Feijóo: "Bildu has achieved more with Sánchez than with all the years of violence"

Pedro Sánchez and his agreements with his government and legislature partners, from Unidas Podemos to ERC and from ERC to Bildu, has managed to get Alberto Núñez Feijóo and the president of the Community of Madrid, Isabel Díaz Ayuso, to walk hand in hand, when before they diverged in messages and tone. 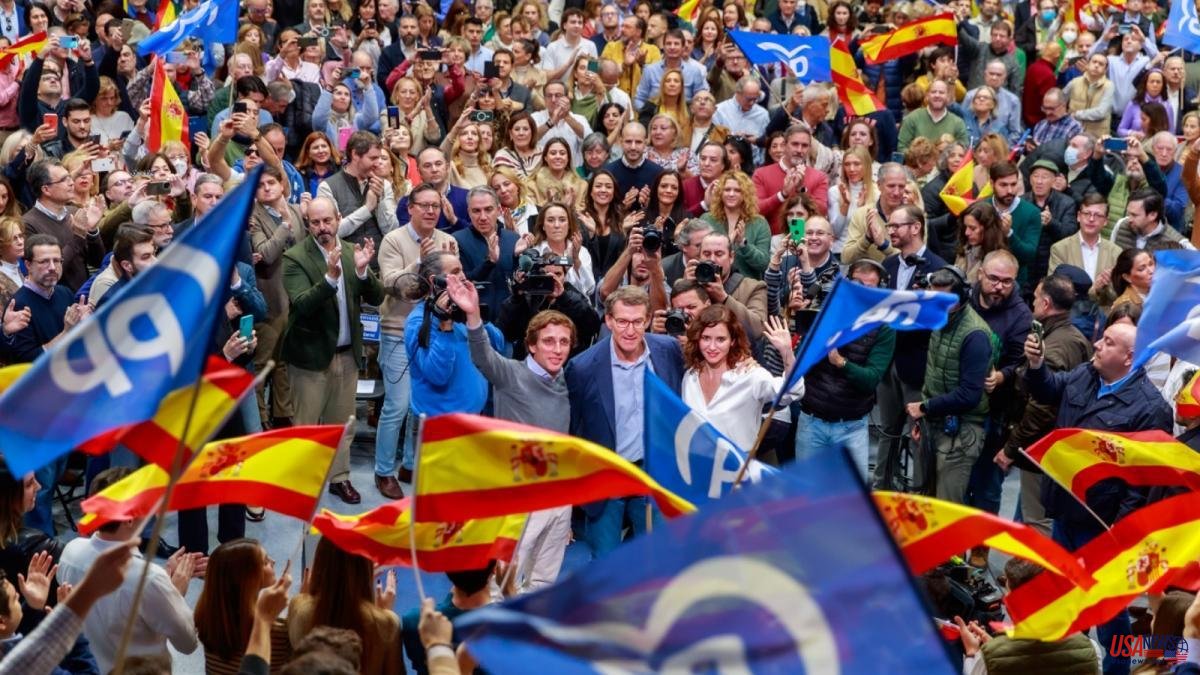 Pedro Sánchez and his agreements with his government and legislature partners, from Unidas Podemos to ERC and from ERC to Bildu, has managed to get Alberto Núñez Feijóo and the president of the Community of Madrid, Isabel Díaz Ayuso, to walk hand in hand, when before they diverged in messages and tone. A new act of the campaign "In defense of a great country", organized after the abolition of the crime of sedition and the consequences of the "Yes is Yes Law". The president of the PP even surpassed the Madrid president, affected by a throat ailment that took away her speech, in the harshness of her speech, and in tone.

The transfer of Traffic Authority to Navarra, at the request of Bildu, which means that the Traffic Civil Guard will leave that community, is for the president of the PP, a straw that breaks the camel's back, for Feijóo who assured that "Bildu- Batasuna has achieved more with Sánchez than in all the years of violence" to which Spain was subjected.

Feijóo denounced that Sánchez has agreed "with Bildu imprisoned for budgets, that he has created a Dialogue Table in which Spain is put at the same level as a part of Spain"; that he has agreed with Bildu-Batasuna the law of our democratic memory, and if they have lied to us, that it could be holding out for four more years, and having Sánchez until 2028."

A series of decisions, those adopted by Sánchez, imposed by his partners, which culminated in the approval "at a quarter to one in the morning, of a change to the Penal Code, so that the crimes committed by the condemned by the Procés, who threaten to commit them again", or that "sexual offenders" are taking to the streets, due to a poorly drafted law. Feijóo also warned the Government that he is not going to reduce his criticism because others are subjecting the Minister of Equality to harassment and insults. "Do not insult, it does not mean kneeling or shutting up, and when you are right, you do not need to insult anyone, not even those who insult us."

The president of the PP, for this reason, distanced himself from the Vox strategy, which, for example, has called for a demonstration in Madrid tomorrow, against the crime of sedition, as one held last week in Barcelona. "My objective is not to fill the streets, but to fill the polls", an argument with which everyone in the PP does not agree. In fact, a voice from the stands of the Magariños Sports Center in Madrid, where the event was held, shouted, "the streets must also be filled", but no one followed him, neither among the attendees, nor Feijóo, who ignored the note.

Feijóo, even more than Isabel Díaz Ayuso, put the people in their pockets, to the point of ending the rally in unison with the people who finished their sentences: "Between Podemos and dignity", "dignity", they all chanted . "Between ERC and the Constitution, the Constitution; between Bildu and the Civil Guard, the Civil Guard; between this PSOE and the general interest, the general interest" and "between Sánchez and Spain, Spain".

Feijóo is also clear about what Spain needs, "a good government", he said, like that of the government of the capital Madrid and that of the Community of Madrid, "and I guarantee that they will have it", which will bring "harmony to this country", who wants to "unite, reunite, sew up what is broken" and he is convinced that he will be able to do it, because "if I did not believe it, I would not submit to all the insults to which I submit every day".

Isabel Díaz Ayuso, with a voice that prevented her from giving her speech the impetus that she normally gives to her speeches, did not stop charging Pedro Sánchez with "the main problem we have, because he wants to sell to Spain", and has turned Madrid "in the element to beat, to end Spain", as it also intends, in his opinion, to end the King, the Monarchy, the Civil Guard, the Spanish language, the Constitution, the Catholics or the union of society " .

Isabel Díaz Ayuso feels attacked by the Government and by Pedro Sánchez, because "we are the main motor and brake on Pedro Sánchez's totalitarian project", whom he warned that "telling the truth is not being extremist", and for this reason he summons the president of the Government that "if he wants to change Spain, that he present himself to the elections with that electoral program, and that he not point out to the rest of us as reactionaries and radicals".

Together with Feijóo and Díaz Ayuso, José Luis Martínez Almeida, leaving aside old quarrels that confronted the president of the Community of Madrid and the mayor of the capital, and teaming up to face the elections next May. And like all the participants, all responding as one, José Luis Martínez Almeida, denounced that "those who want to leave Spain are changing Spain through the back door", and attacked the abolition of the crime of sedition, which in his opinion "It is not dejudicializing politics", as the independentists say, but "a blow to the rule of law", since now, among the public disorders, which are, for him, for example, those that happened in a demonstration in which the demonstrators ended up beating the police, "and between the rebellion and public disorder is the rule of law."

Almeida also complained about the sectarianism of the Government, and how they want to hold others responsible for the consequences of the Law of Yes is Yes, and does not rectify out of arrogance. Almeida, at this point, recalled that the Madrid president is also seriously insulted, "Or was she not called a murderer at the Health demonstration?"