Federer on his retirement: "Playing a doubles match with Nadal would be an absolute dream"

The tennis player Roger Federer will say goodbye to professional tennis this Friday with a doubles match at the Laver Cup. 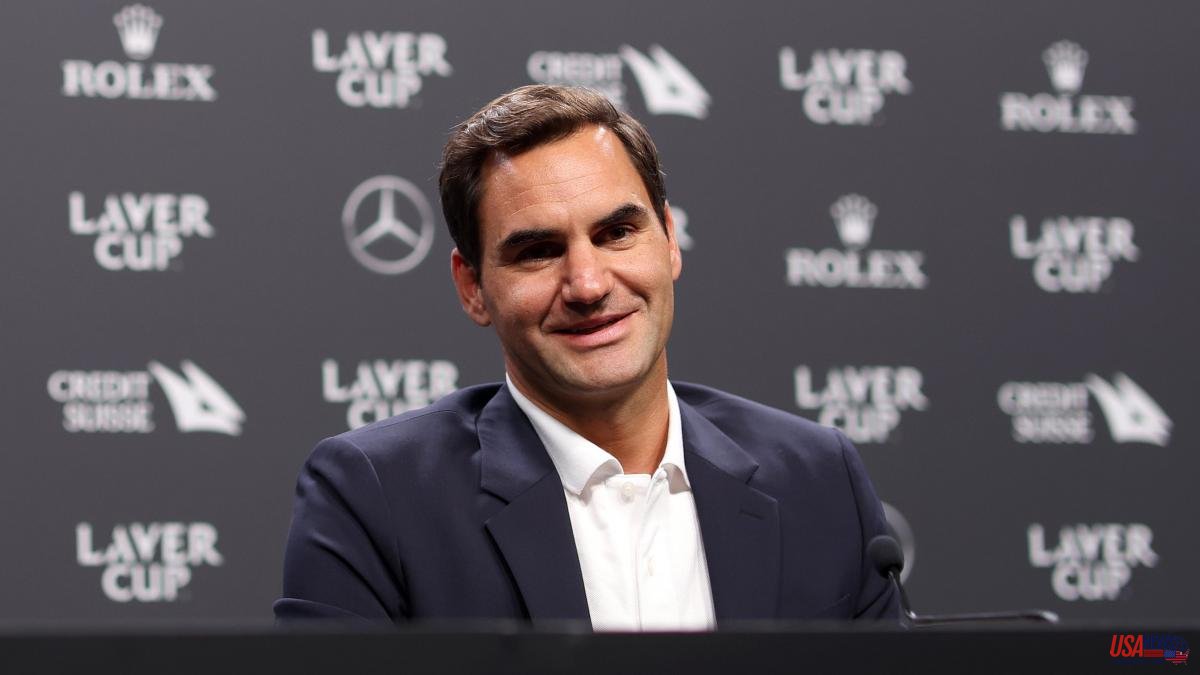 The tennis player Roger Federer will say goodbye to professional tennis this Friday with a doubles match at the Laver Cup. The Swiss confirmed yesterday upon his arrival in London that he will not participate in the individual matches and opened the door to say goodbye with the match that everyone wait, the doubles with Rafa Nadal: “Maybe I can play a doubles match with Nadal. That would be an absolute dream," he assured the Swiss outlet SFR. Something that he confirmed this morning at the press conference prior to the start of the tournament: "The most beautiful thing would be to play doubles here with Nadal because it has been my great rivalry."

"I will not be able to play singles matches, this was quite clear. That's why it was not an option to play the Basel tournament in October. I will probably play doubles here on Friday night and that's it. I asked our captain, Bjorn Borg, if it was okay for me to do that and he told me I could do whatever I wanted," he explained to the press in his country.

The one from Basel landed this Monday in London, trained at the O2 facilities, where he was champion of the Masters Cup in 2010 and 2011, before what will be the last tournament of his professional career. The doubles match with Rafael Nadal will be the reissue of what happened in the 2017 edition and which was an iconic image for the sport since, for the first time in history, two of the best tennis players shared the court.

Federer has also passed by the BBC set this morning, where he has explained how he has experienced the process of his retirement. “The last few years have been, to say the least, difficult. Ever since I played at Wimbledon last year I knew I was on very thin ice. I tried to go back, but there was a limit to what I could do. I stopped believing, to be honest”, he has confessed.

The Swiss acknowledges that after receiving the results of the tests after his last knee injury he realized that the time had come. "Then the question became 'How and when do we announce it?' And this is when it becomes a reality." “I always kept my thoughts away from retirement. I knew that the more I thought about it, the more half-retired I was, and this was not the way to go to work, so I decided to take care of it when I got there. And I did, I took care of it.”

For Federer, working on his farewell speech was, in a way, healing: "I think writing those words was like rehabilitation for me." And he claims to be mentally prepared to walk away from success: “I totally got over it in my mind. Living this has been an absolute dream that I have had for a long time, and I know it, and that is why I am now totally happy to walk away from it.

Roger Federer announced last Thursday his retirement from professional tennis at the age of 41 and after a long career that began in 1990 and lasted until the 2020s and included 20 Grand Slam championships, 83 titles in other tournaments and hundreds of weeks in No. 1 in the rankings. He bids farewell shortly after Serena Williams played what is expected to be the last match of his career at the US Open, marking a significant change for a sport they have both transcended for decades.

Federer last played a match at Wimbledon in 2021, when he lost in the quarterfinals to Hubert Hurkacz. Shortly after that, Federer underwent surgery on his right knee for the third time in a span of about a year and a half. The Swiss star was hoping to play Basel in his home country next month and suggested he might enter Wimbledon for the last time next year. But the recovery and rehabilitation of his knee became complicated and pushed him to make the decision to end his career.