Federal probe: Protest not Divided Because of Trump photo op

An internal government investigation has determined that the decision to clear racial justice protesters in a place in the front of the White House last summer wasn't affected by then-President Donald Trump's plan to stage an Bible-toting photo opportunity at the place. 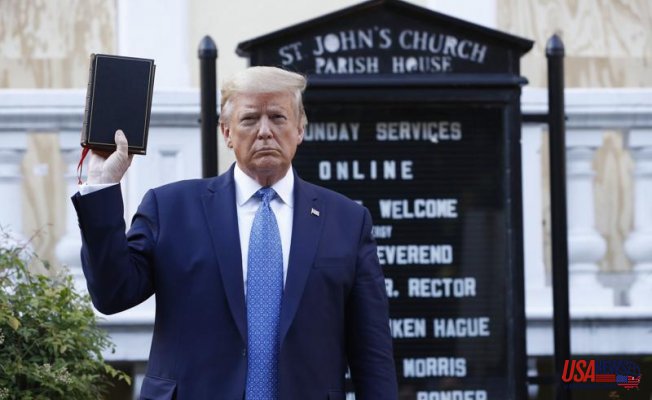 The report published Wednesday from the Interior Department's inspector general concludes that the protesters were removed from U.S. Park Police last June 1 to ensure that a builder might get started installing new fencing.

The demonstrators were protesting the passing of George Floyd, who died after a then-Minneapolis police officer knelt on his throat and pinned him into the floor for approximately 9 1/2 minutes.

Park Police officials had planned to clean the region and"had started implementing the operational program a few hours until they understood a possible Presidential trip to the playground," Inspector General Mark Lee Greenblatt said in a statement accompanying the report.

The report records Trump's attorney general, William Barr, encouraging commanders soon prior to the push to clean the protesters due to Trump, but being disregarded.

The USPP surgeries commander told me he hadn't known until then the President will be coming from the White House and to Lafayette Park. Then hung his head and walked off. The Attorney General subsequently abandoned Lafayette Park."

The church and confrontation photo-op capped a few days of escalating anxiety and sprinkled violence. Nights of all protests over Floyd's death had led to scattered vandalism throughout the downtown region. Trump announced that Washington's mayor, Muriel Bowser, was incapable of keeping the peace and that he predicted in his own safety response.

The report details on June 1, a contingent in the Bureau of Prisons came to the scene , did not obtain a complete briefing and used pepper pellets on protesters"against the USPP episode commander's instructions."

The decisions, which deny any political influence on conclusions and mention fog-of-war confusion because of any missteps, are most likely to be disregarded as inadequate by critics of past summer's crackdown.

Lafayette Park, the Washington nexus of the final summer's national tide of racial justice protests, is beneath Park Police authority; this agency falls under the Interior Department.

It points out that"that the USPP and the Secret Service didn't utilize a shared radio station to convey" and determines that"flaws in communication and manipulation might have led to confusion throughout the procedure."

A lot of the criticism of this clearing, as well as the accusations of political influence, stem from the choice to move in prior to the 7 p.m. curfew which Bowser had put. The drive surprised protesters and has been criticized as unnecessarily confrontational following two nights of clashes and property damage.

The report concludes the Park Police commanders seen the curfew as insignificant. We are a Federal entity. We do not work right for the Mayor."

It proceeds that commanders on the scene"didn't think protesters would comply with the Mayor's June 1 curfew order or waiting would inevitably decrease unrest."