Express practices to shoot down Russian missiles: this is how Spain has trained Ukrainian soldiers

The 19 Ukrainian soldiers who have been trained by the Spanish military in Zaragoza for three weeks have learned how to set up an anti-aircraft system in less than 20 minutes —made up of up to 12 missiles for immediate firing— that allows them to defend their critical infrastructure from Russian attacks. 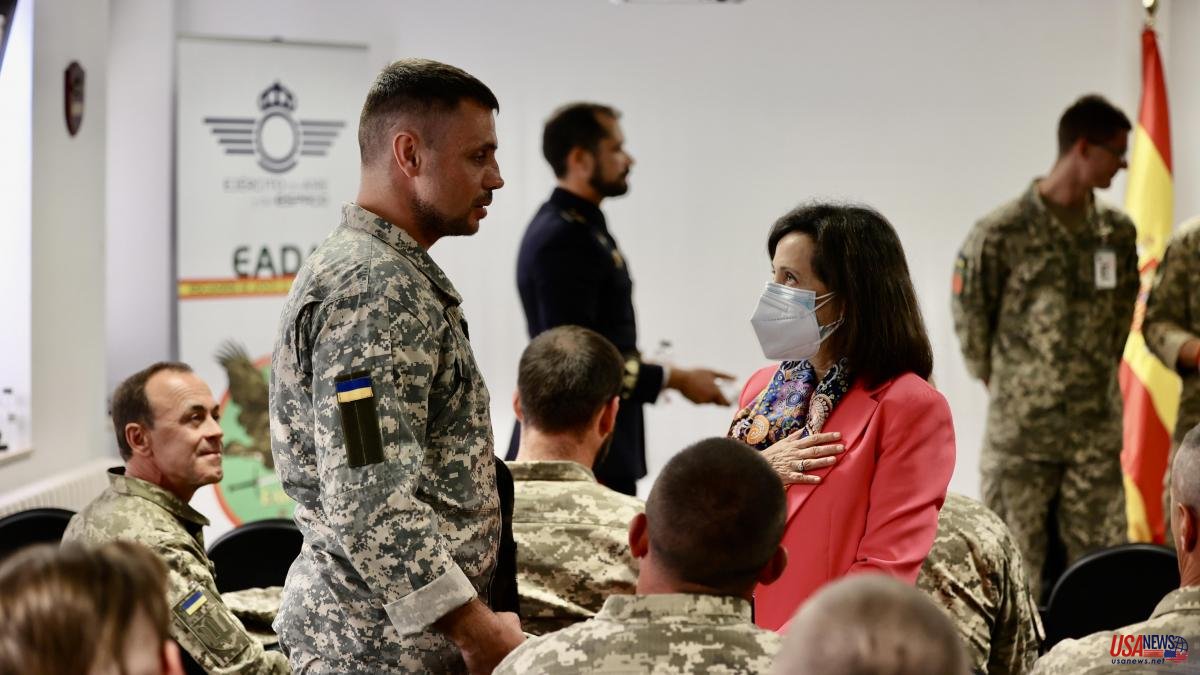 The 19 Ukrainian soldiers who have been trained by the Spanish military in Zaragoza for three weeks have learned how to set up an anti-aircraft system in less than 20 minutes —made up of up to 12 missiles for immediate firing— that allows them to defend their critical infrastructure from Russian attacks. The first promotion, which has also been trained in the use of combat tanks or field artillery, will return to their country in a few days to join the battlefield again with the material donated by Spain. The second will arrive on November 1.

The Defense Minister, Margarita Robles, traveled this Friday to the Zaragoza air base to supervise the progress of the training programme, which, although it was scheduled to take three weeks, has finally been extended to four. There she was received by 19 Ukrainian soldiers, led by Commander Dimitrov Shelekhov. She has assured them that her instruction responds to the "clear, firm and unequivocal" commitment of Spain to achieve peace in Ukraine.

The training has been carried out by the personnel of the Air Deployment Support Squadron (EADE), a highly specialized and versatile unit, which is part of the NATO Response Forces. His participation in UN, European Union and Atlantic Alliance missions is endless. Its chief, Air and Space Army Colonel Carlos Forcano, explained that the main objective of this training is not for the Ukrainians to become experts in the material that Spain will donate — anti-missile batteries and twenty TOA M-113 battleships. —but that they are capable of operating them in adverse situations such as those experienced in the country since the Russian invasion.

For this reason, the classes of these three weeks have basically focused on the Spada 2000 air defense missile system, with which they will fly back to Ukraine. The training has been divided into two parts: one for anti-aircraft system operators and another for maintenance personnel (gunsmiths, mechanics and electronics). With it, the Ukrainian forces will be able to operate autonomously, protecting their strategic points from Russian aircraft or approach missiles.

The Spada 200 allows missiles to be intercepted both day and night and in the most adverse weather conditions. It is made up of a detection center and two fire sections in which the Aspide 2000 missile launcher batteries are integrated. This has a range of more than 20 kilometers.

Tactic assumption with which instructors and students have trained. Ukrainian Military Forces Order Deployment To Defend Critical Infrastructure; for example, a nuclear power plant. Once the detachment receives power, it will not take more than 20 minutes to assemble the two legs of the system: the surveillance radar and the fire section. In this way, they will be able to detect any aircraft at a distance of between 60 and 100 kilometers, for later identification. And, if it were the case, request the fire order... to shoot.

The head of the EADA, Colonel Carlos Forcano of the Air and Space Army, has broken down the main conditioning factors that they have faced at the time of the instructions. First; language. The twenty Ukrainian soldiers who arrived in Zaragoza did not speak English. Of course, neither Spanish. To overcome the language barrier they have had two translators —although they would have liked to have had at least four— “totally trustworthy”, so they resorted to military personnel. Forcano has also highlighted that the time available has been “very little” to carry out the formations in a veteran anti-aircraft system, but with complicated maintenance.

Second Lieutenant Miguel Ángel Escudero explains to La Vanguardia that the Spanish unit is collaborating one hundred percent so that the Ukrainian soldiers return "without any doubt" about managing the system. To do this, they are working long hours that start at 8:00 a.m. and last until 6:00 p.m., to then start maintenance tasks. The last week of the course, the next one, will focus on offering the foreign military the notions to be able to withdraw the system, as well as the way in which it will be repatriated so that, once there, they can make full use of it.