Everyone loves the Trovatore at the Liceu

The miracle of the opera exists. 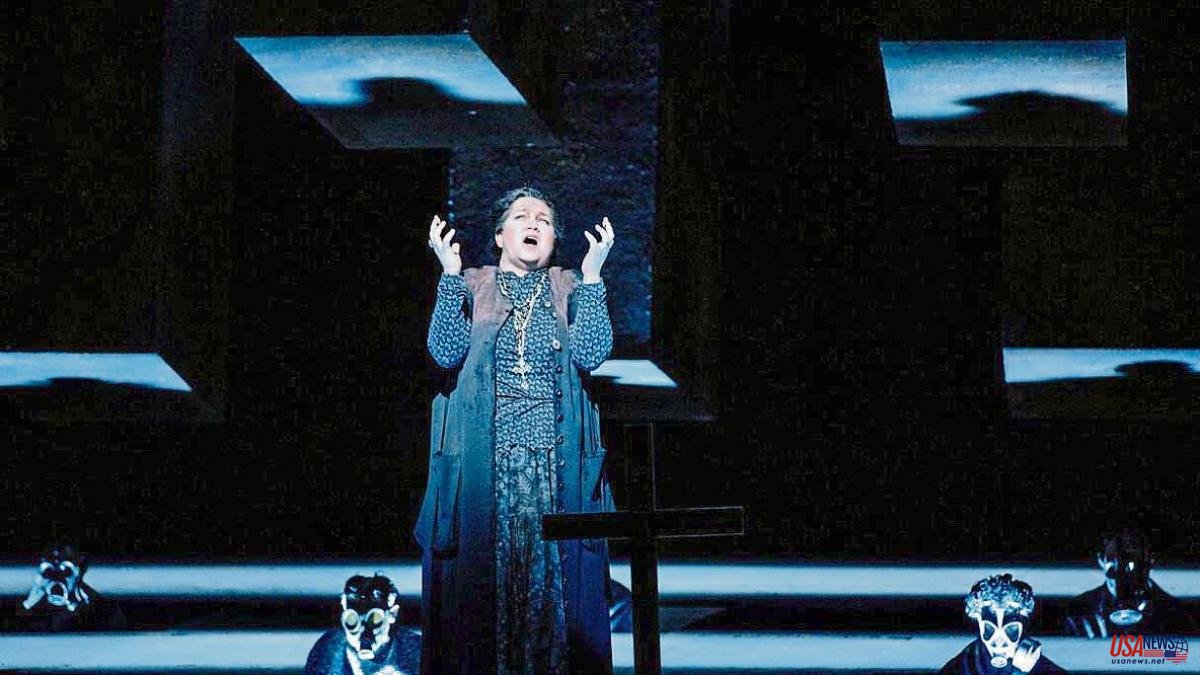 The miracle of the opera exists. And last night it could be seen at the Gran Teatre del Liceu. Among the thousands of elements that can be twisted to each function in this total art, yesterday it seemed that precisely the voice of the soprano was the one that was in danger. As soon as the premiere performance of the long-awaited Il trovatore began, with a montage by Àlex Ollé, the theater's artistic director, Víctor García de Gomar, opened the curtain on the stage to inform the public – with 89 percent capacity – about the status vocal of Saioa Hernandez. The most international Spanish soprano on the current opera scene would sing Leonora as planned... although coming out of a cold and not in full power.

A murmur ran through the stalls. But faith prevailed. Especially among those who had had the pleasure of hearing her sing in her last mimute debut on this stage, when in April 2019 she substituted for her in La Gioconda.

La Leonora by this Verdi –which is in fact the first production by Saioa Hernández at the Liceu– would not sound as loud as one might expect, but it would end up rising to the occasion. The guttural phlegm would be concealed and Leonora's vocal encounters with hers in love with her Manrico, the exultant tenor Vittorio Grigolo, who leaves his skin in each phrase –perhaps to make himself forgive his episode

Like the performance of the Count of Luna, defended by the baritone Juan Jesús Rodríguez, not to mention the thunderous vocals of Ksenia Dudnikova in the role of the tortured and almost insane Azucena... The public adored them like never before. And he kept the final applause going beyond the nine minutes, including the rivalry between the ovation and the booing of the stage crew.

The Verdian force of this opera goes beyond its absurd story, which even connoisseurs of the genre deny and dispense with. “Here today we have come to enjoy the music, don't pretend to understand anything”, said some critic in the audience. Which was not easy, because, apart from the voices and the masterful baton of Riccardo Frizza –it's great that there is Italian blood taking on these Verdian challenges– with a magnificent orchestral and choral result, the public had come to see the production by Àlex Ollé, from La Fura dels Baus. A must that has already been seen three times in Paris – in January the fourth – and that was a hit at its premiere in Amsterdam.

Ollé and his inseparable Alfons Flores (stage director and set designer, respectively) achieve the monumental impact of the Fura brand but playing with 24 versatile sculptural blocks that rise and fall, altering the scene and coloring the montage with enigma, passion, fear and death. Sensations that must be thanked to the brutal lighting of Urs Schönebaum, an ace that at this point should have a fan club.

The fureros have taken to the trenches of the First World War and the cemeteries of the gypsies – with its beautiful choir – the homonymous chivalric drama by Antonio García Gutiérrez that aroused so much interest in Verdi. That abstract space would perhaps have delighted the Milanese composer, passionate about revenge and father-son relationships.

Because this passionate drama about the gypsy woman who avenges the absurd death of her mother at the stake (accused of witchcraft), throwing her own son into the flames, thinking he was the son of the nobleman who had her killed, goes beyond the plot in Yes. When the play begins, this boy is already grown up and has lived believing that he is the son of the gypsy Azucena. And he rivals in love –and in war– with his brother, the son of that Count, without knowing that he is.

It is in that unfathomable and mad state of mind that Ollé wants –and manages– to stick his nose in and maintain, especially at the end, the hectic pace of the action. In a quiet way, without fuss or underlining dramas. We have seen him do this 2022 at the Liceu in three very different titles: Pelléas et Mélisande, Norma and now this Trovatore. A luxury that the Barcelona public had been deserving.