Europe pivots east in the aftermath of the Ukraine war

The definition of the geographic center of Europe has been leading academics for two centuries. 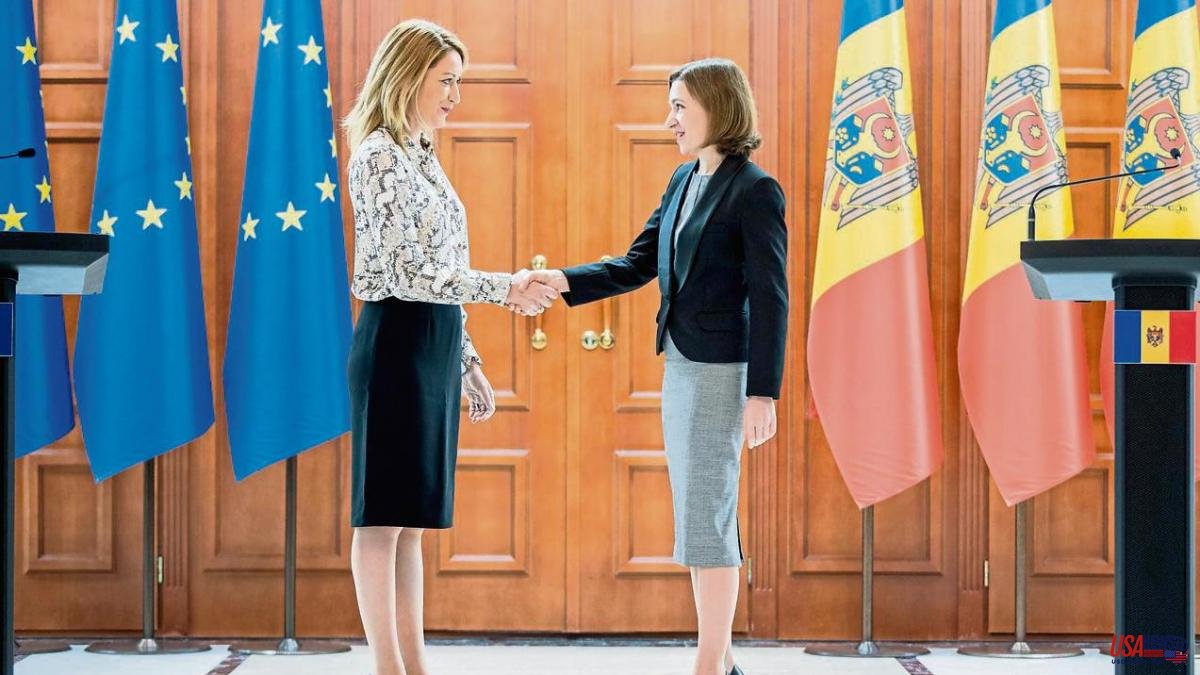 The definition of the geographic center of Europe has been leading academics for two centuries. Questions such as whether it is possible to include all its islands or where Europe ends and Asia begins make the result vary considerably, and there are many towns that at some point have claimed the title, often supported by studies by national geographers.

In case the answer is based on the political borders of the European Union, a clearer criterion, it is not an honor that lasts for a long time. Since its founding, the club's geographical midpoint has moved up to seven times, moving from Saint André Le Coq (France), where it was set by the French Institute of Geography in 1986, to Viroinval (Belgium) and, since the expansion to the east from 2004, to German cities such as Gerlhausen or Gadhein, where it is currently located.

The borders of the European Union have not moved since Brexit took place in 2020. But, regardless of what the geographers and treatises say, as numerous analysts have pointed out, with the Russian invasion of Ukraine on February 24, the club's center of political gravity has shifted seriously to the east. The granting of EU candidate country status to Ukraine and Moldova (though not to Georgia, which is still waiting) has only reinforced this major geopolitical shift.

“There is no doubt that the war has changed the EU's perception of these countries. They are no longer distant countries. They are our neighbors and they are very vulnerable. If Vladimir Putin had succeeded in crushing the Ukraine, it would have been the end of his transformation, because his ambitions would not end there. That is why Ukraine, the United States and other countries say that Ukraine must win this war," said Judy Dempsey, an analyst at Carnegie Europe, from Berlin.

Institutional structures have not changed, but on the ground, changes are taking place at breakneck speed. European countries have broken historical taboos by sending war material to Kyiv and creating common instruments for the purchase of weapons. Thanks to its macro-financial aid, the EU has avoided the bankruptcy of Ukraine and in 2023 it plans to cover with 18,000 million euros almost half of the current expenses of the State. Since March, the continental electricity grid has been connected to Ukraine and Moldova, a country of 2.5 million people to which Brussels has given hundreds of millions of euros in recent months to help it cope with high energy prices.

Russia's energy blackmail, which has slashed gas shipments to the country, has aggravated internal tensions in Moldova, a former Soviet country with steadfast European ambitions now led by Maia Sandu's pro-Western government. Russian bombing has caused severe power outages in the country, a circumstance that has increased its reliance on the power plant located in the breakaway region of Transnistria. The Romanian government has signed an emergency decree to supply electricity to its neighbor at a reduced price while European leaders try to wrap up Sandu as much as possible and have convened the next summit of the European Political Community in Chisinau.

“Russia's war against Ukraine changes everything. It puts an end to the uncertainties and guesswork of the past. The security and stability of the whole of Europe are threatened. Military action against Georgia and Moldova cannot be ruled out, Vladimir Putin is projecting his malign influence from Paris to Budapest and Belgrade”, warns a recent report by the Austrian Erste Foundation and the British European Institute of Human Sciences.

When nine months are about to expire from the start of the war, neither the community institutions nor the European governments have yet a clear plan to assume the new geopolitical reality, but from the academic world they warn that the traditional models are no longer useful. François Roux, former Belgian ambassador to the EU and an analyst at the Egmont Institute, points to the year 2024 as the time to make decisions, coinciding with the 20th anniversary of the great enlargement of 2004, the so-called European big bang, when a dozen Eastern and Baltic countries, followed by Romania and Bulgaria in 2007.

"It cannot be ruled out that there will be a move to an enlargement model based more on intergovernmental agreements to include countries like Ukraine, Moldova or Georgia for political reasons, as collateral damage from the war," says Roux, who welcomes breaking with the logic that has prevailed up to now, a method directed by the Commission and based on the obligation to satisfy certain economic and political criteria. This system has led to accession processes taking 15 or 20 years, periods that have called into question the credibility of the entire process.

Integrating the Balkans, analysts agree, must be the priority. There are different academic organizations analyzing alternatives, generally based on the old theory of concentric circles, allowing certain countries to participate immediately in the European internal market, for example, as proposed by the Erste Foundation. Other possibilities are to help the candidate countries to converge from the economic point of view through greater access to European programs, promote programs to bring civil society closer or invite their political leaders to participate in European meetings even without the right to vote. .

As already happened in 2004, although those fears did not materialize, the displacement of the European center of gravity towards the east worries France in particular, uncomfortable in its increasingly peripheral position on the European map in the face of the more central and preponderant role of Germany. , at a time when, as a result of the war in Ukraine, it has decided to invest massively in its army.

A few weeks after the start of the war, the prime ministers of the Czech Republic, Poland and Slovenia visited Kyiv to express their support for the government of Volodimir Zelensky. They were the first Western leaders to do so and the trip aroused suspicion but many others immediately followed suit. When Emmanuel Macron, Olaf Scholz and Mario Monti traveled to Kyiv by train to meet with Volodymyr Zelensky, Romanian President Klaus Iohannis joined the meeting.

Will the Eastern and Baltic countries assume a more central role in the EU this time? In Dempsey's opinion, “all this shift will not have much of an impact as long as Poland does not change its attitude towards judicial independence and the rule of law. Poland would have a much more influential position in the EU institutions if it did its homework at home." With the Russian invasion of Ukraine and the energy crisis, “the Baltic and Eastern countries are like 'we warned you and you didn't want to listen'. However, they will not have a major role as long as Poland does not solve its problems and these countries begin to forge alliances with Western European countries to defend their points of view.

Whatever happens with enlargement, whether or not the EU finds new formulas to integrate the candidates, the club's center of gravity is increasingly closer to Purnuskes, the small Lithuanian town where French technicians set the geographical center of Europe at 1989.