Espanyol is left without a feat against Sevilla

feat, although sometimes it does not reach him, as was the case. 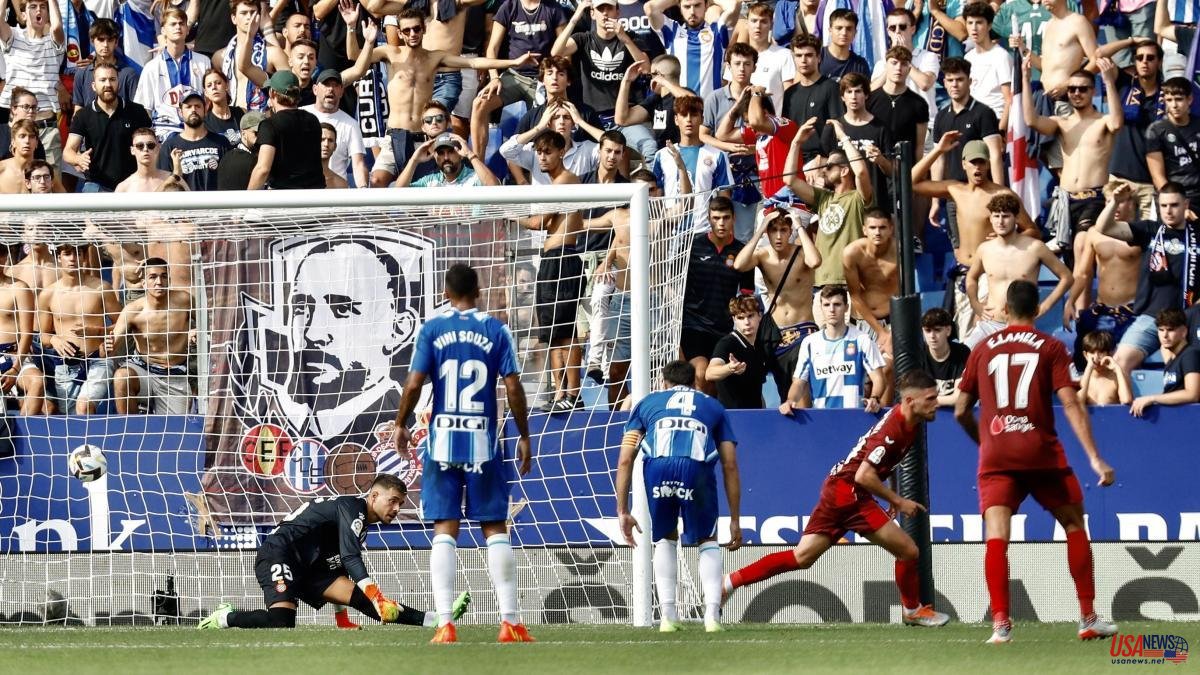 feat, although sometimes it does not reach him, as was the case. However, there does not seem to be an impossible mountain to climb for this team, which never gives up a game no matter how uphill it is. Diego Martínez has instilled a passion into everything his players do that is contagious. And although the afternoon is born crooked and is greatly complicated with a 0-3 before the break, as against Sevilla, nobody lowers their arms. But football lives not only with passion, but with goals. And there the parakeet team is scarce, conditioned in excess by the absence, now definitive, of De Tomás, who is negotiating these days his departure to Rayo Vallecano. For this reason, and due to rude defensive errors, Espanyol was defeated against a Sevilla in which Lopetegui arrived questioned and with losses in defense.

Nobody could deny that this Espanyol is competitive. Despite everything and everyone. Although in the first minute of the game Cabrera leaves his area to avoid a throw-in and that makes him late for Erik Lamela's coverage. Although Sevilla scored the second after a lucky rebound from a corner. Also despite the fact that Cabrera, in his 100th game, made his second serious mistake of the day and gave Carmona another goal. It does not matter if whistles are heard, if the fans demand the resignation of the board with 0-3 before the break. Martinez's team never loses faith. That's why he was able to get into the match with goals from Joselu and Braithwaite and come very close to equalizing.

The beginning conditioned any possible approach. The first minute of the game had not been completed and Lamela took advantage of a mistake by Cabrera to score. A very hard blow, but Martínez's men, who repeated the eleven at San Mamés, accepted the challenge and applied high pressure and a lot of intensity. They were twenty-five minutes of parakeet harassment in which Sevilla seemed to ask for the time. But Lopetegui's men resisted, and Carmona scored the second after a rebound from a lucky corner.

This new goal was accused more by Espanyol. The filigrees of Isco and the appearances inside Lamela and Oliver put them to sleep, and they only woke up just before the break with a shot from Joselu on the post. But the parakeet goal did not come and the third for Sevilla did, by the work and grace of Cabrera. Incomprehensibly, the center-back stopped fighting for a ball inside his area and Carmona scored again without opposition. Serious mistake of the Uruguayan, who is not going through the best moment of his form. There appeared the whistles of the stands against the board. But they didn't last very long. Well, before the break, Joselu converted a penalty at the hands of Acuña inside the area.

There was hope for Espanyol, who redoubled their offensive in the second half. He managed to close the gap thanks to Braithwaite, again a scorer. The Dane has found his place in Cornellà. He has fit like a glove on a team in need of idols. His goal re-ignited the stands, which would not stop pushing their team. Lamela's expulsion for a double yellow five minutes from the end was a new fuse. Joselu had the tie in a header. Like Cabrera, who needed to get even. But the goal did not come.

Another three points that go away. But this Espanyol has not stopped believing. Diego Martínez works so that his team believes they are better than they are, so that they can compete head-to-head against anyone, even though when he looks towards the bench he only finds a handful of good homegrown players

Incidents: Match of the fifth day of LaLiga Santander played at the RCDE Stadium before 20,135 spectators.