Espanyol falls to an earthly Madrid

Few defeats will be so painful and at the same time so sweet for this Espanyol. 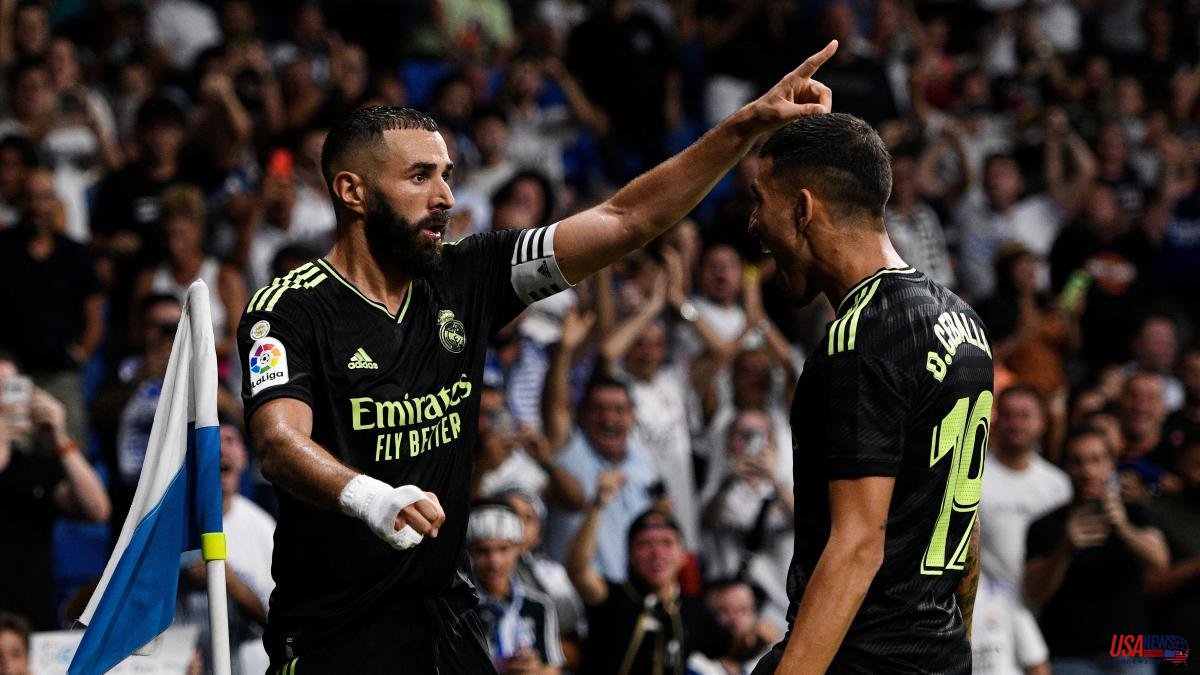 Few defeats will be so painful and at the same time so sweet for this Espanyol. Enormously conditioned by planning (17 players have left and only seven have arrived), and with the Raúl de Tomás case kicking off with four days to go before the market closes, the parakeet team stood up to a whole Real Madrid, only capable to break them at the end with two goals from Benzema. Vinícius and Joselu had scored before. With more caste than class and with more pride than style, but Espanyol had the champion against the ropes despite everything. Again three points that fly. Diego Martínez's team has only added one in the first three days, but his project is not in danger, because this Espanyol, despite everything, spreads enthusiasm.

Diego Martínez showed audacity with his initial proposal, which did not change with respect to previous games. The technician's predicament is immovable despite the circumstances. High pressure, accompanied by a good dose of work and verticality with the ball. Although the commitment as a flag is not enough to be more protagonist with the ball, and more if the current champion is in front without other interweekly commitments that mislead him. Puado, now recovered, and Calero, instead of the expelled Sergi Gómez, were the only changes. And despite the intentions of the parakeets, Madrid did not have to work hard to take over the game in a start of low pulses. Rudiger and Kroos entered an eleven designed to build from the ball and for 20 minutes he made and unmade the white team at will, including a goal by Vinícius after an improper defensive error by the Blue and White defense.

In the abyss that exists between the two teams, the main difference is that Madrid is a totally curdled team and Espanyol is a beardless man who pursues a dream with worn out soles. Everything works relatively easily in the white team, where a built-in wardrobe like Tchouameni is capable of assisting with Modric's class if enough space is left for him. They left it to him and the result was Vinícius's goal. In that first section, each slalom of the Brazilian was a whiplash that made the RCDE Stadium shudder, increasingly aware that only a miracle could make his team score points.

Espanyol got the rage to finally step on the rival field. Without pause or concert, but those of Martínez managed to see Courtois more closely. First it was Vini, the other, the one who shot from the front. Then Cabrera finished off a corner. In the third it was Joselu who, in a double shot, found the tie on the edge of the break. The Galician adds his second goal.

And so, with the feeling that the game was more about faith than football, Espanyol started the second half deserving of the goal. Fist grazed the second. Espanyol was not only alive, but also pressed all over the pitch, taking many risks, and was capable of submitting the Whites from set pieces. Courtois took a prodigious hand to a shot by Joselu from inside the area.

Ancelotti reacted with Camavinga and Rodrigo. Madrid had entered a general daze, numbed by a series of bad decisions and by the effectiveness of the parakeet pressure. His arrivals, however, were increasingly dangerous. Espanyol did not give up anything and was condemned to suffer blow after blow in inferiority. Lecomte, criticized in the first two days, finally emerged with a save of enormous merit to a shot from Benzema. But Madrid ended up finishing off the job with two goals from the Frenchman, the second after Lecomte's expulsion. The parakeet team never gave up, but with these wickers little more can be asked of Diego Martínez and his men. Four days before the market closes, it's time to feed this illusion with signings

Incidents: match corresponding to the third day of LaLiga Santander played at the RCDE Stadium before 25,778 spectators.