The corporation has come under fire for its treatment of last week's storm. 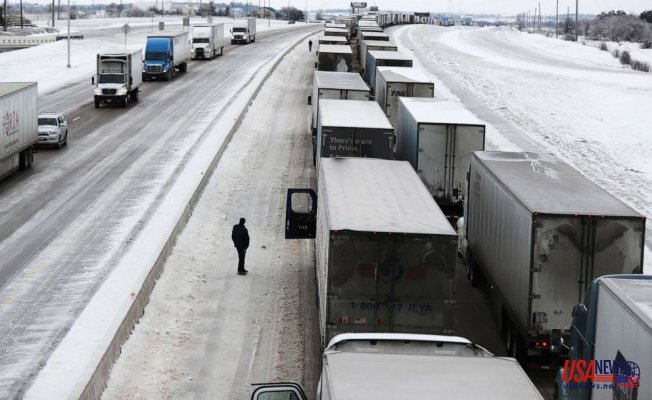 Morgan & Morgan, a Florida-based national law firm with over 700 attorneys, filed a class-action lawsuit on Tuesday against the Electric Reliability Council of Texas (ERCOT), alleging that the nonprofit corporation"completely failed" to plan for its cold climate despite multiple warnings, leading to the collapse of its own electric network and resulting in widespread blackouts.

"Despite receiving multiple unambiguous warnings, ERCOT's alleged failure to guarantee dependable generating capacity during expected conditions forced many of its customers to survive harmful freezing temperatures for long periods of time," lawyers Mike Morgan and Rene Rocha said in a statement Tuesday. "This wasn't the first time ERCOT has failed to prepare and plan for cold weather. But rather than studying the course of its past failures, ERCOT yet again disregarded its responsibilities to its customers. Over 70 people have died and millions of others have suffered emotional and physical trauma due to ERCOT's alleged gross negligence."

The lawsuit has been filed in a district court of Texas' Harris County on behalf of a putative class that comprises all current retail customers of ERCOT -- millions of Texans --"who lost electrical services or bottled water services during the week of February 14, 2021 as a consequence of ERCOT's failure to ensure sufficient generating capacity," according to the complaint.

ERCOT, which manages the flow of electric power to over 26 million customers in Texas, representing 90% of the nation's electric load, allegedly received warning as early as Feb. 9 an impending winter storm may jeopardize the integrity of its own electric network if reasonable measures weren't taken, according to the complaint. Texas Gov. Gregg Abbott, that has been critical of ERCOT from the storm's aftermath, issued a disaster declaration in all 254 counties on Feb. 12 before the severe weather, which the lawsuit claimed"should have further emphasized the requirement for ERCOT to take suitable measures to ensure system performance under the anticipated problems."

The storm moved into Texas on Feb. 14, blanketing the Lone Star State in ice and snow. During a media briefing last Thursday, ERCOT president and CEO Bill Magness confessed that the Texas power grid had been just"minutes or seconds" away from a devastating and complete failure, as electricity demand generators and increased fell offline on the night the storm struck. By the morning of Feb. 14, more than 4.4 million customers were without electricity in Texas, according to information gathered by PowerOutage.US.

The elongated electricity outages combined with record-low temperatures caused freezing pipes to burst upon the state, depleting water reservations. Huge numbers of people were also under a boil-water advisory as a result of concerns about potential contamination as water treatment plants suffered power outages.

Mariaelena Sanchez, the named plaintiff in the lawsuit, was one of those that lost electrical solutions and potable water for"a few days" due to ERCOT's alleged failures to plan and prepare for the deep freeze, according to the complaint. During this time, Sanchez had to use snow to conserve"the little food she had that wasn't spoiled by the outages," according to the complaint.

The suit alleged that the"total state energy requirement during the cold weather occasion peaked at about 69,000 megawatts -- considerably less than the entire capability of the ERCOT system or typical peak demands in summer." ERCOT supposedly failed"to reserve enough capacity to meet such foreseeable demands" and"to evaluate the integrity of its infrastructure, the ecological limitations of its power sources, and how abnormally cold weather can impact the availability of its energy resources," according to the complaint.

Though winter storms are much less prevalent in Texas as elsewhere in the United States, the complaint mentioned that the state has experienced quite a few chilly weather events over the last couple of decades. The suit alleged that"ERCOT has repeatedly disregarded its responsibilities" through the decades to plan and prepare for the effects of cold weather on its electrical grid. The complaint cited winter storms in 1989 and 2011 that induced ERCOT's systems to fail, resulting in widespread blackouts and human suffering.

The litigation is demanding a jury trial and is seeking class certification, injunctive relief, damages and litigation costs for the plaintiff as well as other class members proposed in the criticism.

This is not the only litigation to strike ERCOT in the aftermath of the historic cold breeze. The household of an 11-year-old boy who died during last week's electricity outages in Conroe, roughly 40 miles north of Houston, filed a $100 million suit contrary to ERCOT and Entergy Texas, an electrical power generation and distribution firm.

Meanwhile, the ERCOT's leading board leaders announced Tuesday that they'll step down amid outrage over the business's handling of the storm. Four board directors, including the chairwoman and vice chairman, submitted their resignations, which can be effective Wednesday. A candidate for a board director position also stated that he was withdrawing his name from consideration. All five live outside of Texas, that just intensified scrutiny of ERCOT.

In a letter to ERCOT board members on Tuesday, the four departing leaders reported that the"recent concerns about out-of-state board direction ."

"we would like to acknowledge the pain and suffering of Texans during this past week," they wrote. "Our hearts go out to all Texans who have had to go without electricity, heat, and water during arctic temperatures and keep to manage the horrible consequences of this emergency."

In another letter to the Public Utility Commission of Texas, which manages ERCOT, the board director candidate stated he had been requesting the withdrawal of his name"to avoid becoming a diversion," citing"concerns concerning the propriety of out-of-state directors."