ERC maintains its course and shakes off Junts' internal differences

To choose between quinoa salad or ravioli and between sirloin or cod. 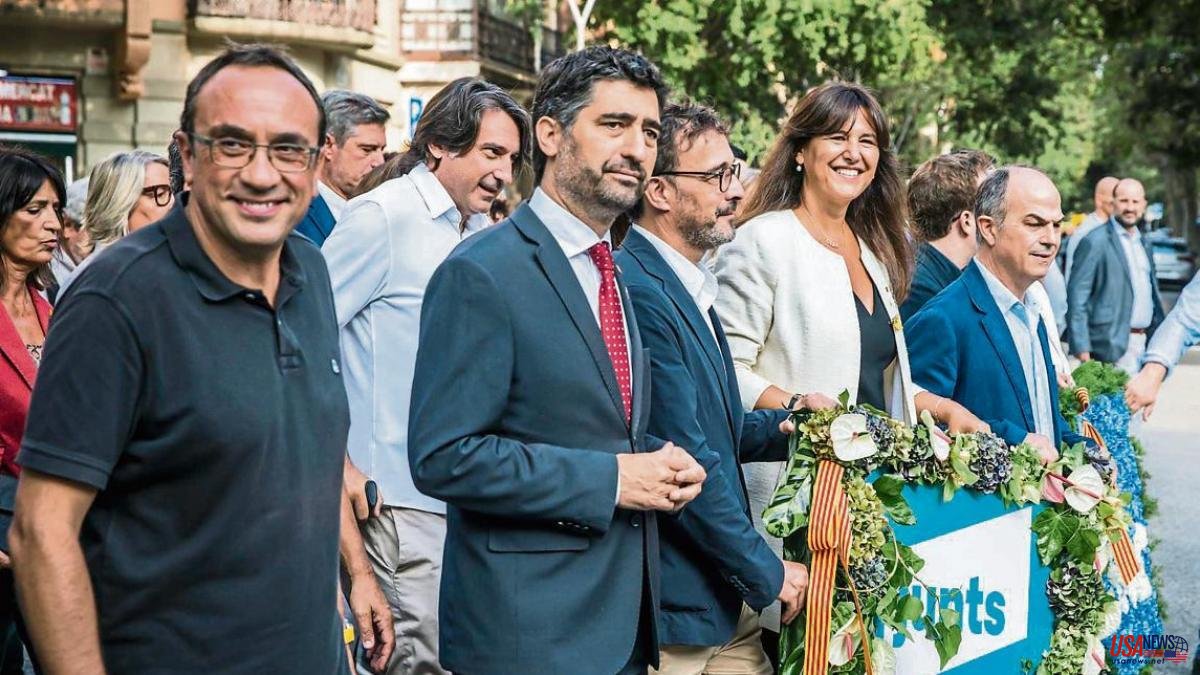 To choose between quinoa salad or ravioli and between sirloin or cod. The only thing that went well in Wednesday's six-hour match at the Pedralbes Palace was the beginning, the food.

Just after finishing it and wiping his lips with a napkin, Pere Aragonès took action on the Govern crisis, the umpteenth, but also the most serious. The president spoke at length. To the five representatives of the leadership of Junts, he especially made it clear that he had perceived a lack of “loyalty”. "Also in the last days", with the Onze de Setembre in between. And he reproached the postconvergents for not complying, in his opinion, with an important part of what was agreed in May of last year: to give room for the dialogue table between the Spanish and Catalan governments.

What came after the meal only served to confirm that ERC and Junts are not swallowing, that they can't stand it and that no one, for now, moves from their line. JxCat seems increasingly determined to consult the militancy if it has to leave the Government if there is no progress towards independence; Esquerra maintains its course, that of dialogue, "as long as a credible alternative is not offered" and accuses the postconvergents of wanting to "save face" by entangling them, not only in their internal disputes, but also in the dilemma of whether to break the Government or the match. “What do we have to save? The internal divisions of Junts”? Republican sources ask. "We can't solve their problems."

In ERC they believe that the scenario of Junts outside the Government is "unlikely". They don't want that to happen. But the Republicans grow up and assure that in case the threat goes ahead, "if by any chance the budgets are approved later, we will endure a good part of the legislature." The priority for those of Oriol Junqueras is a shock plan to deal with the economic crisis and “that happens by approving the budgets”.

In the six hours that the meeting lasted on Wednesday, there were speaking turns and breaks to huddle, catch some air and then return to the accusations and the replies between ERC and Junts. According to sources, in some of the shifts Jordi Puigneró, vice president of the Government and in the ranks of JxCat, wondered at what point there had been disloyalty. The brains of the ERC representatives – Laura Vilagrà, Marta Vilalta, Josep Maria Jové and Sergi Sabrià, in addition to the president – ​​reeled in their heads at the memory of the denial of authorization on Tuesday by the vice president of the rejection by the Minister of the Presidency of the DUI proposed by the ANC for 2023.

Laura Borràs, Jordi Turull, Josep Rius, Albert Batet and Jordi Puigneró himself were also surprised. Who does not comply with the investiture pact, in his opinion, are the president and ERC when the strategic direction of the independence movement has not yet crystallized – a kind of new General Staff of the procés. Or when there is no coordination between the two pro-independence parties in Madrid.

Sources consulted assure that Borràs spoke on a few occasions and that when he did, it was to recall the ERC's endorsement of her suspension of functions as President of Parliament.

On Esquerra's part, the five representatives had the feeling that the other five from Junts were not going at one. They identify Josep Rius as "the envoy" of Carles Puigdemont, who is firmly willing, according to sources, to leave the Government for fear of acting as a crutch for an ERC that is not accelerating on the national axis. They group Turull and Batet as supporters of remaining in the Catalan Executive. They leave Borràs aside, as Puigdemont would be in favor of getting off the car, “but for many more reasons”. And they believe that Puigneró is not well regarded in his own party. To the point that in ERC they think that he "dances the chair" of the Government. "Sena [Jaume] Giró", they rumor as a substitute.

Be that as it may, in ERC they are not willing to change their strategy based on dialogue. A DUI is not in your plans. They are in favor of dressing me slowly because I am in a hurry. “Not because you are in a hurry you arrive earlier, but you have to choose the best path”, Aragonés explained yesterday in this line.

That strategic direction of the independence movement that Junts demands cannot be given, according to the Republicans, if trusts are not rebuilt first. “Coordinate to do what? We do not want to pretend that we agree and generate false expectations”. In addition, they point out that the order of the factors is important: there will be a joint table of the pro-independence actors if a common point is found beforehand in the strategy towards independence. “What use is coordination if we don't share a strategy beforehand”.

"The problem is that on the other side there is no strategy, beyond centrifuging all its internal conflicts in ERC and stabbing the one next door", they underline from Esquerra.

Among the senior officials of Junts, Victoria Alsina asked to "focus the debate" on whether "ERC will comply with the Govern agreement or not". The Minister of Foreign Action, like Jaume Giró, are in favor of not breaking up the Government. The head of Economy has made it clear publicly this week.

Yesterday Junts once again set a profile and met with the ANC in Parliament. Puigneró had already met with the entity on Tuesday and affirmed, countering Vilagrà, that "all options must be assessed" for independence. Yesterday, however, Dolors Feliu, president of the Assembly, said that JxCat does not endorse her DUI: "They want independence without putting anything on the table."