Former Italian Prime Minister Enrico Letta (Pisa, 1966), Secretary General of the Democratic Party (PD), has been the greatest defender in Italy of the continuity of Mario Draghi as Prime Minister. 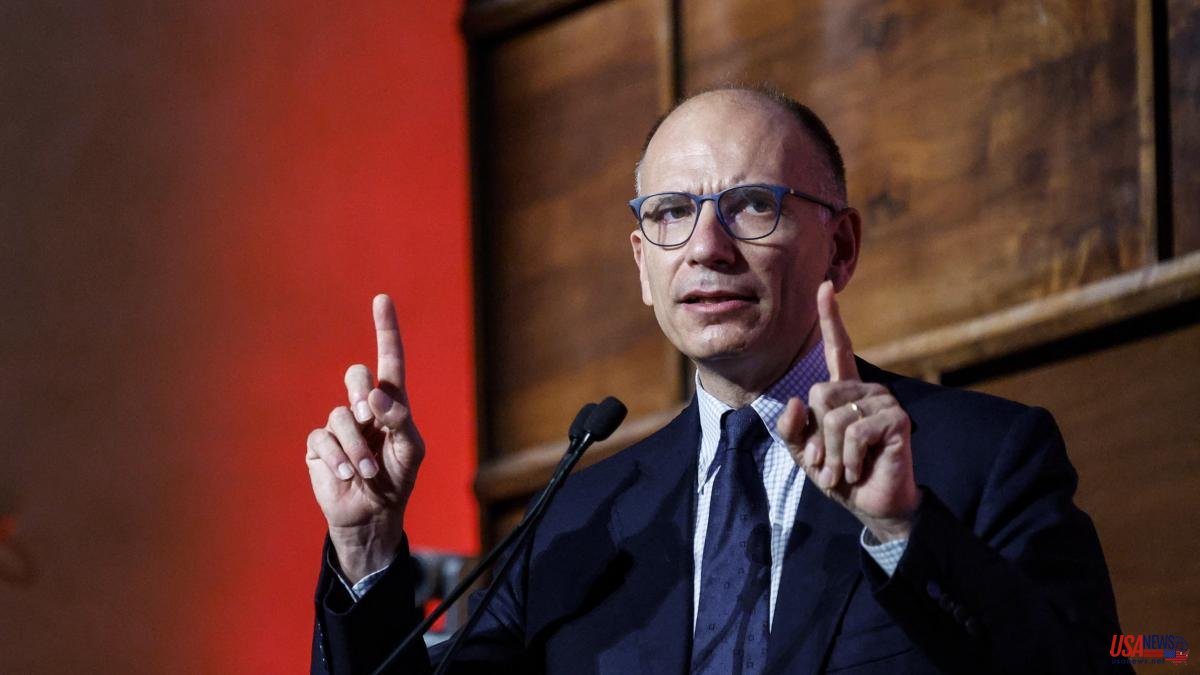 Former Italian Prime Minister Enrico Letta (Pisa, 1966), Secretary General of the Democratic Party (PD), has been the greatest defender in Italy of the continuity of Mario Draghi as Prime Minister. He speaks with La Vanguardia a few days after three important members of the coalition of national unity of the former president of the European Central Bank (ECB) abandoned him and forced early elections to be held on September 25. His formation is second in the polls, behind Giorgia Meloni's far-right Brothers of Italy.

How do you explain the political earthquake of these last days?

It is an incomprehensible betrayal against Italy by three parties that have decided to withdraw their trust in Draghi: La Liga, Forza Italia and the 5-Star Movement (M5E). It is very serious for the country.

You were very optimistic the night before the Senate vote. He had met with Draghi. Was what was going to happen expected?

I did not expect. The day before the real problem was convincing Draghi to try again. All of us, when we heard Draghi ask Parliament for confidence, we thought that the biggest problem had been solved. Nobody could think that there could have been this change in these other matches.

What consequences will the fall of Draghi have for Europe?

The first negative consequences are for Italy. Italy loses a strong, solid, authoritative government that has made many important reforms. You lose a great opportunity to have a long period of stability and to use the recovery plan money well. For Europe it is a very big damage because Draghi, in this year and a half, has been a reference at European level: to support the Ukrainian people, for energy, monetary policies and for the ECB's decision to create an instrument against the premium of risk. He has also been an important partner for Spain. I have seen an important and positive relationship between Draghi and Pedro Sánchez. They have worked very well together. That is why the betrayal of Draghi is a betrayal in the interest of Italians and Europeans.

Do you think Italians understand the reasons for these early elections? Is it a failure of the political class?

It is a failure that people do not understand. People are afraid, they are dismayed, they do not understand what is happening, they are deeply angry with politicians. But there are two policies, the policy that has decided to sink Draghi and us, those of us who have supported him. I believe that we deserve the trust of the citizens because, despite the polls of the previous weeks, and despite the fact that the electoral law favors coalitions, I am convinced that we can contest these elections. Because we are consistent with what we have done these days.

The polls give the winners to the right, led by the post-fascist Giorgia Meloni. Europe may have to deal with a founding country with the extreme right at the forefront.

That is why my effort will be total to try to build a winning alternative that can convince the electorate of the left and center, especially the voters who have believed in the Draghi government and who are angry today. Many of these voters were from the right of Forza Italia and also from the M5E. I'm sure we can try to convince them.

Italy has traditionally been seen as a bridge between Moscow and the West. With Draghi it was unconditional support for Ukraine. Putin's former friends, who can now govern, have brought him down. Is Italy's support for Ukraine at stake?

I hope not, but I am very worried. Because objectively Berlusconi and Salvini have always expressed words of great appreciation towards Putin. Their links are obvious. In this I am afraid, it is one more reason to make an effort.

Draghi seemed the best suited to negotiate the interests of southern Europe in the next important community discussions, such as the stability pact or the principle of unanimity. Will Italy, and therefore the south, be weaker in these discussions?

I'm afraid so. Because Draghi made a very powerful speech in the European Parliament on the question of the necessary evolution of Europe, a Europe that can be more federal, more pro-European. Not the Europe of nations separately or of nationalism, but the one that is capable of thinking that together we are stronger.

You defended the creation of a great alliance to face the right in the elections. After the M5E has betrayed Draghi, do you still consider that they should be part of it?

I have said from the beginning that Wednesday's event could change the way we organize Italian politics. Whoever brought down the Draghi government is not compatible with us in this electoral campaign. It is evident that it is a hard step, but serious and consistent. We had said that it would be an element of rupture and unfortunately, it has been so.

But, given the current electoral law that benefits coalitions, wouldn't a broad front be better to combat the extreme right, as was done in France?

We will try to speak with the voters of the M5E, but we would be less credible if we continued with an alliance with the one who has brought down Draghi.

Which parties are you willing to probe? Also Renzi?

We will talk with the others in the next few days, and we will assess. We will focus on ourselves, but other forms of alliance can be made in a logic of continuation of the Draghi project.

Will he present the campaign as Draghi's project against the populists?

Yes, but not only this. Because Draghi's project was a project of national unity and did not take on important battles that we want to carry forward, such as citizenship for young immigrants, the law against homophobia or assisted suicide. These are all important things for a different idea of ​​Italy that were not on Draghi's agenda. The future is that agenda with the great principles of the PD for a more inclusive society.

In recent years the working class has gone from voting for the left to allowing itself to be seduced by the populist songs of the extreme right. It happens all over the world. It is also part of Meloni's success. What can your left do to get them back?

A campaign focused on social and civil rights. We must speak to the weakest Italians to tell them that we will work against inflation, which is the most unequal thing that can exist. This fight has been affected by the fall of the Draghi government.

Forza Italia, which is part of the European People's Party, has participated in this fall...

A very wrong choice, also on the part of Manfred Weber, in supporting this decision. It is the most populist they could have taken. They are on their way to dissolution within the League.

Is Italy experiencing one of the most decisive moments in its history?

These are key elections, like few other times has happened in our country. They are also for Europe and for relations between Spain and Italy. The leader of the Brothers of Italy is a close friend of Vox. If we win, she wins an Italy that wants to dialogue with an open and progressive Spain. If Meloni wins, with the most retrograde.