Enric Mas' record is full of good positions, several top-10 finishes in the Tour de France and the three second places in the Vuelta a España, the last one three weeks ago. 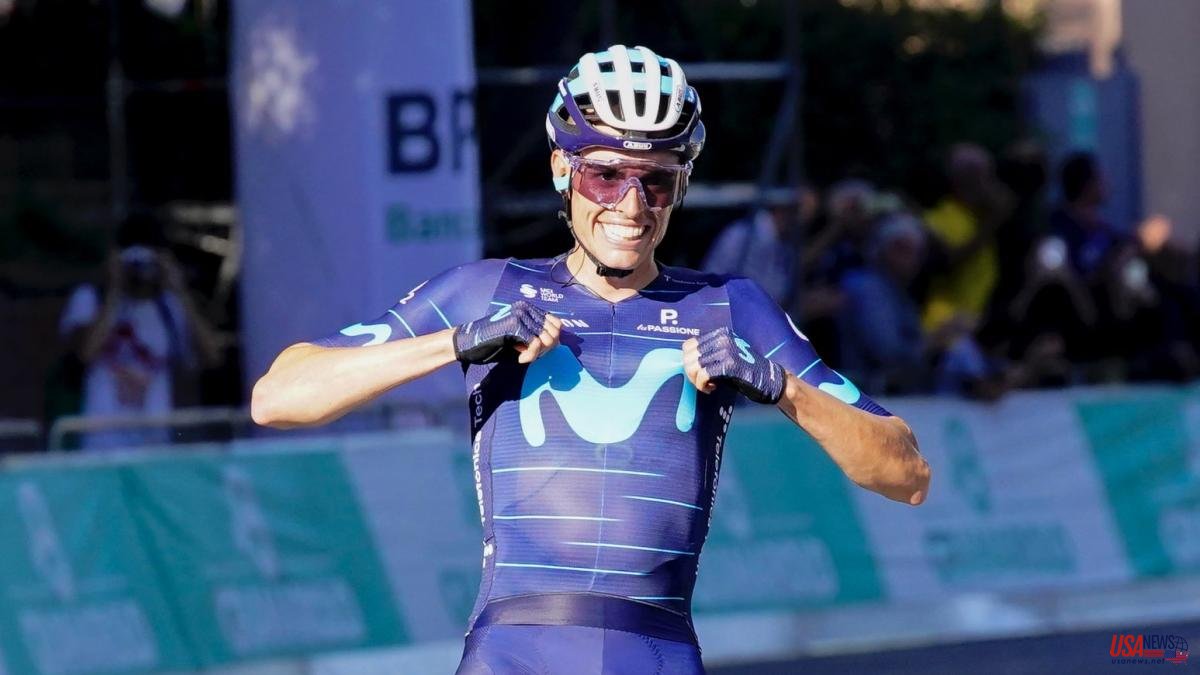 Enric Mas' record is full of good positions, several top-10 finishes in the Tour de France and the three second places in the Vuelta a España, the last one three weeks ago. But important victories are missing from the Balearic cyclist's resume. Beyond the stages in Andorra and in Arrate in 2018, he had a hard time raising his arms. Too much for a climber like him. But the Movistar leader took the winning instinct out of him in the last kilometers of the Giro dell'Emilia in which he even beat the winner of two Tours Tadej Pogacar.

At 27 years old, it is only the sixth time he has been on the podium. It is not the most renowned, but it is perhaps the most brilliant triumph of his career, due to the hardness of the Italian classic and the rival. It was a victorious face-to-face with the fearsome Slovenian, who had to give in to Mas' great pedaling on the final ramps. The Mallorcan, as Evenepoel did in the World Cup, took advantage of the state of form that the Vuelta a España has given him, where only the Belgian surpassed him, to end that conservative label.

Accustomed to being criticized for not being offensive and launching attacks, this time Mas ran with an unusual ambition and rarely seen in him. On the penultimate ascent he was the one who best responded to Pogacar's acceleration. But on the fifth and last climb to the Sanctuary of the Madonna of San Luca, on the outskirts of Bologna, no one could withstand Mas's attack, who went alone for victory with 1.8 km to go.

“I was able to finish. Everyone knows who Pogacar is. For me it is a satisfaction to have won in an attack in which he was also involved ”, he said at the finish line, with a boost of morale, the winner, who crossed the banner with a smile from ear to ear.

The Balearic, who had to leave the Tour due to a positive for coronavirus, ends a losing streak of more than 17 months without a victory. You have to go back to the third stage of the Volta a la Comunitat Valenciana in 2021. Then, in April 2021, he won at Alto de la Reina.

The end of the Giro dell'Emilia suited Mas better than Valverde, as it was a straight up climb. The two arrived in the group of five, along with Pogacar, Pozzovivo and Urán, who played the stage. But while last Thursday, in the Coppa Agostoni, the Mallorcan worked for the Murcian (who was second), this time he had freedom of movement and took advantage of it. A success -before only José Iván Gutiérrez, also with Banesto, in 2003 had registered his name in 105 editions- that he needed for time but above all for form and emotion. Mas can win big and big.

“Lombardy is the last objective of the season but it is 60 kilometers more than today. We know that those classics are good for Alejandro. Today was today and we were able to achieve victory”, he analyzed the last monument of the season, on Saturday 8, where he will meet again with Pogacar and Vingegaard, who this Saturday won the stage again in the Tour of Croatia and is the new leader .