England thrash Sweden and advance unstoppably to the Wembley final 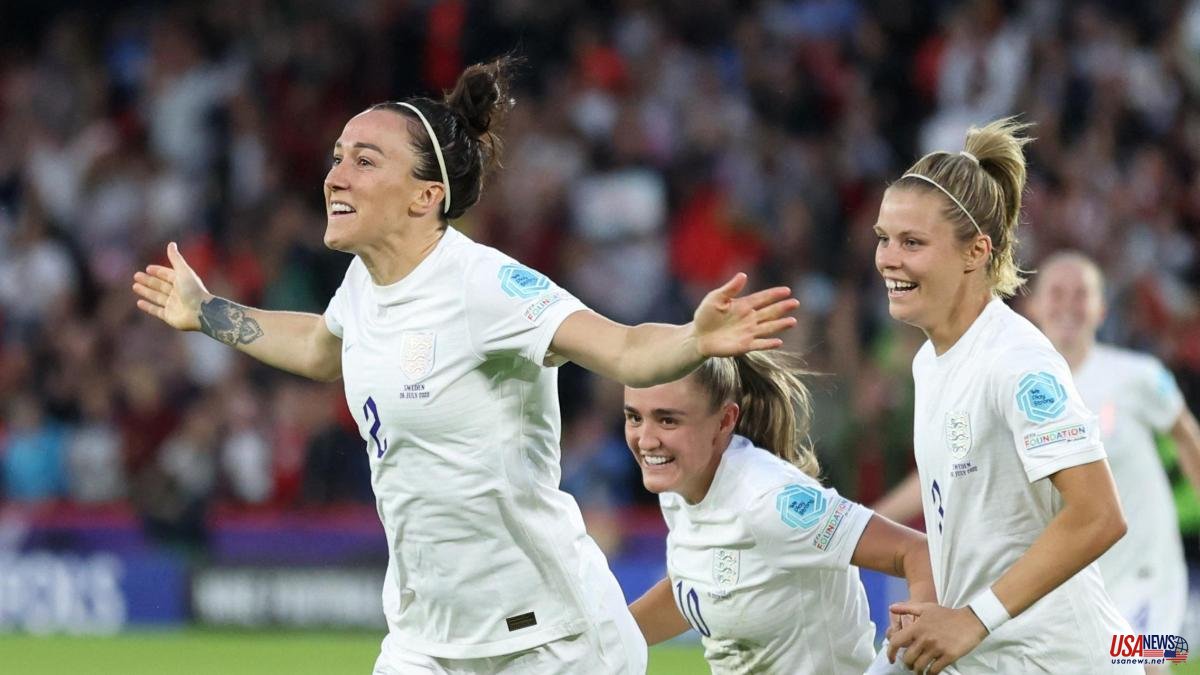 England advances unstoppably towards Wembley. They swept the group stage, scoring 14 goals and conceding none, eliminated Spain in the quarterfinals showing that they also know how to suffer and yesterday they shone again against Sweden, the last hurdle before Sunday's grand final, whom they thrashed 4-0 , including a goal from Barça player Lucy Bronze, who wants to emulate Lieke Martens and arrive in Barcelona with a title under her belt.

The host began suffering against a Sweden that came out to bite. Blackstenius crashed a ball into the crossbar that silenced the much larger English crowd at Bramall Lane, but they resisted the onslaught and took advantage of the opportunities. With ten minutes to go, Beath Mead, on his way to the tournament's Golden Boot with his sixth goal, appeared to send a powerful shot into the back of the net and unclog a much more fluid England from then on. And as soon as the second half began, Lucy Bronze appeared to head in a corner kick taken by the omnipresent Mead, MVP of the semifinal. If in the first half the attractive duel between the azulgranas on the flank had been won by Fridolina Rolfö, in the second it was Bronze who shone, sealing the triumph of the hosts. With half an hour to go, Alessia Russo unleashed the madness in Sheffield with an exquisite backheel into the back of the net and Fran Kirby sealed it 4-0.

England's first European Championship is getting closer and closer and the whole nation is turning to the Lyonesses. It's coming home (it's coming home), Bramall Lane sang yesterday, an unofficial anthem that the crowd chants every time the players jump onto the pitch. A melody actually called Three Lions that was created in 1996 by some BBC comedians together with the British band The Lighting, coinciding with the 30th anniversary of the World Cup won by the men's team. A satire that reviews the poor results of England throughout history, which became number one on the UK charts and, ironically, today serves to encourage its players.

And it seems that yes, that the first European Championship in England is approaching. The expectations were very high, the whole country is aware of its soccer players and in the cradle of soccer, every corner is covered with advertisements and posters of its heroines. The duel against Spain, praised throughout the country, brought more than nine million viewers to their televisions and further raised the spirits of a nation that is letting itself be inspired by its women's team. Even British legend David Beckham confessed that this selection was inspiring girls like his daughter Harper and praised England's play in a message of encouragement he sent to the Lionesses before the semi-final.

Faced with such expectations, the pressure is also very high, but Sarina Wiegman's team does not shake their legs. Yesterday she returned to live up to what was expected of her and became the first finalist of the tournament. The Dutch coach wants to repeat in England the feat achieved in 2017 when she lifted the Netherlands team to the title in the tournament in which they also played host. Will she end up coming home, as the song dictates? Wembley will dictate sentence this Sunday.