Emiliano Monge: the writer who was struck by lightning and survived

The mother of the writer Emiliano Monge (Mexico City, 1978) contains the world. 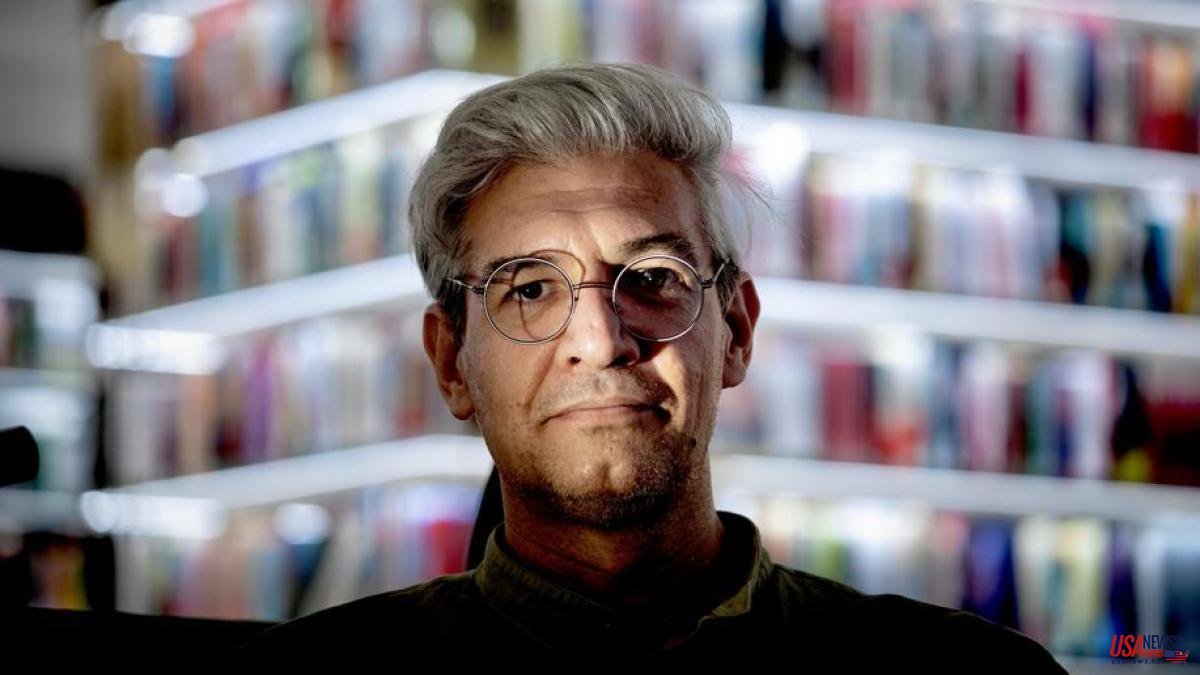 The mother of the writer Emiliano Monge (Mexico City, 1978) contains the world. Looking through it is like looking into the hole of the Aleph, understanding good and evil, the enigmas of humanity, its pains, sorrows, violence and savagery, but also its joys. Everything is in the life of this elderly, sick woman, confined to a wheelchair since childbirth. The entire 20th century and bits of the 21st pass through her body, with its technical advances and its new moral codes and even her songs and her novels. If our mothers usually say that 'you never call me', Emiliano Monge's mother has no reason to complain because her son has made her the absolute protagonist of one of the best books published this year, Just before the end (Random House), which could also have been titled All About My Mother.

The work could perfectly pass for a fiction novel, such is the degree of astonishment caused by some of the adventures narrated in it. "The foundations are the biographical - he explains, visiting a bookstore in Barcelona -, and the fiction is the finishes or the plants, the limits are more porous than in my previous biographical book, Not telling everything", from 2018, in which he narrated the lives of his grandfather, his father and himself. Monge is, in himself, living proof that what the book tells is real, since we see, for example, the tattoos that his aunt wanted to erase.

-I do not have it already. The lightning struck me in April 2020, and I survived, but in Barcelona and Cuba two others also fell very close to me. When you get struck by lightning, it changes your polarity and makes it more likely that you will be struck by another.

Perhaps that ray has given Monge strange literary superpowers. The story of her mother, the daughter of a psychiatrist and a pianist, is that of an invisible woman in a macho society who is attacked by a strange degenerative disease. “The facts are real –points out the author– in more than 90% and all the characters exist. Fiction enters only in the dark zones, when I couldn't find out”.

His psychiatrist grandfather suffers from serious death threats and drives himself crazy to the point of –in the book– making his wife fat with pills so that others do not seduce her. “My grandfather changed the history of psychiatry, he helped put an end to electroshocks, he had been a medical expert in cases of serial killers, whom he treated.”

Plagued with scientific metaphors, one of the themes of the work is mental health, the limit between sanity and madness. "The difference between the madman and the creator is very small: the musician, the chef, the humorist suddenly generates a metaphor, just like the madman does, but he keeps it inside, he does not show it outside."

The gossip detector captures details in the work such as Mario Vargas Llosa rejecting, due to classism, being attended by the son of the blacksmith of his town, who has become a doctor. "That anecdote was told to me by the doctor himself, offended by the centuries, who treated me for a throat condition at the Hay Festival in Arequipa, he revealed the story to me as it is."

In addition to wild hazing at UNAM, disturbing Freudian images appear, from the semi-castrated father to the mother's demand that Monge massage her thighs... "That part cost me a lot to tell, whore, much more than the loss from the father's egg. I became a reader based on literature and psychoanalysis books, there were many in my house, and obsessively underlined with fluorescent markers”. And her homosexual relationships? "That didn't cost me, on the contrary, at that stage I saw her very happy, it took me much longer to understand why she stayed with my father for so long." What has upset her the most, who has already been able to read at least half of the novel, “are the scenes in which she loses control of her sphincter, at the presentation of the book in Mexico, she burst into the room saying twenty times: 'I didn't shit on him!'”

Addictions to gambling, alcohol and other substances are addressed throughout the family history. "My grandfather's last two children have to live with that completely decomposed father, who suffered from a very strong addiction to things that the doctors themselves prescribed, derivatives of morphine and cocaine, it was a time when doctors medicines to the beast, some were destroyed”.

"Overcare is another theme of the book -he continues-, that is something that also destroys, for example they took me to hearing tests because they said they had seen me listen to the TV from the side... and then I never had anything".

The narrative voice –in the second person, giving rise to many other voices– is the one that rules, printing an unusual speed to a book of more than 400 pages. The structure is orderly and chronological, year after year, which contrasts with the narrated chaos.

Another tidbit: there is a cameo of Queen Letizia appearing in Mexico. A writer of hers remembers her from her crazy Mexican years of hers “and she makes her gesture with the finger of ‘shhhh’, that happened just like that to Eliseo Alberto. As a young man he did what he wanted and was happy”.

Monge's mother cooked for García Márquez. She “she lived by having banquets. The cultural world was small, she cooked for friends' parties and she had to serve the food at the celebration that Gabo made when he was going to publish One Hundred Years of Solitude”.

Another reading that the book allows is the feminist one, since it is also a chronicle of the oppression of a woman, not only because of direct violence, but also because "she wants to be a doctor and they don't let her, she wants to live surrounded by friends and not the They leave, she wants to be her and she can't. She talked about invisibility, how she keeps them quiet and stigmatizes them”.

The news events of the newspaper library are integrated, year after year, in the narrated history, and many of these great news have to do with psychiatry. “I have collected data like this since I was studying the race, more than once I was about to throw it away. Here they appear linked to memories”: the contraceptive pill, the space race, the discovery of antimatter...

“My mother began to read the book, passionate to know what was going on. 'But, mom, if it's your life! How can you not know how it ends?’”