Edith Bruck: "There is a black cloud that is growing over Europe"

At 91, Hungarian writer Edith Bruck is a literary sensation in Italy with her latest book, Il pane perduto (The Lost Bread), although she has been writing since shortly after she was released from the death camps. 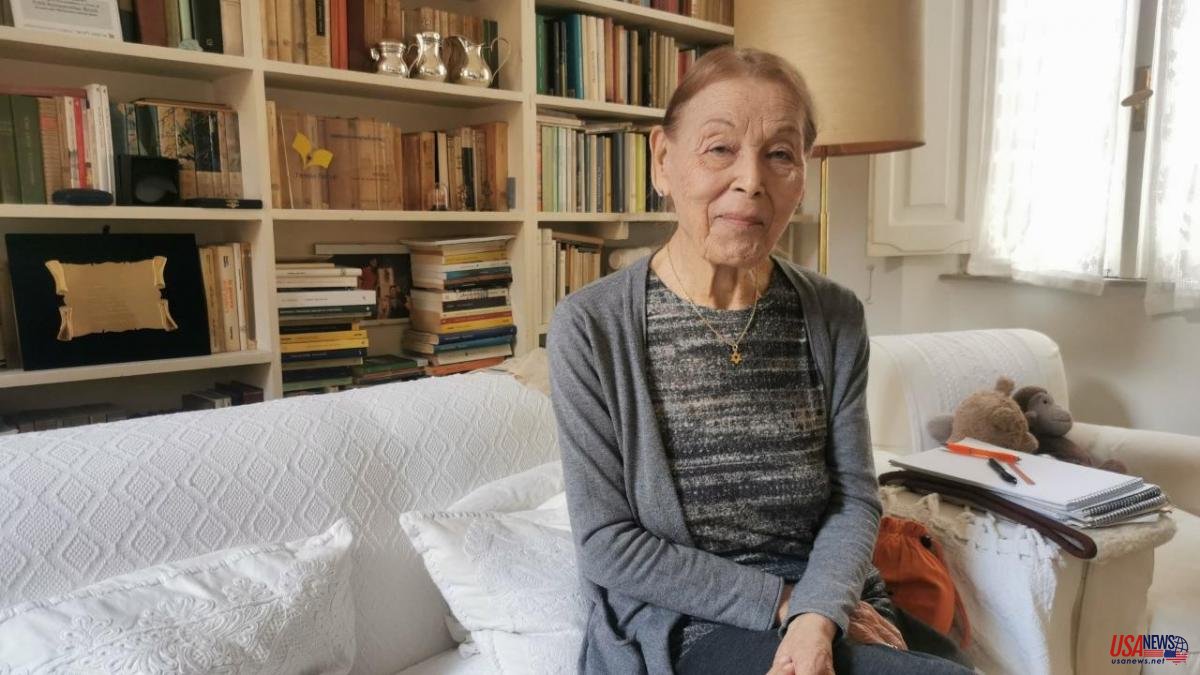 At 91, Hungarian writer Edith Bruck is a literary sensation in Italy with her latest book, Il pane perduto (The Lost Bread), although she has been writing since shortly after she was released from the death camps. In it, she recounts the horror she experienced after she was deported at age 13 from a small Hungarian peasant village to Auschwitz. Her work in maintaining her memory has earned her the recognition of President Sergio Mattarella and also of Pope Francis, who went to her house in the center of Rome to listen to her five "moments of light", the five saves from her.

What was the first light?

We arrived at Auschwitz in May, we got off the wagons and they made the selection. The wolves howled and the Germans screeched: right or left. No one knew what it was, but to the left was the gas chamber. Since I was under 16, they sent me to the left, with my mother. But the last German caught me, kicked my mother, who ended up on the ground, and she told me to go to the right. It was the last time I saw her.

Then he went to Dachau.

We ended up in an officers' castle which was a wonderful paradise because we were peeling potatoes or cabbage, we were in contact with food. One day, a cook came up to me and asked what he called me. Maybe you don't understand what this means... I was practically bald. It was 11152, that was my name. He kept asking me and I didn't dare answer. I didn't understand it, it was too human a phrase. In the end, I said: Edith. She told me that she had a little girl like me, and she took out a small comb from her white uniform. It was a miracle, it meant that she existed, that she was a human person in the Shakespearean sense. The Pope was impressed when I told him.

The third was when a soldier left me an inch of jam. Like everyone else, he tried to suck on the leftover sides to eat something. Later, in Landsberg, he was doing heavier work, and a soldier threw me a glove with a hole in it. It was incredible, a human gesture, that's why I called it light. The fifth was even worse. We had traveled a thousand kilometers on foot because the liberation army was arriving. Half died on the way. They took us to a room full of dead people on the floor, naked, and we had to drag them to a store. Two people there told me that if I survived, I should tell.

And so he did.

Yes, that's why I go to schools in Italy, it was the last wish of a dying man. Then they promised us that if we took some vests from the concentration camp to the city we would have double the soup. We were 15 women. I did a little bit of the trail and couldn't make it, and my sister told me to throw a few out. These are times when there is no solidarity, so the rest also began to throw them away. In the end, the guards couldn't walk because the snow was full of vests. They asked who had started it. I took a small step and they beat me to death. Then my older sister attacked the German. In the end, the German made me get up. She said that if a dirty, filthy Jewish bitch had the guts to raise her hand to a German she deserved to survive. That was the fifth light.

Then he began to write.

I have always returned to some extent to the same argument. Not for me, for the boys, for the future. I receive thousands of letters from young people and I make a book about it. Since this last book came out I haven't stopped for a day. Journalists ask me about politics, I have become a kind of monument. As if they had discovered now that I write.

Let's talk politics. Why do you think Giorgia Meloni won in Italy?

Because fascism has never been uprooted, just as anti-Semitism has not been uprooted. In his party they are all old fascists. There is an economic and political crisis. First it was the virus, then the war, and there is discontent. People wait for someone to come along to make it better. She has been very clever at propaganda, and the others have not. Today it is necessary to scream so that it reaches the heart. She screams, like she did in Spain. They are empty words. She says that she is a patriot. Has she ever fought a war? Woman. We are so many women... Christian? Christians have waged wars since the beginning of the world.

Meloni says that fascism is a thing of the past.

It is not past, because it is the daughter of that amniotic fluid. She grew up with fascism, with the survivors of the Italian Social Movement, she has been in politics since she was 15 years old. She has been voted fascist, but also by normal people, in the peripheries, because she is very intelligent and she has gone where no politician has gone. Enrico Letta did not go to the peripheries. He is a gentleman, he is a teacher, but energy is needed here, to shout.

What are you afraid of?

It scares me that all of Europe is going to the right and always further to the right. She sent a message to Vox in Spain asking them to win the elections. She congratulates her Viktor Orbán, from Hungary, from my country. Now they will be much more animated. That's the danger. Also in France, in Poland, throughout Europe. There is a black cloud that is growing over Europe and it is very dangerous with the war in Ukraine. It cannot be indifferent to us.

Why do people start to prefer the extreme right to the traditional one?

They will always be more radical. She says that the family is men, women and children, there will be no freedom for homosexuals. In Hungary you can't even pronounce that word. Orbán has said that the Hungarian purebred cannot be mixed. We're going back to the 30's, it's crazy. Let's not forget the Weimar Republic. We are at the same point. What future awaits us?

Was Italy in too much of a hurry to close the fascist stage?

They denied everything, all the countries, including Hungary. We have not reckoned with the past. The only country that has succeeded is Germany, because it felt more guilty. Now it will be the hundred years of the March on Rome. I don't know if it's a coincidence.