"Early in my career I killed quite a few priests"

After ten years without writing, the queen of Nordic "noir" returns. 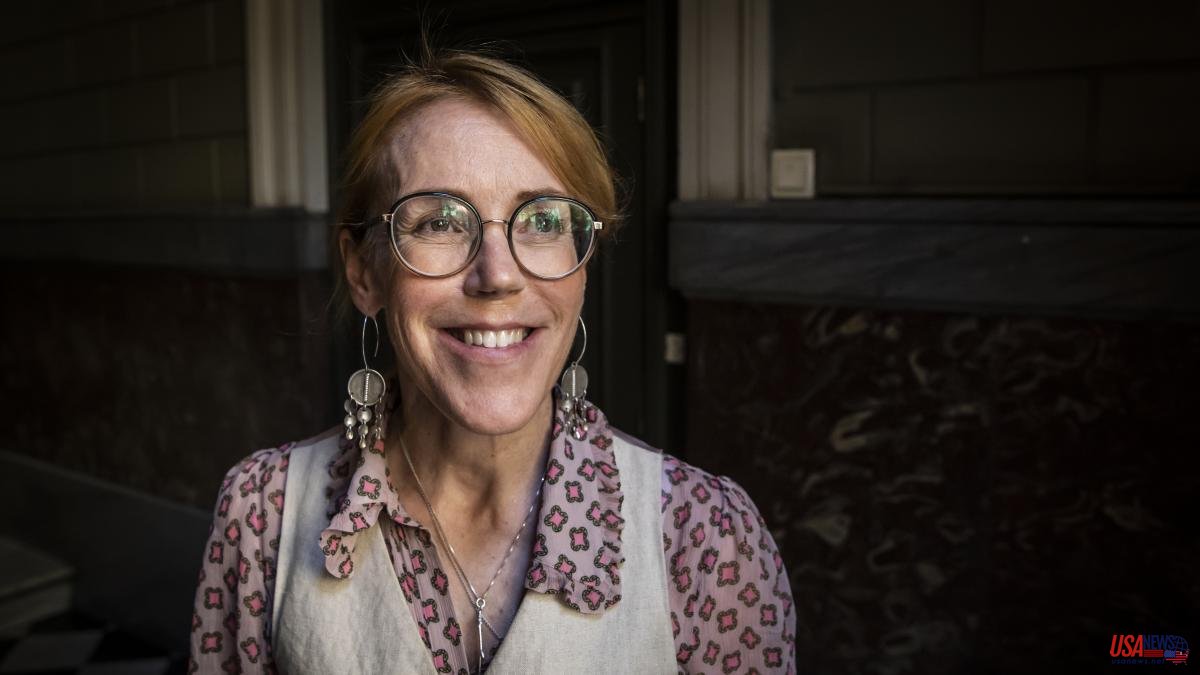 After ten years without writing, the queen of Nordic "noir" returns. With the publication of “The sins of our fathers” (Seix Barral) / ”Els pecats dels nostres pares” (Column), Asa Larsson concludes a journey: it is the latest installment of the stories of her researcher, the ineffable Rebecka Martinsson . "She fed me for twenty years, I am grateful to her."

This time Rebecka is asked by forensic pathologist Lars Pohjanen to investigate a murder that occurred sixty years ago. The body of the father of a famous boxer has just been discovered in the freezer of a remote farm.

Assa Larsson (Kiruna, 1966) is small and close, nothing to do with the stereotype of distant or cold Nordic. She says she feels happy and, finally, freed from personal burdens that interfered with her profession.

With this book you close a circle and say goodbye to your main character: Rebecka Martinsson. What will she miss about her, who has accompanied her for so many years?

I think I'm going to continue to have a very intimate connection with her and I feel like I'm going to communicate with Rebecka like we do with our dead relatives. Think that one of her lives with her characters for years, they live with you, you carry them on your back, so that we are not going to separate just like that...

In this installment you see a tired woman… do you think you have ever been totally happy?

I think that through this saga it is clear that she is a woman who "absorbs" all the energy of her work. She wanted to be an excellent professional. Not just solving crimes, she wanted to go further, and that has left her exhausted. She at some point she even forgets if she nudged someone to get there. She is ambitious.

It has been ten years without publication. Why that disappearance?

Because my son, at eleven years old, stopped reading. And his friends, suddenly, too. That worried me a lot. I started talking to them and I understood that someone had to start writing for that age group. Total, a project of ten children's literature books.

Is it true that without the maternity leave of your first daughter you would not be a writer?

That's right, the vocation came to me when I was on sick leave because she was born. She suddenly had time to create. I must admit that, in this sense, Swedish women are privileged because the government provides us with aid to be able to do so. Long live what's left of the Swedish welfare system!

What was the most boring thing about being a lawyer and in what way has it helped you to write crime novels?

The worst of the worst, what I disliked the most, was sitting in court, listening to the male judges talk about the female victims.

I had to bite my tongue

What remedy! From the outset you are already below them, physically according to the protocol distribution and psychologically because you cannot say what you think. You have a man in front of you who, by hierarchy, you can never contradict… But even when you're in the shit, literature gives you a pat on the back and says: “well, you can take advantage of that, write it down”.

Are the women of Kiruna, your birthplace, very strong in the face of adversity? Because in their books they are more than them...

I think that all women, in general, are better equipped to face the difficulty. To the harshness of life. And, on top of that, we live longer…Perhaps because of the ability we have to weave relationships.

Why is it still hard for us to accept that scenes of great cruelty, murders, are written by women? When, for example, Frankenstein was written by a woman…

That's very interesting because two things happen. If you go too far from the cruel scene they recriminate you (“what kind of woman is this!”) but if you fall short then they consider you a coward, they let you go: “ah! Sure, you don't dare."

Have you ever censored yourself because you thought a scene was too strong? In it they find a corpse in the freezer after decades...

Not because this is carried by the genre: brutal murders, crime novels. But it is true that I am clear not to exploit my characters. You must treat the people you write about with respect, you cannot mistreat them to extreme limits...

How do you document with forensic pathology issues, for example?

I'm very obsessive about it, I review and review everything I can. You can't afford to fail at this kind of thing.

The title of the book is "The Sins of Our Fathers." Haven't we learned to excuse ourselves?

We inherit the sorrows and weaknesses and difficulties of our parents and grandparents, we drag them along. Sometimes you transfer them to your own children, it is inevitable. It would be necessary to try that, at least, each one eats his own shit. And not the inherited one.

All families have secrets. Is it better not to know?

I think you have to hide certain things from children, while they are young. But then… the Bible sometimes says very wise things: “the truth will set you free”. It is important to talk about your past to get rid of it.

To what extent have religious beliefs been important to you?

Always. Now Sweden is a secular country but I grew up in a Lutheran creed environment. My parents were not very believers, they were ideologically to the left, but everything around us was.

The weight of the community. You were once an active member of the Lutheran community

Yes, but the community where we prayed was very retrograde, it didn't let us think further or read things that they thought were inconvenient. An environment of oppression. On one occasion the priest called me on the phone to reprimand me, and I remember that during the conversation I felt so ashamed that I ended up physically going into a closet. Yes, I rebelled against those people and I didn't want to know anything about faith. Years later I reconciled myself, found my own faith, but, at the beginning of my literary career, in my books, I killed quite a few priests, true.

Do you find the Bible inspiring?

Yes, I like to read it still today. It's crazy, something weird, very brutal, very explosive... and deep down it deals with the psyche of people. I'm lovin 'it.

Has any reader excited you?

In recent years, with my children's literature, parents of children with special needs have approached me to tell me: “thank you, my son had never read and with your book he has fully immersed himself in his universe. He has swallowed it whole.” There is nothing, nothing, that can beat that.

Has “the sins of our fathers” kept you up at night?

Ever. I am very disorganized. And this book was difficult, sometimes it got out of hand... like a cake in the oven that doesn't stop growing.