They repeated Gorillaz with their unappealable show, which we reported in detail on their debut at the festival last weekend. 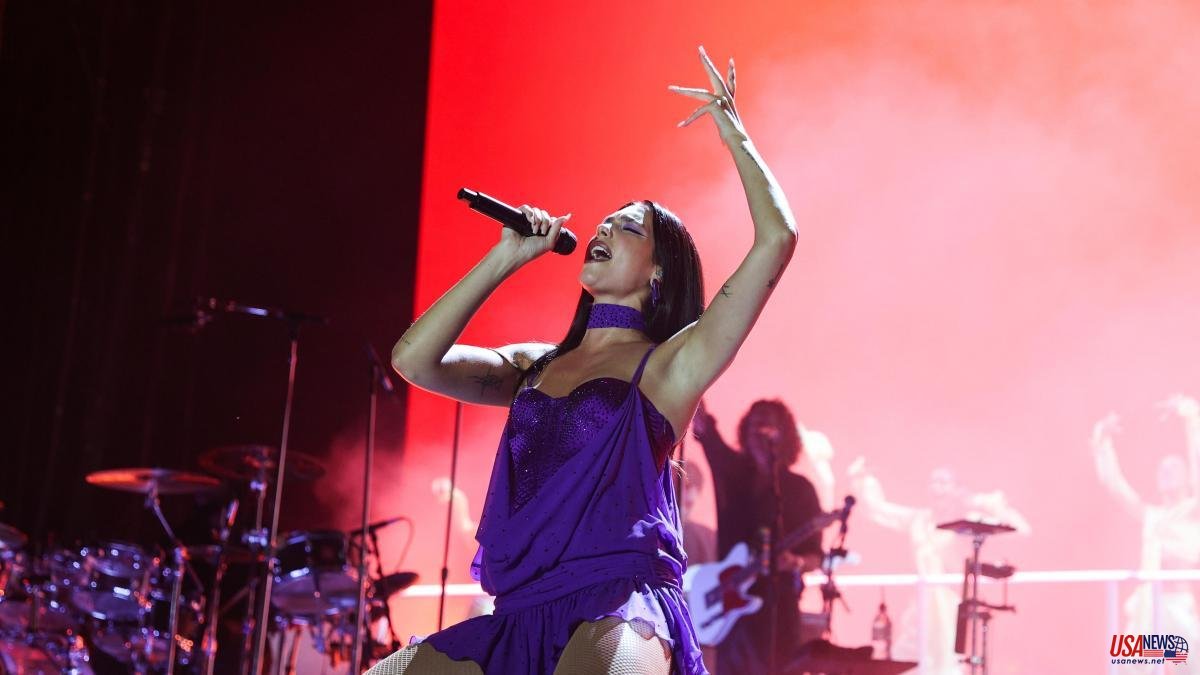 They repeated Gorillaz with their unappealable show, which we reported in detail on their debut at the festival last weekend. But the big headliner on Thursday night was the British Dua Lipa who arrived at the festival, with her The Future Nostalgia Tour, after triumphing at the Palau Sant Jordi. In his multitudinous performance, neither the attack of the giant lobster, nor the millimetric choreographies of his populous dance group, nor the version of Elton John's Cold heart –which appears on the screens–, nor his well-known hits Levitating or Don' t start now, culmination of his string of full tracks with an unmistakable hi-NRG disco-house flavour.

The pandemic has greatly delayed the presentation of her acclaimed album Future nostalgia, which dates from 2020, but the wait has been worth it, since, as the chorus of the song that gives it its title says, this singer, songwriter, model and actress of Kosovar Albanian origin is a true “alpha woman”.

The presence of the group Big Thief, in the night slot of Primavera Sound, was one of the most anticipated indie performances on the first day of the last weekend of the festival. The Brooklyn, New York-based quartet, led by singer/guitarist Adrianne Lencker, has released five albums, the latest of which is the torrential double Dragon new warm mountain I believe in you. With unbeatable reviews, his music, halfway between rock and folk, ranges from country and rustic aromas to the most forceful forms, ranging from diaphanous melodies to turgid passages dominated by electric guitars.

The first song Masterpiece lived up to its title, mixing rueful rock and humming melody. The rock tension continued with Black diamonds, in a successful swing of crescendos and slowdowns. Lencker's powerful voice was planted in the sorrowful and dramatic Shoulders. Halfway through the concert they switched to acoustic guitars to offer the country-folk aromas of Certainty and a solo song of hers, Not a lot, just forever, in a folk-rock key.

Back to the electric tension they raised the octane with Flower of blood and Not, full of distortion and feedback that galvanized the audience. They only played ten songs in fifty minutes, but it was more than enough to make it clear that they deserve their cult following.

For its part, the British group Metronomy makes the fluctuation of styles its main reason for being. Originally from Bristol and led by singer and guitarist Joe Mount, they came to the festival to premiere their seventh album Small world, whose intimate pop contrasts sharply with the rhythmic exuberance of previous albums. Thus, the effect produced by the initial Love Factory is much less than the impact of the classics The bay or the unappealable The look, the highlight of the concert and which continues to sound resplendent as the first day.

With an elegant set design, based on a translucent screen with vegetables that change color, his concert was a roller coaster, with pronounced dips in recent songs that allude to the pandemic and its overcoming, such as Things will be fine or It's good to be back.

They quickly amend it with immersions in their creative past full of synthetic sounds, such as the emblematic Old skool, leaning completely towards punk-funk, a Salted caramel ice cream with a marked new wave tone a la Talking Heads or a Love letters imbued with the spirit of synth pop. They finish off their work with the rhythmic whirlwind You could heasily have me that mixes the synthetic with a punk spirit.

Rapper Playboi Carti, originally from Atlanta, only has two albums under his belt; the latest, Whole Lotta Red, features Kanye West as executive producer and collaborator. Heavily influenced by the world of fashion – he has even walked for Louis Vuitton – his hip hop is an experimental freestyle, full of electronic bases and with a propensity for the dark. The influence of vampire movies has led him to title his tour with the striking name of King vamp narcissist tour. And his staging was like a descent into hell, with flames, smoke and the only accompaniment of an electric guitarist. As original as it is not suitable for the uninitiated.

After two in the morning, one of those delicatessens that the festival boasts made its appearance on the Plenitude stage. This is the Nigerien Mdou Moctar, Tuareg singer-songwriter and guitarist who has taken desert blues to a new dimension. He came with his group to present the album Afrique victime, which, as the title indicates, denounces the new forms of colonialism. His steely sound follows in the footsteps of Western guitar heroes, but from the perspective of Tamashek culture, that of the blue men of the desert, to whose difficult and Spartan life we ​​must now add the problems arising from the growing jihadist terrorism.