Draghi's ultimatum to his government partners to apply the reforms

There is almost a year left for the next general elections in Italy, but with each passing day Prime Minister Mario Draghi finds it more difficult to keep the motley coalition of parties that support his government compact. 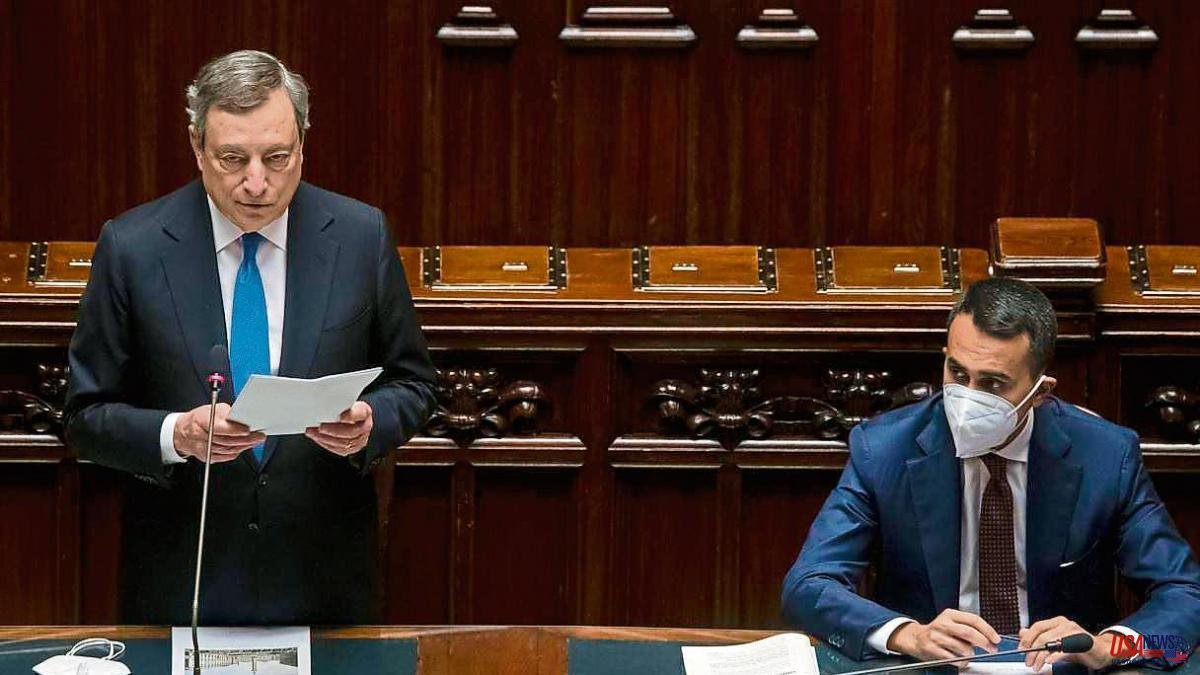 There is almost a year left for the next general elections in Italy, but with each passing day Prime Minister Mario Draghi finds it more difficult to keep the motley coalition of parties that support his government compact. The former president of the European Central Bank is furious at the difficulties he is having getting Parliament to give the green light to a series of reforms and decrees necessary to follow the planned schedule of the European recovery plan.

Exasperated, fed up with the bickering between coalition partners and tired of parliamentarians being slow to follow through on their plans, the Prime Minister's irritation was public last week, when he called a surprise 10-minute Cabinet meeting to give them a ultimatum: either the disputes end and they agree to approve the pending decrees, or they will submit to a confidence vote. Draghi has lost patience. European funds hang by a thread and the former banker was called to govern Italy precisely to safeguard them. The president does not want to fail either before the Italians or before his continental partners.

The measure that has generated the most problems these days is a bill by which the Government wants to put out to tender the licenses to operate beach bars and other establishments on Italian beaches, which traditionally pass from one generation to another in Italian families. The measure, within the competition reform demanded by Europe, was initially approved by the Mario Draghi government months ago, but until now it is still blocked by Parliament. The goal is to increase competition within the Italian product and service markets, which should come into operation this year to complete the requirements of the European Commission.

The Executive intends to put these licenses out to tender – which represent a huge business in a country with 7,500 kilometers of coastline – by 2024, but the League and Forza Italia, two of the parties in the government coalition, were opposed on the grounds that it is It is preferable that the licenses continue within Italian families that do not come under the control of large corporations.

Draghi had warned that either it was approved by the end of May, or the text was submitted to a confidence vote. In the end, the Industry Commission that had retained the text in the Senate reached an agreement in extremis to put it to a vote next Monday, as the premier wants. “Salvini is seriously endangering the maintenance of the government, he is putting European money at risk for Italy. We will not allow Italy to miss this great opportunity, the most important in our recent history, which is to use European money well”, criticized the secretary general of the Democratic Party (PD), Enrico Letta, on Tuesday.

The question of the reform of the competition is only the latest episode in a very long series of disputes that have their origin in the same problem: differentiating between the parties that make up the coalition before the great Italian political event next year. In the Government they have already assumed that after the summer the pre-electoral climate will be so high that it will be very difficult to pass legislation. But there is an even more urgent election, the municipal elections that will be held at the beginning of June in 978 Italian municipalities, including those of the regional capitals of Genoa, Palermo, L'Aquila and Catanzaro.

The Open Polis analyst Luca Dal Poggetto, who monitors the implementation of the projects of the Italian recovery plan, assures that "there is concern" about the progress of the reforms because the municipal electoral campaign is approaching, which "arrive a year before of the end of the legislature and are seen as an important test for the parties”.

“Before June 30, 50% of all the planned reforms must have been carried out. Right now, we're at around 41%, so there is indeed some concern from this point of view,” he reiterates. However, the expert warns of the risk that Draghi exceeds his prerogatives by rushing Parliament, which he considers to "force" its powers.

Another of the parties that is putting Draghi to the test is the 5-Star Movement (M5E), which, seeking to convince a large part of the electorate that is reluctant that the war in Ukraine affects the Italian economy, seeks to distance itself by insisting from weeks ago in opposing the shipment of more weapons. The underlying problem is that its leader, Giuseppe Conte, does not have effective control of the party and could be tempted to withdraw his ministers from the Government to gain popularity, feeling that his requests are constantly ignored by the former ECB president. The Executive could continue governing without the grillini, but it would unleash an obvious political fracture.