Draghi conditions his permanence to the Italian parties accepting his program 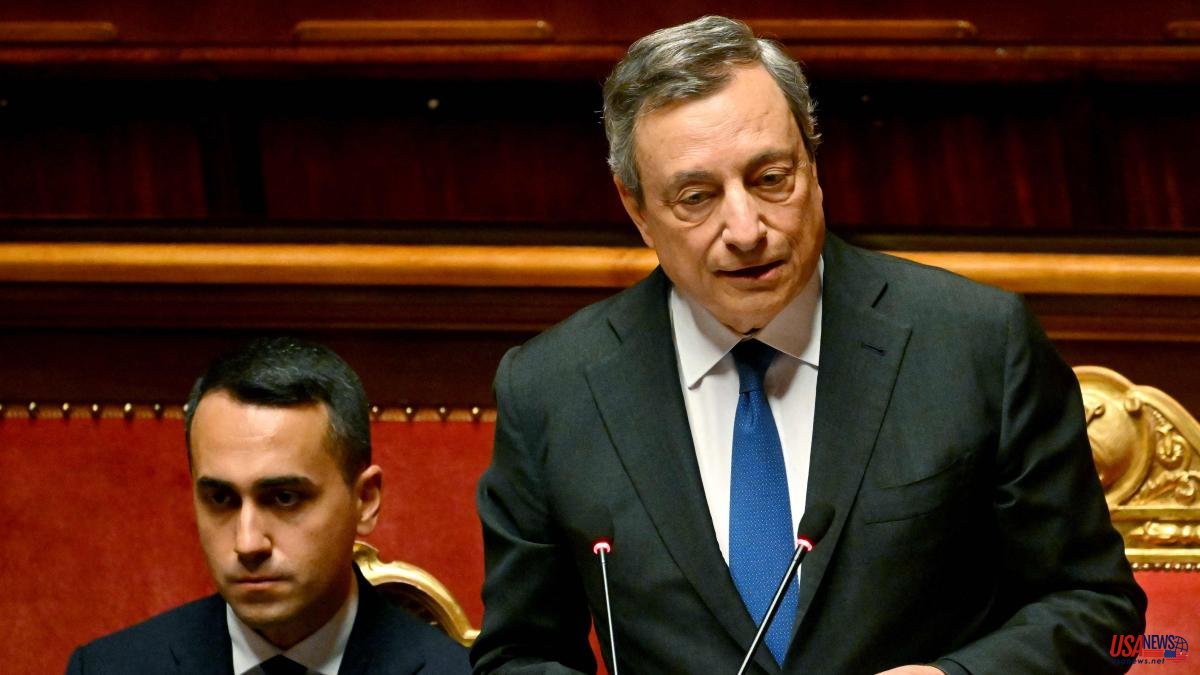 Mario Draghi had two options this morning. Or ratify his resignation, presented last Thursday before President Sergio Mattarella, and leave. Or expose the conditions for him to continue as Italian Prime Minister. He has opted for the second and has proposed rebuilding the investiture pact from scratch, with "courage, altruism and credibility". “The Italians ask for it above all”, he said, thanking the mobilization these days of mayors and associations of all kinds, from doctors to universities.

But it will not be easy. Draghi, tougher than ever in his speech before the Senate – he had to speak in the Upper House because this is where his Executive was born – has outlined a detailed program to follow, from completing the recovery plan to the reform program that has begun, to an international agenda based on support for Ukraine –sending more weapons–, to European and NATO values. On this occasion it was he who has given an ultimatum to the parliamentarians: either they accept it, or the Executive falls definitively.

“Italy does not need a façade of confidence that fades at every uncomfortable move. It needs a new sincere and concrete trust pact. Parties, parliamentarians, are you prepared to rebuild this pact? ”, He has asked them.

Now there are several hours of parliamentary debate until a confidence motion is voted on late in the afternoon. It will be then that Italy will know if Draghi's proposal satisfies the 5 Star Movement (M5E), the architect of the crisis by distancing himself from a key vote last week. There were long faces in the ranks of the grillini, who have heard how he wants to send more weapons to Kyiv and also improve his citizenship income, the star measure of Giuseppe Conte's first government.

But the League of Matteo Salvini, the other party that in recent times has put the prime minister in difficulties, will not have liked it at all. For example, he has attacked the position of the extreme right on the construction of a regasification plant in Piombino, necessary for the road to energy autonomy, but to which the local party is opposed. Salvini has immediately withdrawn to deliberate with the leadership of his party and is in contact with Silvio Berlusconi, leader of Forza Italia, with whom he has decided to act jointly.

In his long speech Draghi has exposed the achievements of his Executive, extolling the "merit" of the parliamentarians during the honeymoon phase. But he has also detailed the reasons that led him to present his resignation, last Thursday, after the M5E's rudeness to a vote of confidence linked to a complicated decree of aid against inflation. A "clear gesture" that he could not ignore, in his opinion, because "it comes after months of blows and ultimatums."

The enormous pressure he has received these days has made him change his mind. He has been called by all the major Western foreign ministries begging him to continue, including Ukrainian President Volodymyr Zelensky. He has also convinced him of the "citizen mobilizations these days that are unprecedented and impossible to ignore."

“We are here, today, at this point in the discussion, because and only because the Italians have asked for it. This answer to these questions should not be given to me, but to all Italians”, he settled. The decision now rests with the Italian parties.