Don't you dare read on Halloween, these books are only for the brave

"In the dawn of time, bloodthirsty creatures walked the Earth. 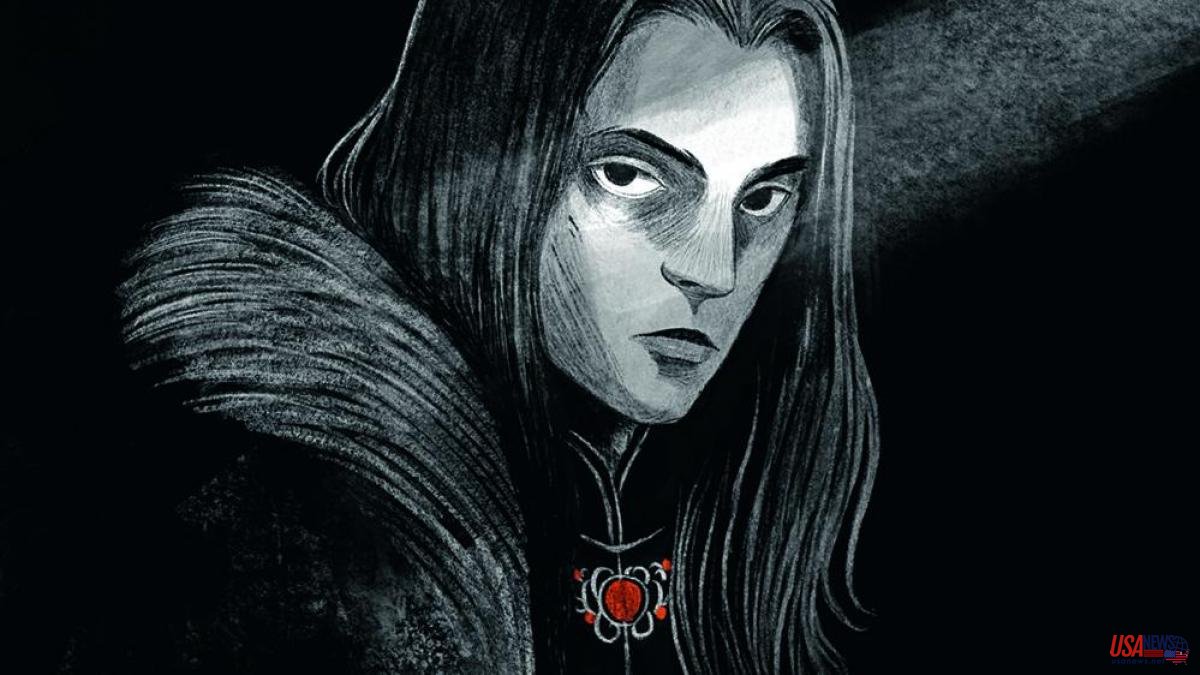 "In the dawn of time, bloodthirsty creatures walked the Earth. Shadowy figures, belonging to the darkness, who represented our worst fears. But over the centuries this changed, and today they are an icon of seduction."

This is how the Errata Naturae editorial summarizes the attraction that since time immemorial man has felt towards darkness, death, the creatures of the night... At the gates of All Saints, which in our country has already become a hodgepodge of traditions where Halloween, the Day of the Dead or All Souls' Night also have a place, we also find the perfect setting to approach horror literature. The nights are getting more chilling every day, so a little more dressing will not hurt anyone.

We start this selection with this proposal from Errata Naturae from which we extracted the quote, a reading for all audiences although we recommend it especially to young audiences because it is an excellent work in white, black and blood red, which allows us to delve into the vampiric figure throughout all time.

The Secrets of the Vampires, by Julie Légère and Elsa Whyte, illustrated by the Valencian Laura Pérez, starts in ancient times, with Lamia, Sekhmet or Lamashtu as protagonists, and runs through the Middle Ages (what a crucial role the Inquisition played in creating myths) , the Renaissance and, above all, the 17th century with the splendor of a multifaceted vampirism. Vampires and vampires of all times and from all countries circulate here, but also in all formats, with a special predilection for literary and cinematographic.

Also for young audiences (from 13-14 years old) Manuel Jesús Zamora, from Malaga, publishes his first novel, Luces custodias (Toromínico), in which he continues to explore the genre of terror and the supernatural, which left us with so many goosebumps with the book of stories Four horror stories and an abominable story.

This time the story unfolds on two levels, that of natural humans and that of the supernatural plagued by monsters, wizards, nymphs, werewolves and other sinister characters. The protection of one over the other is carried out by the Guardian Lights, characters with varied powers and abilities that must face something unknown until now. But a young music teacher, Miguel Nímel, who teaches at a convent school, changes the rules of the game.

Like any good fantasy novel, landing in a new world is complicated, so Zamora provides an annex at the end of the book with the drawing and characteristics of the main characters, which is much appreciated.

More committed to terror is Stephen King, master of the genre, whose title Lunch at the Gotham café (for all audiences), originally appeared in the 1995 anthology Dark Love, is now recovering Nórdica Libros illustrated by Javier Olivares and fresh from the oven to taste these days.

With drawings in the purest comic style by Olivares, King retells this gruesome story of Steve Davis, abandoned by his wife and by tobacco, who makes an appointment with his ex's lawyer to file for divorce, without even thinking that a restaurant can become Tobe Hooper's House of Horrors.

Nor is it far behind, although with a very different style, Matthew J. Gilbert, author of the unpublished stories that emerged from the popular Netflix series Stranger Things, brought together under the title Horrors of Hawkins (Great Journey). This collection of stories is set between Seasons 3 and 4 and kicks off when Dustin, Max, Lucas and the gang reunite at Family Video during a city blackout, only to have scary stories when their movie night is ruined. cursed dice, ghosts and monsters in the lake are some of the pearls that are told here.

The Edebé publishing house starts this Halloween a series for kids from 10 years of age of Kory Merrit that you laugh at everything mentioned above. No Place for Monsters is set in a residential neighborhood, Cowslip Grove, which is not as quiet as it seems. In the first introductory installment, the protagonists Levi and Kat (they couldn't be more different, she all earthquake and lover of the paranormal and he more modest and calm) must unravel some grisly disappearances. Children, including Levi's sister, who vanish in the middle of the night and whose existence is left behind. Not even in the minds of her parents. Levi and Kat are the exception, and of course the creepy Rafer Frost.

From France comes La abracadabrante enciclopedia de brujos y sorcerers (Anaya), signed by Bernard Villiot and with hilarious illustrations by Adilson Farias, which are priceless. They put themselves at the service of this story that begins with the letter of a princess in love with a toad, to which the Archmagic and Witchcraft Syndicate provides a catalog so that she can decide who her beloved will become.

There is Mortmentor, Brujoroba, Tartarina (who eats children's brains on Christmas Eve), Master Sagoo, Hadia or Filiberto. To get to know them better, we learn about the powers of their magic wands, some of their secret potions and their most used malefic herbs (from 7-8 years old. Also in Catalan)

By the way, Anaya also gives us an exciting and fun vampire story (a little scary, yes, but not much) starring Leo, who is about to turn 111 in The Vampire Commandments (from 10 years old) . A vampire hunting initiation novel by Alex Foulkes, illustrated in ink by Sara Ogilvie.

The creativity of the French illustrator Benjamin Lacombe is put at the service of a very special book that is part of the collection The Encyclopedia of Magical Beings that is being produced by the Edelvives publishing house and its Catalan counterpart, Baula. It is The Witches (from 10 years), a large-format hardcover book written by Cecile Roumeguière, which travels between the imaginary and the real to bring us closer to the witches of all times, places and traditions in the world: from Lilith to the Witches of Salem, through Joan of Arc, Baba Iagà, Mama Shiptom or Ketherina Hetzeldorer. A tour led by little Lana to introduce us to wise women, many of whom are stigmatized, and their role in mythology, tales or history. A fantastic read for Halloween.

In the horror genre there is also room for the game. It is the one offered by Jacobo Feijóo and Martín Rodríguez, authors of the collection starring the Kronos Agency (Anima Llibres) in Missió Transilvània, the sixth title of the series that has been dedicated to all kinds of terrifying beings, starting with Count Dracula , responsible for the kidnapping of one of the protagonists.

By the way, the same publisher has started a new series of vampires with the same authors for brave people from 9 years old, baptized with the suggestive name of Fangs, and starring a vampire influencer, whose pet is Chong Duy, a Vietnamese pig. !Almost nothing! We will have to see how this bizarre character evolves after this presentation installment.

Another series, this time for children (6-7 years old) also kicks off this Halloween in La galera by the Finnish author Magdalena Hai. It is about The Little Shop of Nightmares, a dark place where Nina, a 9-year-old girl, goes looking for work. Yes, as is. She wants to buy a bike but she has no money, so she decides to go see Mr. Kook, who is the only person who needs a helper, although the cleaning is already done by Paddy, a greenish ghost with a friendly face. But horror, Mr. Paddy has a fit of laughter and you have to find the antidote before asking him for a job. An ideal series for early readers who enjoy the subject, very aptly illustrated by Teemu Juhani.

After the success of A monstrous dinner, the duo Meritxell Martí-Xavier Salomó offer us A monstrous gift (Flamboyant, also in Catalan), where they return to the theme coinciding with Halloween and organize a party for their cast of horrific monsters to celebrate the World Fear Night. They have invited everyone and have made sure to celebrate the party in a well hidden place to avoid that the boy does not appear, as he did during dinner, and ruin everything.

As it is about opening gifts, the flaps hide page after page a number of gifts, each one darker. Until the last one arrives, a little one, who hides a great treasure (from 5-6 years).

And so that the little ones (3-4 years old) begin to get a taste for the paranormal, Flavia Z. Drago entertains us with Gustavo, the shy ghost (Edelvives/Baula), a story about, as the title says, a shy ghost who finds it hard to make friends. The story doesn't have much else but the illustrations open up endless possibilities and invite you to enter another world.

And for possibilities that it also opens up for the little ones (3-4 years old) The Haunted House (SM/Cruïlla), a pop-up adventure by Joel Stern, illustrated by Christopher Lee. Green-faced witches, ghosts and mummies, goblins and the occasional unidentified bug live in this house. Can you imagine knocking on their door on Halloween night?