Djokovic, to the London final despite playing in the opposite field

Geez, Center Court is an oven, the parish fans and Novak Djokovic (35) plays in the opposite field. 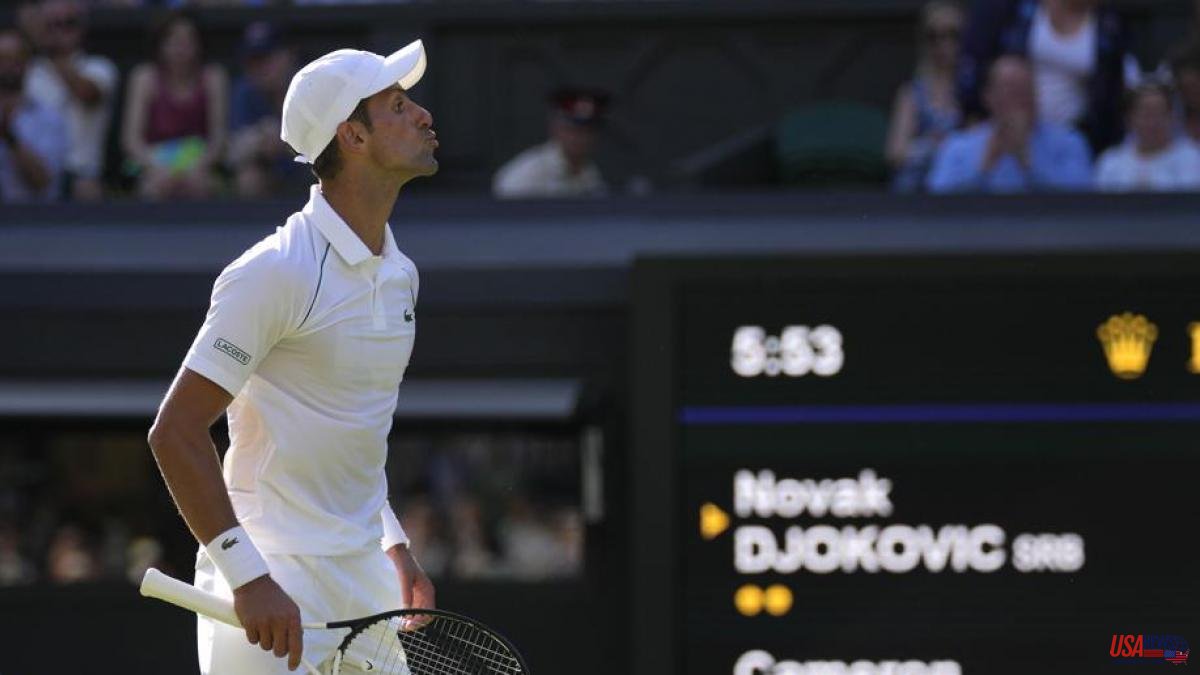 Geez, Center Court is an oven, the parish fans and Novak Djokovic (35) plays in the opposite field.

Djokovic wants to be loved, he strives to satisfy the Wimbledonians.

In Aorangi Park, on the eve, he offers to sign autographs and poses like a father with his son Stefan –when he hits backhand, little Stefan, the creature is seven years old, looks like his father–. If necessary, Djokovic kneels and chews the Wimbledon grass while he greets the crowd (it's hard to imagine Nadal or Federer in that pose).

But what bad luck!

In his semifinal in the oven of the Center Court, Djokovic must face Cameron Norrie (26), a local hero, so fair are the British today (the feats of Andy Murray, double champion here, are already beginning to be seen far in time, in 2013 and 2016).

The cathedral of tennis is a furnace and the crowd goes wild at 27 minutes when Norrie breaks Djokovic's serve for the third time to win the first set.

Norrie is a left-handed demon who executes a strange shoulder roll when he drives and Djokovic can't see well, the mid-afternoon sun bothers him, so he puts on his cap, opens a monologue with himself and looks for himself.

-Novak is Novak. And he plays better when the public is against him. He is an alien, and I don't know how to defeat an alien,” David Goffin, Norrie's latest victim, said on Wednesday.

(he had been asked about the British's options)

And it is true: Djokovic is driving in the opposite field. He does it at Wimbledon (Federer territory) as he does it at Roland Garros (Nadal territory); in this carousel of tennis passions, nobody belongs to Djokovic.

We are Nadal's, we are Federer's.

Norrie goes fast, he doesn't want the Serb to think.

When serving, Norrie spends ten seconds between one point and the next. One or two hits and at the net. It proposes vertigo, this looks like a horse race at the racetrack. Djokovic tempers him, takes the game to his field.

He knows how to do it.

He has already played 32 Grand Slam finals (he adds twenty titles, six of them at Wimbledon), exactly 32 finals more than Norrie, the 12th tennis player in the world, a newcomer in these competitions.

Djokovic tempers and redirects the situation, opposes calm and long rallies to Norrie's vertigo, and the British's effectiveness begins to fade.

An unforced error happens to a magnificent blow: Norrie is a good tennis player, not a legend at all, and his interruptus weigh him down, nothing to do with the stability of the Serbian. Djokovic usually starts at half throttle, contemplates his opponent and the environment, grants him a few minutes of grace and then bursts.

At one point, Djokovic appropriated the second set and also the third: while Norrie's number of unforced errors skyrocketed (fourteen in the second set, compared to nine in the first), the Serbian's dropped, now hitting in 78% of his first serves and transfigures into a monster.

Djokovic does nothing extraordinarily well, and yet he weaves a subtle web that surrounds Norrie, a fly trapped between the threads.

Djokovic is silencing Norrie and also the parish, which understands his fate and assumes it and resigns himself:

I haven't started well. She felt the pressure. I guess Norrie has also been able to feel it -says Djokovic when everything is over and the interviewer blesses him:

–With this, you add 68 appearances in a Grand Slam tournament. In that time, he has already reached 32 finals (more than anyone ever). What does that tell you?

– That the work is not done.

The commentator cites Nick Kyrgios, the last stop in Djokovic's career, and the public boo the bad boy.

Perhaps, smiles Djokovic, all is not lost.

Perhaps this Sunday the parish will be on your side.

-In Australia, Kyrgios was one of the few who publicly supported me. I'm really grateful to you. But everything that happened in Australia was already a long time ago. It's been six months,” he says.

-Your experience in this type of matches benefits you, don't you think?

-Perhaps. But Kyrgios could also benefit from the fact that nothing is at stake and he will move with the pressure that I will have.

– And are you surprised to see him in a final, given his career?

-Perhaps his past raises doubts. However, among tennis players we know how dangerous it is, especially on grass. He is a very complete player who has found mental balance. And as a fan, I am happy to have him in tennis, he is very talented and can offer us very good moments.