Digital art to understand the pandemic

The screen shows some animated spirals. 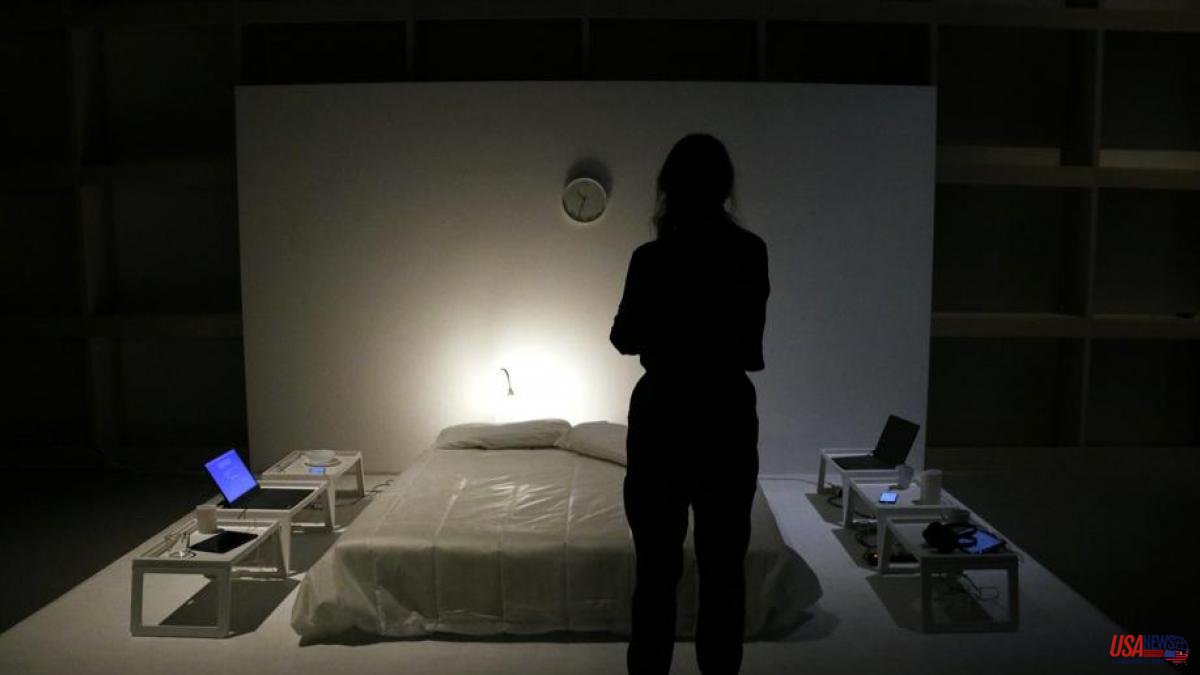 The screen shows some animated spirals. They are the result of the combination of molecular models of covid and structures of human and non-human proteins, such as antibodies or cell receptors. The result is some unexpected images with which the artist Laura Splan wants to show that "being human in a natural world is increasingly complex".

A few steps ahead there is a curtain. Opening it, you enter a dark room. On its four black walls there are tweets in white letters in all languages. They are about the coronavirus pandemic. A script transforms the characters of those messages into musical notes. It is Piano Concerto and Pandemic, an immersive and sonorous work by Nikolas Gomes.

Rosell Meseguer has taken years to write his dictionary of chemical elements. He has started from the periodic table of all life and has recomposed it so that its use in everyday life is understood. Her work, Rare Earths, is complemented by the classic accounting books in which the artist has painted with the colors of the Earth and a video on mining in southern Europe and America that shows how mineral extraction affects the planet.

They are three of the 32 works of digital art that are part of the La irrupció exhibition, the exhibition that the Santa Mònica arts center exhibits from yesterday until August 21 “to visualize the pandemic and also other crises such as climate, because the common denominator is this moment of collapse in which an excision is created, which could be seen as a rupture, but we have preferred to speak of irruption”, explained yesterday one of the curators of the exhibition, Enric Puig.

The Santa Mònica has wanted to offer a multiple reading of this art and has designed seven different routes to go through the exhibition, “there are seven possible narratives that cause a change in the meaning of the pieces depending on the itinerary chosen”.

The irrupció is part of the International Electronic Art Symposium, ISEA2022 Barcelona, ​​an initiative that brings together an extensive sample of pieces in which art, science and technology merge and that also combines the proposals of international and local artists. In addition, it has joined the ISEA2022 La Capella initiative with the exhibition El que és possible i el que no. “These are two exhibitions that feed off each other”, pointed out the artistic director of La Capella, David Armengol, who has opted to “put the possibilities offered by technological advances in a crisis, although in a positive way”.

This is what Mónica Rikic does with Especies, I, II and III , “a work that poses what would happen if Artificial Intelligence replaced humans and that immediately answers that this possibility is not feasible, because Artificial Intelligence lacks conscience, but he asks himself again, what would happen if he had a conscience?” And the answer is three works in which the machines show how your heart can beat.

The Estampa collective, made up of five artists, dissects in Guest Images the captures from the cameras until they are converted into data. It is another of the nine proposals by La Capella for ISEA2022 Barcelona, ​​which can be seen until August 28 at the Hospital Street museum.

In addition, there will be a third exhibition also within the initiative of the International Electronic Art Symposium that will take place at the Sant Pau Modernist Site until June 30, which, with the title Possible , will exhibit works by Thierry Fournier or Monika Fleischmann and Wolfgans Strauss .