Espanyol traveled to Brighton to play their fifth pre-season game, but did not compete on the grass of the Amex Stadium, totally outmatched and ultimately thrashed by the Blue and Whites, this time in pink, by the Seagulls. 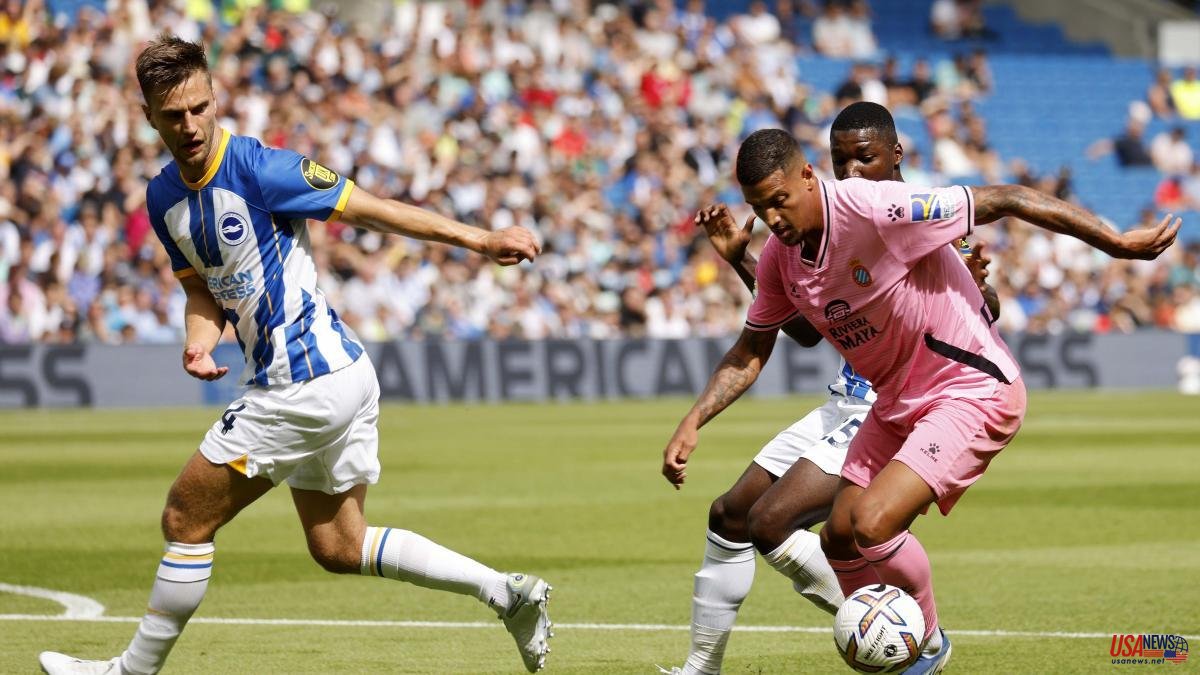 Espanyol traveled to Brighton to play their fifth pre-season game, but did not compete on the grass of the Amex Stadium, totally outmatched and ultimately thrashed by the Blue and Whites, this time in pink, by the Seagulls. The first setback for Diego Martínez's new project, which highlighted the need to reinforce the squad after numerous departures and few signings.

The parakeet group presented an eleven of circumstances due to the absence of the many injured (the last Embarba and Puado) and the discards, in addition to the 'disappeared' Vilhena and Raúl de Tomás, who did not travel to English lands to follow his training plan individual. However, the future of the striker and a possible clash with Diego Martínez, according to RAC1, have rarefied the parakeet's concentration.

“The reality is that there is no firm offer. He is a player who must recover the appropriate form to be able to integrate 100% ”, said the sports director, Domingo Catoira, about the Madrid player, who praised the strength of the group above individualities. A team that took a step back in its preparation against those from the south of England, who did not need Marc Cucurella, with one foot out after requesting the transfer request.

The rhythm of the British knocked out an Espanyol team that barely crossed the midfield line in the first half. The locals hammered the Spanish box relentlessly, but it was on a 17th-minute corner kick that they opened the scoring with a header from Webster, which went past Keidi Bare. Only Vini Souza, desperately going from one side to the other, seemed to match the rival's physical power.

Brighton combined both inside and on the wings, while the Spanish chased shadows and did not follow a game plan, without the ability to successfully retreat or press up. The 1-0 at halftime was the best news for the Blue and Whites, who ended up breaking down after the restart.

If Espanyol had any hope of coming back, it was snatched away by their goalkeeper, Bejamin Lecomte, a statue to Dunk's second goal header. Without football to change the trend, the Barcelona team was overwhelmed in the following minutes by the ninth-placed team last year in the Premier League, especially by Leandro Trossard, author of a hat trick in the next 15 minutes.

The skillful Belgian striker volleyed the third, drove Óscar Gil crazy in the fourth and took advantage of a good pass from Lallana to sign the fifth. For his part, Sergi Darder, who lost the entire match, made a great pass in the 77th minute so that Joselu scored the honorable goal, who had practically disappeared until then.

The puncture against Linense had hardly worried, a pothole resulting from fatigue was the diagnosis, but against Brighton it was clear that Espanyol is still far from competing at the first level. The Blue and Whites have a lot of work to do, both on the pitch and in the offices, when there are only two weeks left before the start of the League.

Incidents: match played at The Amex Stadium before 10,000 spectators.