Death toll from double jihadist attack in Somalia rises to 120

The death toll from the attack with two car bombs perpetrated last Saturday against the Ministry of Education of Somalia in the country's capital, Mogadishu, amounts to at least 120, the Government confirmed on Monday. 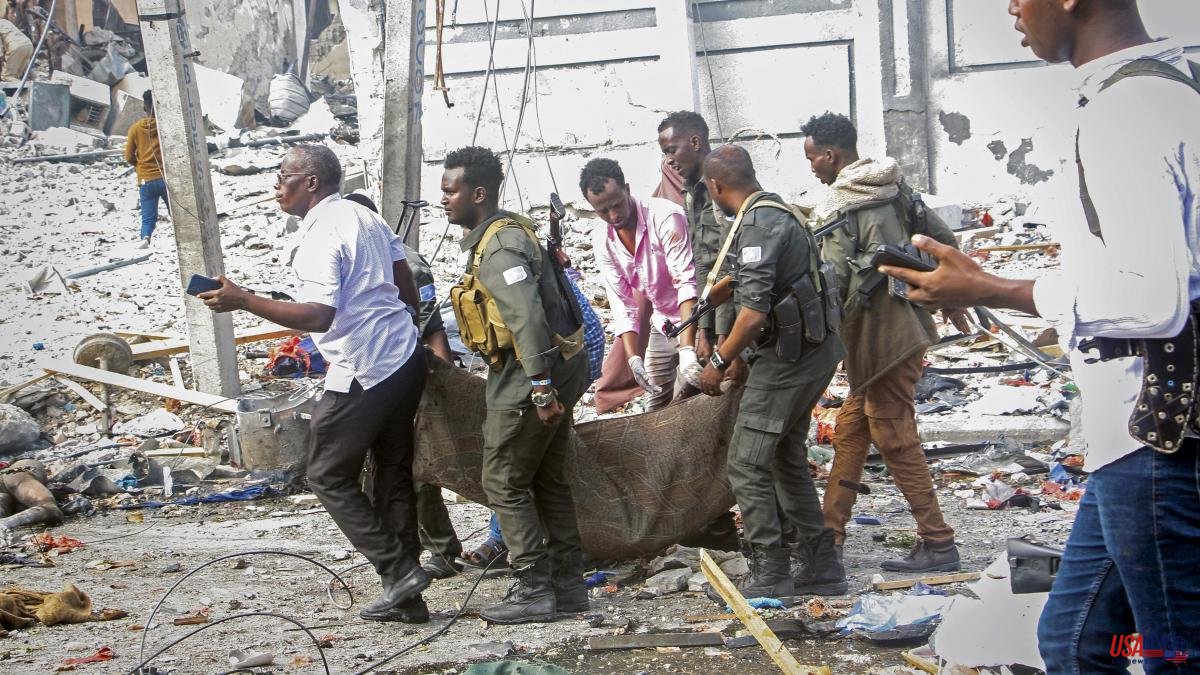 The death toll from the attack with two car bombs perpetrated last Saturday against the Ministry of Education of Somalia in the country's capital, Mogadishu, amounts to at least 120, the Government confirmed on Monday.

"The explosions were huge and left 120 dead and 269 injured. We will help the victims," ​​Somali Health Minister Ali Haji Adan told the media after visiting those affected, after more people died among the 300 announced injuries. yesterday by the authorities.

The attack targeted the Ministry of Education, which is located near the Zobe intersection, also known as K-5 and one of the busiest in Mogadishu.

"Our people who were massacred, including mothers with their children in their arms, parents who suffered from medical conditions, students who were sent to study, businessmen who were fighting for the lives of their families," he said Sunday after visiting the scene of the events. Somali President Hassan Sheikh Mohamud.

In a message posted on his Twitter social network account before going to the scene of the attack, the head of state blamed the "cruel and cowardly terrorist attack" on the jihadist group Al Shabab, affiliated since 2012 with the Al Qaeda terrorist network.

After the attack, a blood donation campaign was organized for the victims in which thousands of people participated, including members of the Government and Mohamud himself.

Among the deceased are a police commander and a well-known Somali journalist, according to police sources cited by local media.

The Zobe intersection was the site of a two-truck bomb attack on October 14, 2017, killing more than 500 people and injuring more than 300 in the worst terror attack in Somalia's history.

The Somali president declared on August 23 a "total war" to "eliminate" Al Shabab, whose terrorists took over a well-known hotel in Mogadishu for thirty hours days before and killed 21 people.

Since then, several US-backed military operations have been carried out against the fundamentalists, which last September killed "more than a hundred members" of the jihadist group, according to the Somali government.

This Saturday's attack occurred when a national meeting was being held between the central government and the presidents of the five federal states of Somalia with the aim of promoting peaceful coexistence and discussing the jihadist threat.

Al Shabab often commits terrorist attacks in Mogadishu and other parts of Somalia to overthrow the central government - backed by the international community - and establish by force a Wahhabi (ultra-conservative) Islamic state.

The jihadist group controls rural areas of central and southern Somalia and also attacks neighboring countries such as Kenya and Ethiopia.

Somalia has lived in a state of war and chaos since 1991, when dictator Mohamed Siad Barre was overthrown, leaving the country without an effective government and in the hands of Islamist militias and warlords.