Díaz begins the process of listening to Sumar to

Yolanda Díaz has raised the curtain on her "listening process" this afternoon, through the Sumar platform, with a large public act in which politics has had little presence. 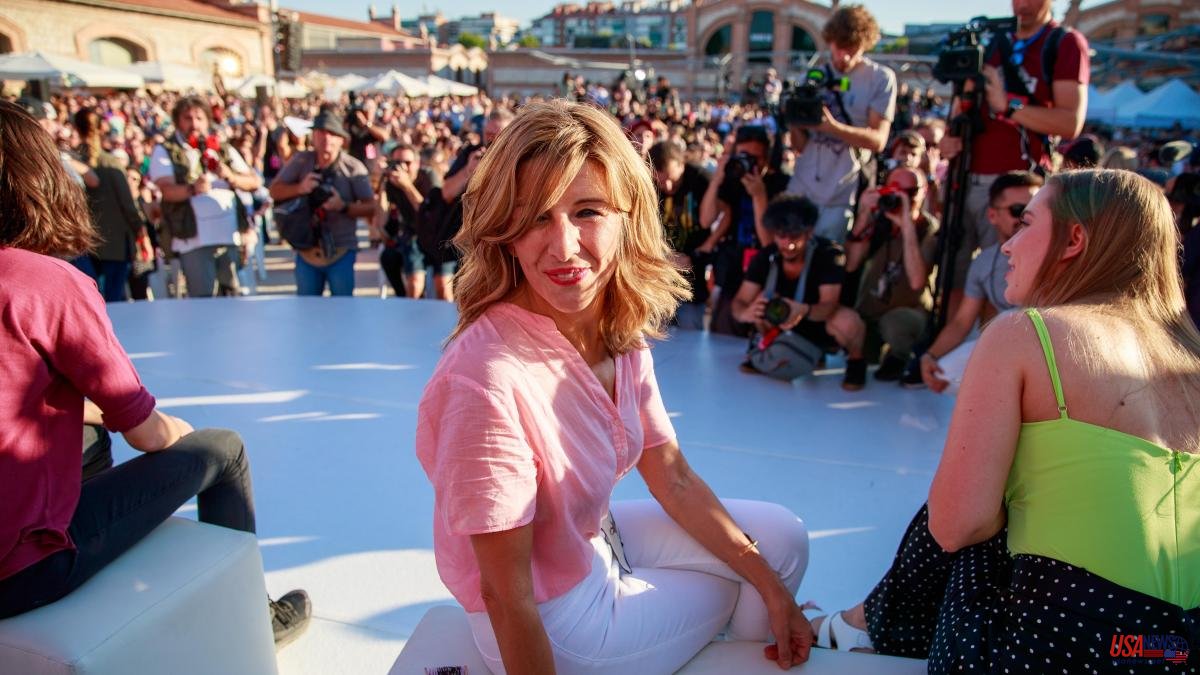 Yolanda Díaz has raised the curtain on her "listening process" this afternoon, through the Sumar platform, with a large public act in which politics has had little presence. At least in terms of names. And so it has been at the express wish of the second vice president, who has personally asked the ministers of United We Can, as well as the political leaders of the different spaces of the left, to await their turn in the near future to give up the leading role of the day civil society today.

With a little more than half an hour late according to the scheduled time, the Minister of Labor has come out dressed in a pink blouse and white pants -two of the colors of the logo- to the stage set up in Matadero (Madrid) to light the fuse of her project . Precisely the same week in which the Government is going through the greatest episode of turbulence in the coalition after the maneuver of the PSOE to sneak an extraordinary increase in military spending behind the back of United We Can.

The horizontal organization of the act, "from the bottom up", has determined the configuration of those who have accompanied Díaz from the stage. Members of civil society, including "public sector workers, new models of the digital economy, activism, associations, trade unions, feminist militancy and riders", among others, have synthesized from their respective prisms the needs and shortcomings that Sumar must contribute to the country.

In front of them, an open-air auditorium filled to bursting, and scorched by the start of the suffocating second wave of heat that is settling in the capital, which has received it with not a few doses of euphoria. It is the "birth of the new hope" some of the sympathizers agreed to point out.

Díaz began with a reminder to the LGTBIQ groups, who are celebrating Pride in Madrid these days after the forced delay so as not to coincide with the NATO summit. And he has given them "thanks" for "having fought so that today we have a better democracy with more rights."

And immediately afterwards he has entered into matter qualifying "the day today as an important day". "I have come to talk to you about the future of Spain, because today a citizen movement is being promoted from within society itself. It is you who are going to join forces to change the country. Because Sumar is not about parties or acronyms, but about collective intelligence, about thinking of a better country and telling ourselves what we want for tomorrow, a country project for the next decade", he chained with hardly any pauses.

The second vice-president prefers to "stay away from the polls" and be guided by all the messages she receives in her native Galicia, in Madrid where she lives, or even in Extremadura where she stepped foot a few days ago: "They tell me these days that I'm slow, that We don't have time. But yes, we have a little over a year to think patiently about the country we want, since we run the risk of losing it if we don't do it right."

Díaz flees from the "single thought" that he wants to impose to bet on "walking together as a society." And based on these premises, "and tons of hope", he promises to tour the entire country with the only condition that the citizens have the leading role as the engine of change. "Together", he underlined, they will end up shaping a "generous and social democratic contract" of working people and young people from which "the hyper-rich cannot become independent".