The Netherlands, the current champion, said goodbye to the European Championship on Saturday, and Damaris Berta Egurrola Wienke (1999) did so with her. 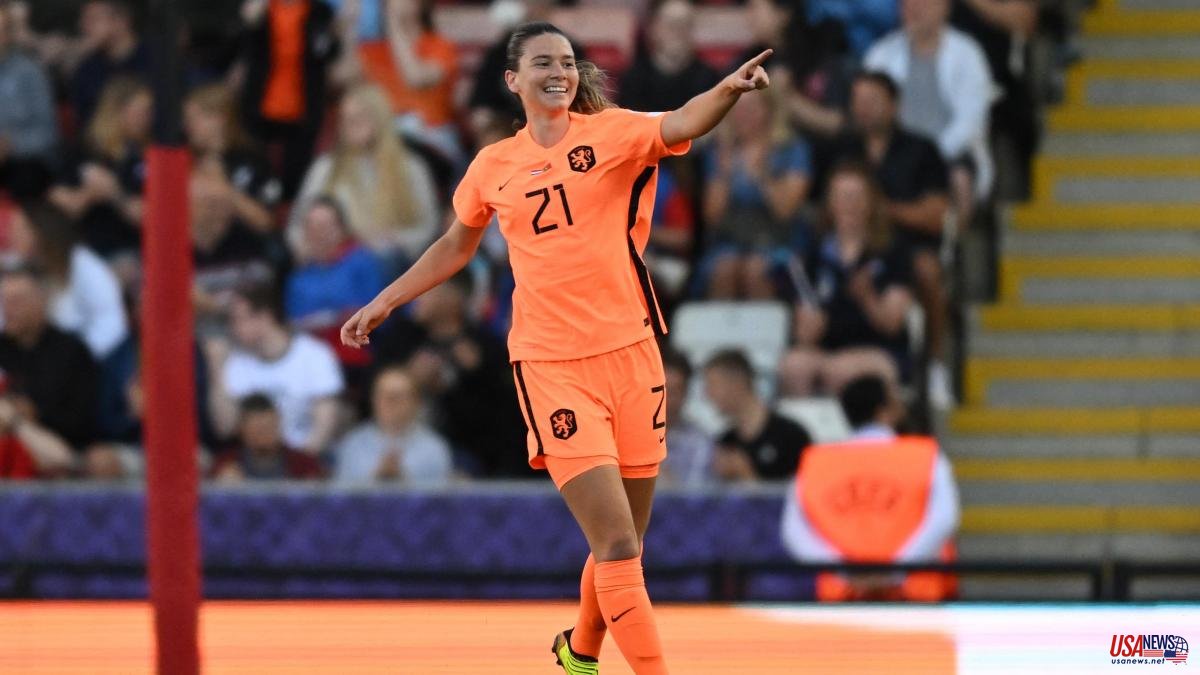 The Netherlands, the current champion, said goodbye to the European Championship on Saturday, and Damaris Berta Egurrola Wienke (1999) did so with her. Daughter of a prestigious Basque pelota player, Osa II, of a Dutch mother and born in Orlando, could have also defended the jersey of Spain or the United States, but chose her mother's country after a rather unpleasant episode with the Spanish coach, Jorge Vilda. "From the first moment they are (the Netherlands) who really loved me", she was honest with La Vanguardia after being eliminated in the quarterfinals against France due to a penalty goal in extra time.

Egurrola was international with Spain in all the lower categories, but when the time came to make the jump to the absolute, it was not in Vilda's plans. He made his debut in 2019 in a friendly with Cameroon, but has not worn the red since then. The Madrid coach even assured the press that he had called the soccer player on several occasions and that she had refused to play for Spain, for which he described her as "not summonable". Information that Egurrola herself would forcefully deny shortly after in an interview in El Confidencial: "Being a coach does not give him the right to lie."

Things of destiny, the fateful injury to Alexia Putellas left a hole in the spinal cord of Spain in which the now player from the Netherlands would have fit perfectly: "Injuries are part of football, but it was very sad news for everyone women's football and for me too, because Alexia is an incredible player and having to leave a tournament like that is very sad. But I am happy to be here and I have never liked to think about what would have happened if she had been there. I am a person who lives in her moment”, she explains to this newspaper, to which she also confesses her predilection for the current Ballon d’Or: “Years ago I looked at her a lot when I went to see her in Lezama. At that time she was extreme and her left foot, her magic… she was someone who really attracted attention. I'm also left-handed, so I saw myself reflected in her."

So far, things are not going badly with the Netherlands. Despite being eliminated in the quarterfinals due to a French penalty goal in extra time, on a personal level the balance is more than positive. She made her debut as a starter against Portugal, due to Miedema being out due to covid, and she did so by scoring and being named MVP of the match.

Against Switzerland and France, his presence was testimonial in minutes, but contributing impudence and imbalance in the Oranje attack. "I made my debut in April and I was able to participate in the 'Euro'. It's part of the process that I'm starting little by little, it's my first big tournament and I really wanted to, that's why I made the decision to come here, to play games like these. Now I already have that experience and I want to be important in this team. It is the beginning of something great”, he predicts.

And it is that for the footballer of Basque descent, the future of the Dutch team is promising: “As current champions, going home like this is hard, but we have to keep in mind that we have a lot of very good people, a lot of young talent too, and we have very good years left in front".

The Spanish team is not the only thing that this footballer who had to leave the First Iberdrola two years ago due to the abusive compensation clauses that were established in the Spanish league has had to give up. Until then, Egurrola had trained at Athletic Club, but with his quality and projection, she was ready to take the next step. Barcelona was interested in taking over the midfielder, but her clause was 250,000 euros. An exorbitant figure if we take into account that the most expensive signing in the history of women's football is still the 350,000 euros that Chelsea paid for the Danish Pernille Harder in 2020.

Frustrated his signing for the Barça club, he ended up at Everton, but four months after joining the English club, he received an irresistible offer from Olympique de Lyon. The French giant, absolute dominator in the last decade, paid a transfer of 100,000 euros for her, making her the most expensive Spanish signing in history, doubling the 50,000 that Barcelona paid for Mapi León to Atlético de Madrid in 2017.

Today, the clause is no longer a problem for Egurrola, since he has already spent two seasons outside of Spain and this would be annulled. With Alexia out of the pitch for nearly a year, it could be an option to reinforce Barcelona. Although it is unlikely for now, since he has a contract in force until 2024, Egurrola is open to anything: “Anyone would like to go to Barça. I had that option in the past, but the compensation clauses meant that a lot of people had to go abroad and it's something that hasn't changed yet. I do not close doors to anything, but I am very happy where I am. I have amazing teammates at Lyon, we've won a lot this season, I want to succeed there and then we'll see."