The function ends and Antonio Banderas receives a standing ovation. 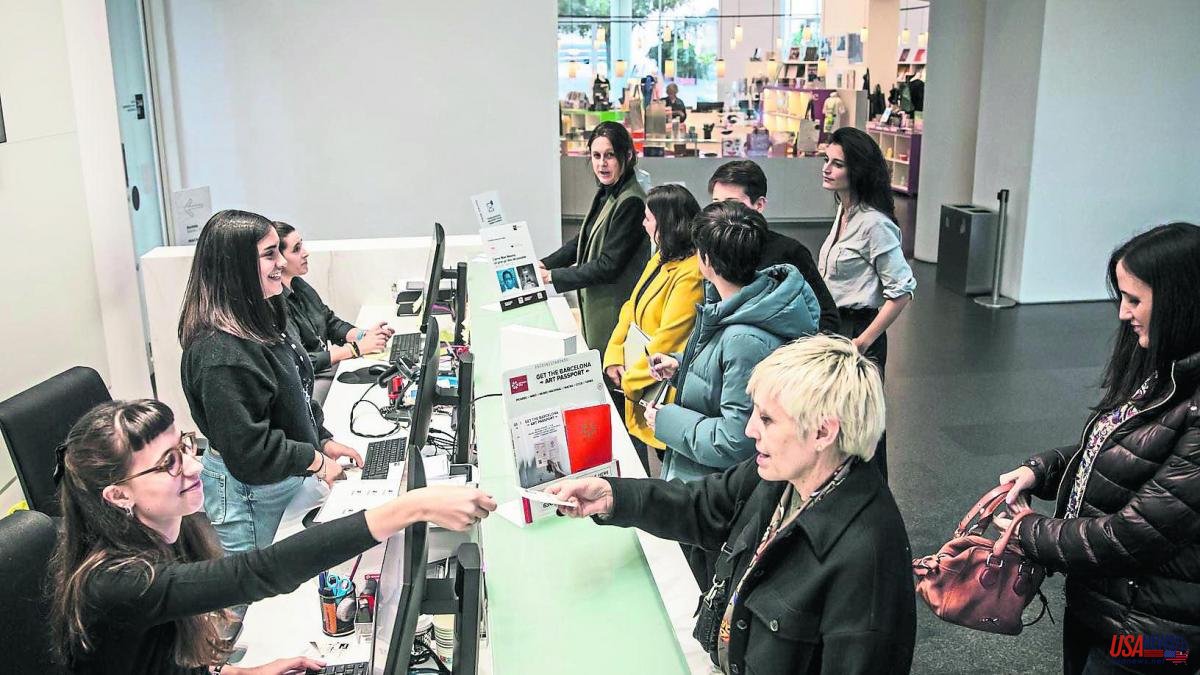 The function ends and Antonio Banderas receives a standing ovation. He premieres the musical Company at the Teatro del Soho that he has founded in Malaga and the success is thunderous. But... so have the costs and supply problems, which have skyrocketed. So much so that the actor, in an impromptu speech, ends up speaking with humor that to lift the show they have even survived "the schism of the Korean chips." He is referring to the immense difficulties in getting microchips to make the revolving stage work. And the costs of everything they had to purchase and transport have skyrocketed. It is November 2021. The war in Ukraine has yet to worsen the bottlenecks caused by the pandemic or send energy prices soaring.

September 2022. The Museo del Prado declares void the tenders to transport two of its future important exhibitions: the great exhibition on Guido Reni and the one on the works of the New York Frick collection. The transport of Reni's works goes out to tender for no less than 865,000 euros. And no one shows up. It had never happened. Finally they will have to reopen the tender but this time for one million euros, the budget that many museums of a reasonable size have to program an entire year. And only in transport. "Three years ago it would have cost a third," says Miguel Falomir, director of the Prado, who recalls that "every three or four weeks the previous budget became obsolete, something that had never happened to us."

The Museu Picasso in Barcelona has also suffered to move from the Pompidou Center the works that are part of the exhibition dedicated to the art dealer Daniel-Henry Kahnweiler. No company appeared in a first tender in which 212,000 euros had been budgeted, so they had to make a second one, raising it by 19% to reach 253,000 euros.

Transportation today can cost in cases like Reni's as doing an entire exhibition before. So, says Falomir, non-essential works found in places like the West Coast of the US or Australia are now discarded. And it's not just transportation: the Prado's electricity budget, he continues, has gone from three million this year to almost six next year. Museums, unlike other institutions, cannot save on electricity: the works have to be in certain temperature conditions and especially humidity, the thermostat cannot be lowered and almost the same amount is spent during the day as at night with the closed doors.

Falomir explains that in order to deal with cost overruns at the Prado, they are carrying out internal cuts that are imperceptible to the public and elements from previous assemblies are recycled, "which is also good for sustainability", although, he warns, if these price increases continue in exhibitions will have to "rethink the size and cost of shows." In fact, he acknowledges, it's already happening. Museums that ask them to borrow paintings now cancel their requests more frequently and openly explain their reasons: "For economic reasons we must resize the exhibition and we are not going to count on yours."

The escalation in fuel prices and the production and transport bottlenecks that have been dragging on since the pandemic are affecting the entire cultural sector, each with its specific characteristics, forcing them to cut back and make more or less imperceptible changes, forcing projects to be postponed and showing, with exceptions, the difficulty of transferring these increases in expenses to prices for now.

One of the few sectors that will be able to do so will be the world of concerts and festivals. Tito Ramoneda, founder of the promoter The Project, says that this year has been difficult for them because they have held paid concerts at 2020 prices, canceled by the pandemic, with 2022 costs. And if on the one hand they suffer from cost increases from the rest of the sectors, in electrical energy – in the Porta Ferrada festival that they program, 70% more expensive this summer -, in temporary personnel – during the pandemic many people who worked in these sectors, such as stage setters, “ they have sought their lives in other sectors and have not returned”–, in light and sound equipment and even in sleeper buses for the teams to sleep on tours – which some, he says, have had to go to Germany to look for this summer due to the enormous demand–, adds to the large increases in caches of artists due to competition and the moment of “euphoria” in the sector. Which will probably lead them this year to increases in the price of tickets of between 15% and 20%, and even then they will not pass on all the costs they are having.

Those who do not affect them for now are the publishers. In the giant Penguin Random House they explain that from January to October 1, 2022 the increases in the cost of paper have increased between 25% and 58%, printers by 10% -inks have risen more than 15% - and transport 20% for those who print for sustainability in Spain. Even so, they admit, in 90% of their titles there has been no price increase and to achieve this they are taking measures such as changing the hard cover for soft cover.

An independent publisher like Enrique Redel, from Impedimenta, points out that the most specialized, artisanal paper has doubled the price per ton, and has even sometimes disappeared, "paper mills prefer to make another with a better margin." They have had to change the paper without being too noticeable. And, he says, "there are certain types of books that stop being profitable unless you find a way: instead of hardback, paperback; instead of 2,000, 5,000 copies to have a better price." Because, he admits, there is a barrier psychological for the public. "The holy grail is not to touch the price, if it exceeds 22 or 23 euros, things get serious." The prices with which his publishing house began in 2007 are not very different from those of now, he recalls .

Another sector where it is difficult to touch prices is the stage. Particularly the opera. Valentí Oviedo, general director of the Liceu, points out that for them only electricity has gone from 0.8 to 1.5 million euros, to which we must add that inflation is transferred to subcontractors and labor costs. In total this year it can mean two million euros more. So they are working to contain the costs of this exercise and to postpone things that they would like to do in the following ones, but they are not yet announced.

"The institution's prices are already in a slightly contained range and it is not a mechanism that we can use a lot," he points out, and is committed, in addition to cost containment, to achieving more patronage now that the current project of the high school That being said, he adds two things: the first, in which he agrees with other cultural sectors, is that the public is holding up well despite the uncertainty. The second, that the speculation is enormous: for the transfer of the scenery of an opera next year they are getting offers that reduce the costs in two thirds.

Despite the perfect storm in which they find themselves, or precisely because of it, for many agents in the sector it is time to reflect. For the Museu Nacional d'Art de Catalunya, whose budget amounts to 16 million euros, the cost of energy expenditure will take more than what it allocates to exhibitions and activities (2.1 million), while only until the month of October the electric meter already marked 2.2 million.

And that despite having reduced consumption. "We have been working on issues of sustainability and environmental responsibility for ten years and in this time we have reduced consumption by 50%, but even so, spending has doubled in the last year," they point out from the museum, the first in the State to obtain the Social Responsibility certificate and where "100% of the energy we consume comes from renewable sources".

“This is not just a specific problem due to the war in Russia, but we will always have it because resources are finite”, considers the director of the CCCB, Judit Carrera. “This is an opportunity for all of us to promote a reflection on the sustainability of the centers”, she points out. “We have been working on measures to reduce consumption to zero for a long time. There are many examples of positive architecture, buildings that not only consume but also generate energy. And we have to go that way, there is no other”.

Among other projects, the CCCB contemplates the installation of photovoltaic panels that would guarantee 100% self-consumption, but the regulatory framework of the City Council currently only allows 30% as it is a heritage building. “I am confident that we can reach at least 100%. Regulatory frameworks would have to be more flexible, because they are currently not up to the severity of the crisis. Today we can continue pulling the car, but if we do not prepare ourselves, sooner or later it will end up affecting the schedules, that is clear”.

"The blow is being very hard and no one is spared," admits Carles Ribas, assistant director of the Fundació Catalunya La Pedrera. The energy cost in the Gaudí building amounts to 550,000 euros until the end of the year, compared to 173,000 in a still abnormal 2020 and 368,000 euros in 2019. For 2023, an item of one million euros has been budgeted for contingencies . "We don't know what will happen and it is important to put on the high beams and try to anticipate events," adds Ribas, who believes that times demand imagination. Although in his case in a Unesco World Heritage building, the option of plaques is not even conceivable.

The Museu d'Art Contemporani de Barcelona has also seen its energy expenditure double (121%) and they anticipate that by 2023 it will increase to 152%, translated into money of 408,000 euros. At the moment, the Fundació Tàpies has escaped the catastrophe, which has a fixed price contract still in force, so they have not noticed a significant increase and they trust that from 2023, when they have to renegotiate the rates with the company, the increase does not exceed 50%. And something similar has happened at the Fundació Miró in Barcelona, ​​where in 2021 they signed a three-year agreement with their provider so that the increase in electricity costs did not exceed 8% per year.