Emmanuel Macron is a leader who tends to seek maximum media presence, in all situations, a strategy that does not always give him good results. 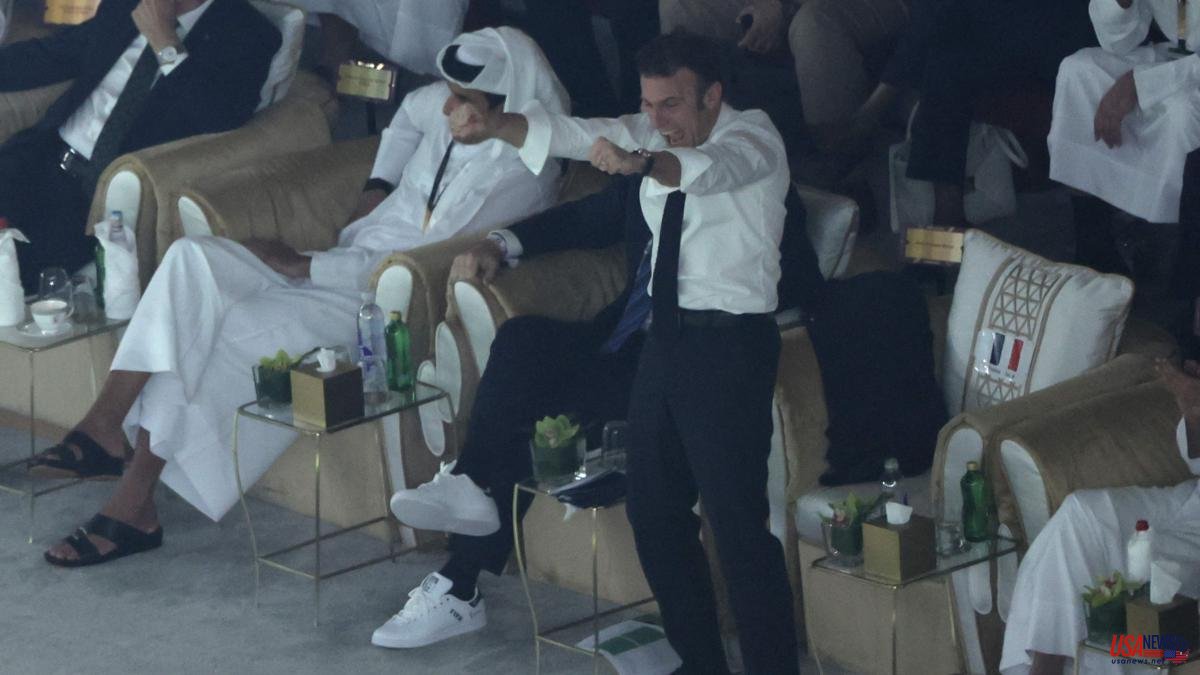 Emmanuel Macron is a leader who tends to seek maximum media presence, in all situations, a strategy that does not always give him good results. His two consecutive trips to Qatar, in less than five days, to attend the semifinal and the final of the World Cup, have generated criticism for the economic and environmental cost, as well as for the excessively leading attitude of the French president, especially with his insistent gestures of consolation to Kylian Mbappé despite the striker's obvious discomfort.

The weekly Le Point entertained itself by calculating the extra expense that Macron's flights have entailed for the State and their ecological impact. The invoice reaches 501,000 euros according to the most generous estimate for the head of state. The flights he made yesterday to Jordan and Egypt have been discounted, for diplomatic reasons and to visit the French sailors embarked on the aircraft carrier Charles de Gaulle in the Red Sea. Le Point has the suspicion that, had he not been in Qatar before, the Elysée would not have scheduled these visits. A more severe calculation of the expense would reach 812,000 euros.

These figures are the result of calculating the cost per flight hour of the presidential Airbus A330 and the second replacement aircraft, a Falcon 7X that accompanies the main aircraft in case there is a breakdown. Using the first comes out to 22,482 euros per hour. The second, at 5,500 euros. The magazine recalls that 501,000 euros are equivalent to 31 years of minimum interprofessional salary.

Beyond the financial question, another controversial point is the environmental impact. According to the low estimate: 480 tons of CO2, equal to the average emissions of a French citizen for 53 years. The highest would place this footprint at 725 tons of CO2. According to Le Point , this energy waste is "a disastrous signal" from the president when it coincides with the celebration of COP15, in Montreal, on the protection of biodiversity.

The former environmental candidate for the Élysée, Yannick Jadot, declared a few days ago that, instead of flying to Qatar, Macron would have had to use the plane to go to Montreal for the environmental conference. Jadot and other leaders of La France Insoumisa (LFI, radical left) deplored that the president was in the emirate and even publicly praised his organization when the scandal over payments and gifts made to members of the European Parliament who allowed themselves to be corrupted had already broken out. .

In some media, such as CNews, and on social networks, there were reactions of strong disapproval for the excessive prominence of Macron from Qatar. The president, who had followed the final with passion, taking off his jacket during extra time, went down to the pitch to console the players before the trophies were handed out. Macron paid particular attention to the team's top star, Kylian Mbappé, who scored all three of Les Bleus' goals and the first penalty of the decisive and fatal shootout for France. The head of state repeatedly stroked his head, hugged him and whispered words in his ear. He then repeated the same thing at the medal ceremony as a finalist. Mbappé seemed visibly uncomfortable with the presidential outpourings and never looked at Macron.

An editorial writer for the BFM-TV network denounced the political instrumentalization made by the president and, ironically, said that "he confiscates not only victories but also defeats." The analyst was referring to when France won the title, in 2018, and Macron forced the bus carrying the players to leave them at the Elysee before the traditional parade down the Champs-Elysees. Other media such as Le Figaro and Libération echoed the reproaches and recalled that the president himself had recently said that he should not mix politics and sport. According to a comment by Libération, the president "ruined a moment in sport that did not deserve political instrumentalization."

Some users of social networks exploded against the president for the political use of the circumstances, knowing that more than twenty million French people were following the live broadcast. The adjective "ridiculous" was one of the softest. Others posted ironies and jokes. "A badly elected, detested president, still tries a dirty and rude political instrumentalization," wrote an Internet user.

On CNews, a station often critical of Macron, commentators considered his vehement speech in the locker room an abuse by the president, assuming the role of the coach, Didier Deschamps, who was next to him, mute. The players barely paid attention to him and did not second the president when he shouted the usual "Long live the Republic, long live France!"

Macron was also mocked online for having posted on his Twitter account a short text in French thanking the team (“You have made us dream”) in which there was a misspelling of the verb. When Elysee realized the mistake, he corrected it. Always demanding with his language, the French did not tolerate a presidential mistake in this area, even more so from someone who frequently adopts a professorial attitude and with a wife who taught him literature.