Cristiano breaks his drought and reaches his 700th club goal

So unpredictable as to go from conceding such painful goals like the one Manchester City endorsed him to starring in a comeback with authority at home to the team with the fewest goals in the Premier League, Everton, who yielded to Antony's record and the first goal in the competition, at last, from Cristiano Ronaldo for a Manchester United that is storming fifth place. 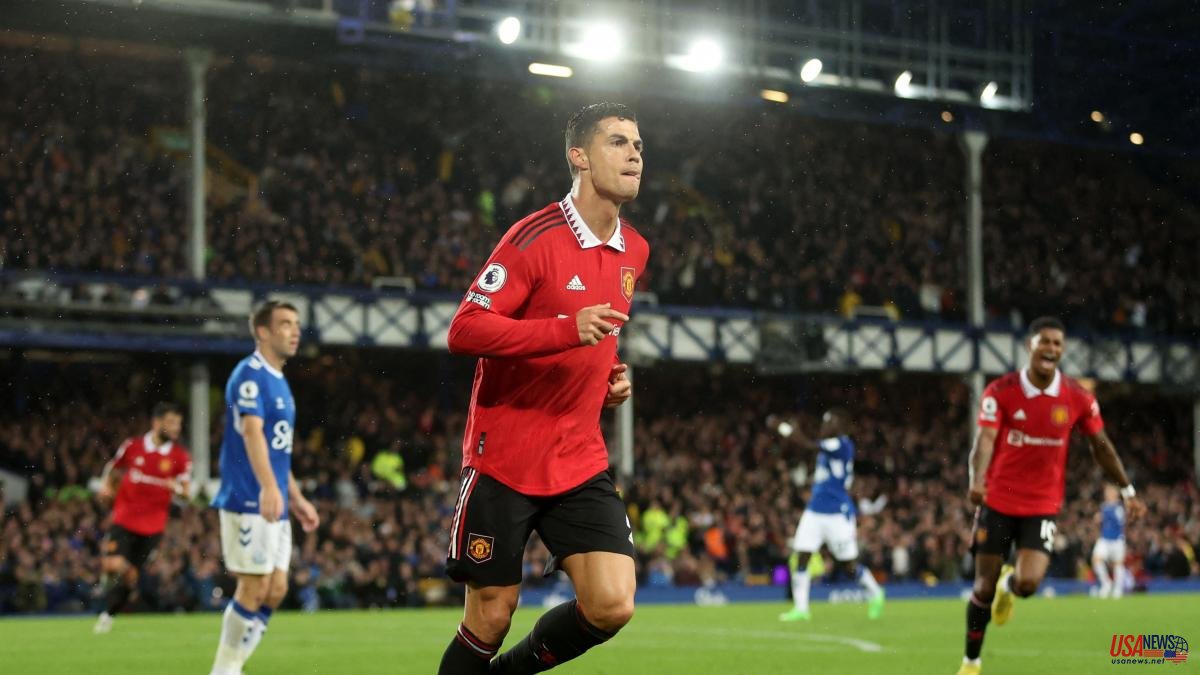 So unpredictable as to go from conceding such painful goals like the one Manchester City endorsed him to starring in a comeback with authority at home to the team with the fewest goals in the Premier League, Everton, who yielded to Antony's record and the first goal in the competition, at last, from Cristiano Ronaldo for a Manchester United that is storming fifth place.

The suffering of the last minutes, with Everton desperately looking for a point, does not tarnish the personality shown by Manchester United to get up. With Casemiro in his first start in the Premier, with enough experience not to sink due to an error that cost a goal and end up being key in the pass of the comeback goal.

The match was born when a pressure robbery to a slow Casemiro at the start of play cost his team dearly after five minutes. Onana took his bag from him and Iwobi invented a great goal, cornered from the front, with a right hand against which David de Gea's flight could do nothing.

It was the most difficult yet for Manchester United against the team with the fewest goals in the competition, an Everton that until now had not conceded more than one goal per game on any matchday. But the blow did not stun Ten Hag's men, who dominated the ball, with Eriksen imposing criteria and Bruno Fernandes wasting energy.

He returned the play to the quarter of an hour in a goal that is history. The inaccuracy in the starting phase was committed by Iwobi with a bad pass to Gueye, who was slow to react. When he realized the ball had already fallen to the side where an inspired Antony was unforgiving. Lethal counterattack, definition with left foot adjusted to the post and record. Never in the history of Manchester United has a player scored in his first three games.

The goal felt different to each team. He knocked out Everton, unable to generate dangerous actions, defending himself against a rival he wanted more. Eriksen tested Pickford and Cristiano, again a substitute, entered the scene due to a muscular problem with Martial.

Plugged in the Portuguese from the first action. Eager to prove. He found Casemiro in the first, without the Brazilian defining well but with Bruno Fernandez sending the rebound into the net in an action invalidated for offside.

It was a warning, like Casemiro's header at pleasure to Rashford's measured pass in search of correcting his mistake in some way. It was not with a goal, but with a decisive pass. From an incomprehensible mistake in his own field, he recovered by stealing the ball with character from Iwobi to launch a deep pass into space at Cristiano's run, who defined his first goal in the Premier this season with his left foot on the tenth day. His official 700 in clubs.

The objective of the 'red devils' was achieved on the brink of rest. They wouldn't mind taking a step back in the second act to render an Everton bereft of ideas helpless. Only from set pieces did he worry while United hoped to sentence the counterattack.

So he forgave, after a header from Onana, in search of Eriksen's squad or the goal that should have been the finishing touch, from Rashford, after leaving two defenders fortunately and scoring with quality but seeing how the video arbitration reported a hand in a rejection in your favor. And it caused the final nervousness, when De Gea appeared to save a vital victory, taking out with a beautiful stretch the center converted into a Garner shot.

Incidents: match corresponding to the tenth day of the Premier League played at the Goodison Park stadium in Liverpool before 39,258 spectators.