Creepy images that have been seen today at the Austrian Grand Prix with the car of the Spanish Carlos Sainz as the protagonist. 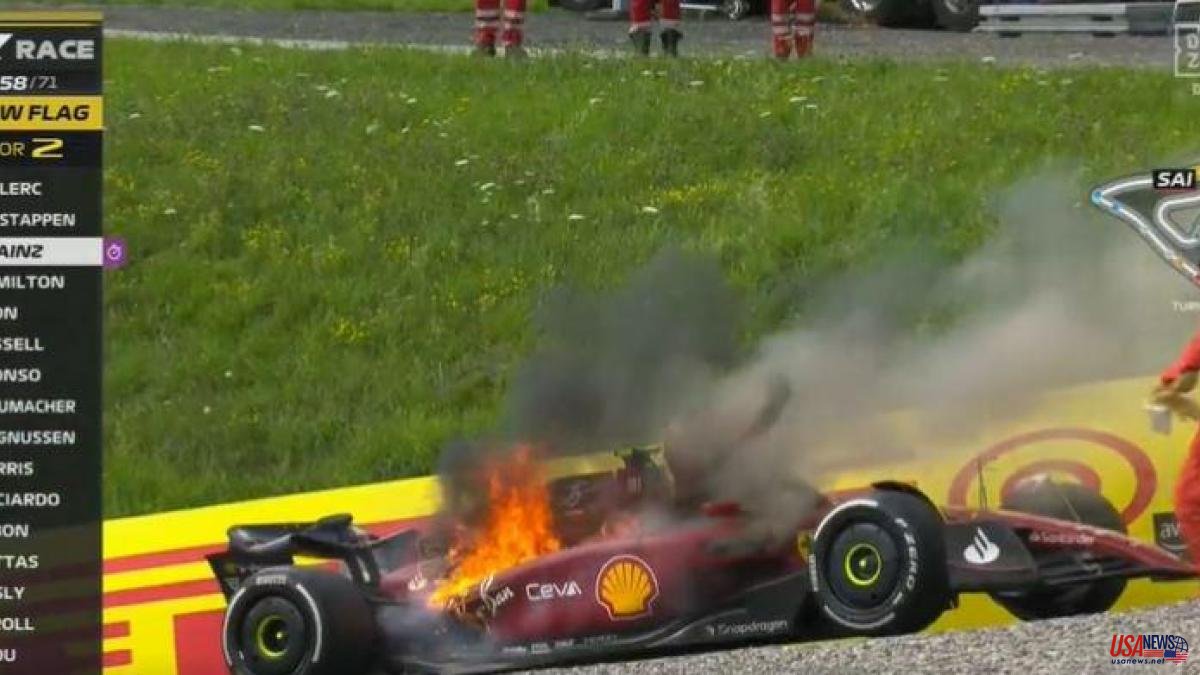 Creepy images that have been seen today at the Austrian Grand Prix with the car of the Spanish Carlos Sainz as the protagonist. His car has suffered a breakdown and has begun to burn due to the passivity of the race marshals, who have been slow to come to the rescue of the Ferrari driver, who was asking for help in the flames.

They have been agonizing moments, while the car continued to move as it was on a slope and nobody came to put it on, leaving the Spaniard trapped in his car. Finally, Sainz had to jump out of the moving car to avoid being caught by the flames that were rapidly spreading through the car.

The incident took place on lap 57 of the Red Bull Ring circuit when the Spanish driver, who was riding in third position, was about to overtake Max Verstappen. It was at this very moment that Sainz's Ferrari broke its engine and started to burn.

After a few seconds of tension, the pilot has been able to get out of his car and has been sitting on the asphalt, desolate, while they put out the flames of the vehicle. After a very good race, the Spaniard left Austria empty-handed and moved away from Verstappen in the general classification.

The driver explained how he experienced the tense moment: “I was uphill, I saw fire at the back of the car, I tried to get out, the car was going backwards. I called for assistance but I don't really know why they took so long to come and I had to jump out of the car without it being stopped. We have to see what can be improved in this regard”.

The engine failure has come at the worst time for Carlos Sainz, who was about to overtake Verstappen and take second place: “We had Red Bull winning the game and I think we were assured of first and second place. It was the best weekend of the season in terms of pace. It's a shame, I don't have too many words. There are many points that we are losing and it is a missed opportunity after the good run we had”.

The Red Bull driver was second at Spielberg, behind Leclerc (Ferrari) and continues to lead the Formula 1 World Championship with 181 points. Checo Pérez (Red Bull) is second with 147 points, followed by Leclerc (138), while Carlos Sainz remains in fourth place with 127 points, far from the leader.