Craviotto, Cooper, Arévalo and Germade take revenge on Germany and are gold in the K4 500

Saúl Craviotto, Marcus Cooper, Carlos Arévalo and Rodrigo Germade, Olympic runners-up, won gold at the sprint canoeing World Championships in Halifax (Canada), with a display of authority ahead of Germany and Ukraine. 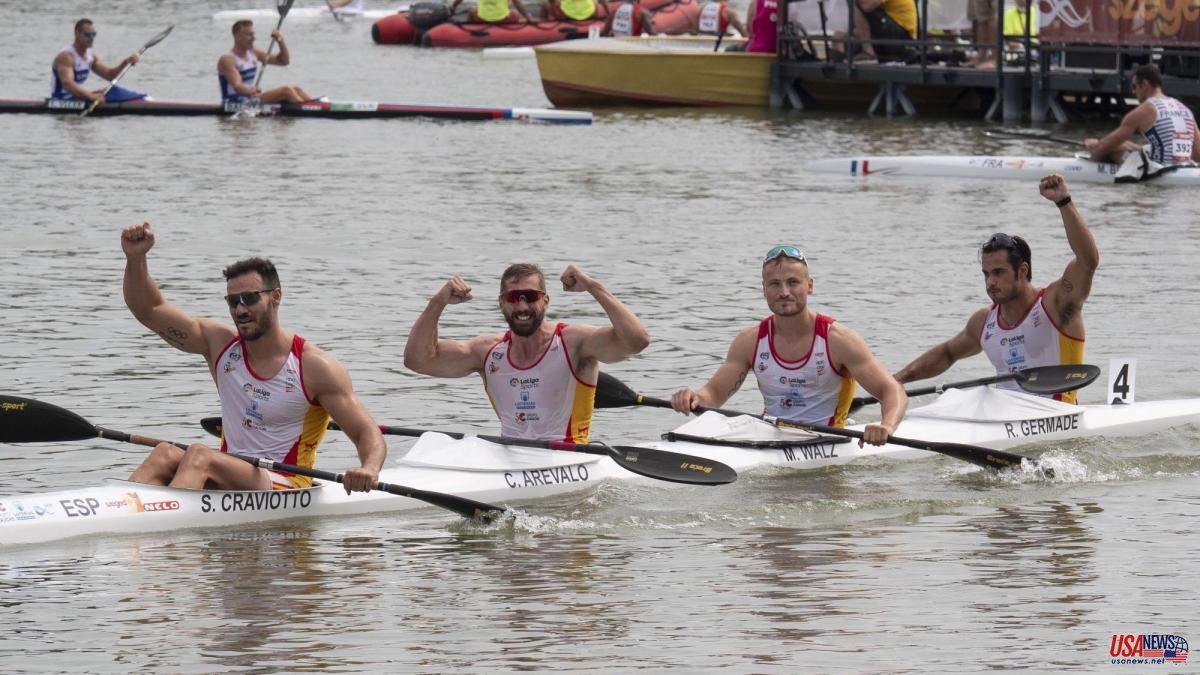 Saúl Craviotto, Marcus Cooper, Carlos Arévalo and Rodrigo Germade, Olympic runners-up, won gold at the sprint canoeing World Championships in Halifax (Canada), with a display of authority ahead of Germany and Ukraine. The day was fantastic for Spanish canoeing thanks to the gold of Cayetano Martinez and Pablo García in C-2 500 and the silver in K-2 200 Teresa Portela and Sara Ouzande. This Sunday the Spanish delegation will participate in up to ten finals.

Spain won the pulse of the Olympic champion, Germany, in a distance that will be seen again in Paris 2024. With the power shown by Craviotto, Cooper, Arévalo and Germade, dominating the test since passing through the 200 and with an unattainable finish for his rivals that made them arrive exhausted with a mark of 1:20.83.

Germany, with the quartet made up of Max Rendschmidt, Tom Liebscher, Jacob Schopf and Max Lemke, ended up giving in and reaching 43 hundredths of a second. Ukraine was third, defending the title, at 55 hundredths.

The Spaniards lowered the mark that gave them access to the final by almost a second, the third in the qualifying series behind the crews of Germany and Slovakia. They gave the Spanish delegation the second medal, both gold, after the one achieved on Friday by Juan Valle in the KL3 200 paracanoe.

Spanish canoeing was able to celebrate another two medals in a fantastic day. On the one hand, Cayetano Martinez and Pablo García achieved another gold in C-2 500 and Teresa Portela and Sara Ouzande achieved silver in K-2 200.

The good feelings of Tano García and Pablo Martínez, the best time in the three qualifying heats, were confirmed in the grand final in which they were proclaimed world champions for the first time. The Sevillian duo came from being ninth in the last World Cup and made an exhibition of strength with a mark of 1:46.32, 48 hundredths ahead of the Poles Wiktor Glazunow and Tomasz Barniak and 58 ahead of the Chinese Kao Liu and Bowen Ji.

"We have had problems in the last month and we have been able to overcome them to end up being world champions. We only thought about giving our best. We trained to achieve this success. We appreciate the support of everyone to be number one in the world", they declared. the world champions as soon as they finish their test.

The Spanish delegation equaled the medal mark of the last World Cup with one day of competition still to go, with its third success on Saturday starring Teresa Portela and Sara Ouzande in the K2 200 speed test.

They were 20 hundredths of a gold medal, even overturning at the finish due to the great effort to achieve the silver medal with just 3 hundredths of an advantage (38.96) over the Canadians Andreanne Langlois and Toshka Hrebacka. The gold went to Hungary: Blanka Kiss and Anna Lucz won with a time of 38.76.