Countdown to the rebirth of Notre Dame

When Emmanuel Macron launched the phrase, the day after the fire, many thought it was too risky a bet, typical of a young and impetuous leader. 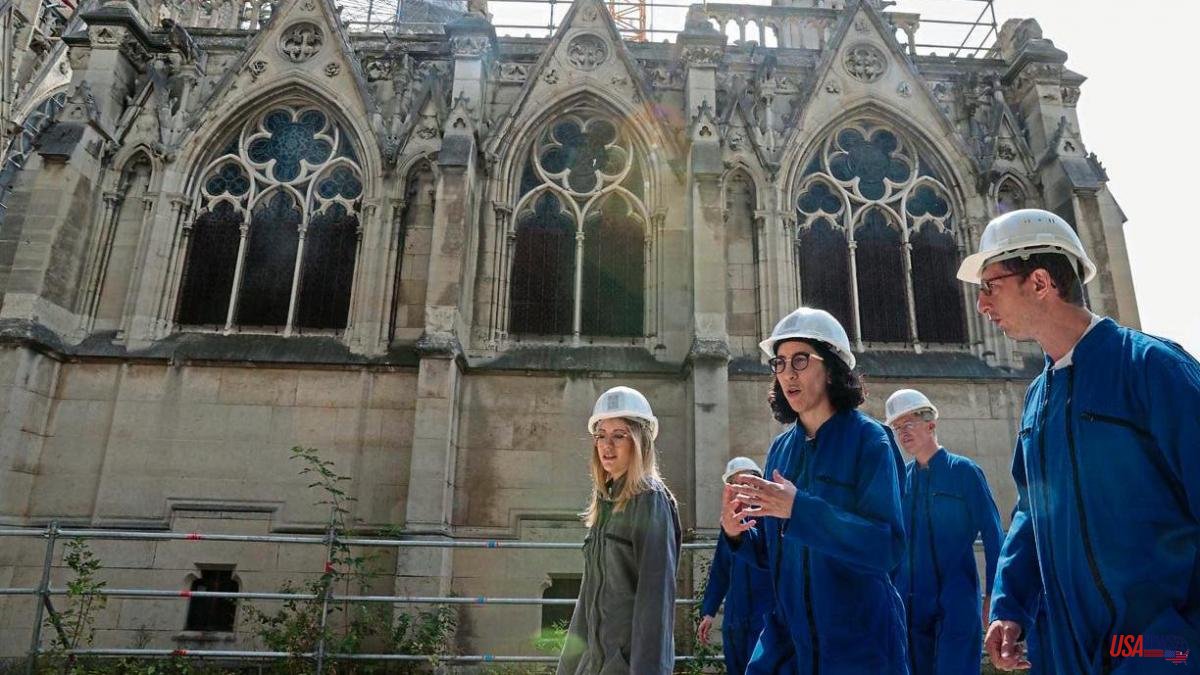 When Emmanuel Macron launched the phrase, the day after the fire, many thought it was too risky a bet, typical of a young and impetuous leader. The French president promised "to rebuild the Notre Dame de Paris cathedral, even more beautiful, within five years." It was April 16, 2019. The countdown to a colossal task began. The calculation was not improvised. The reopening was to coincide with the 2024 Olympic Games, a historic milestone for the city, for France and for the Elysée tenant's own legacy.

The vertigo was accentuated by the covid, which slowed down already very complex works. It took more than two years to complete the shoring phase of all the structures in danger, to ensure that no further collapses occurred. One of the challenges has been working in an environment of lead contamination. Several hundred tons of the toxic metal, present in the roof and in the spire, volatilized when it collapsed and due to the very high temperatures that were reached when the entire framework of wooden beams of the roof frame burned. Notre Dame was an oven. The lead reached the waters of the Seine. Even today, workers working in the cathedral and visitors must wear special protection and take a shower afterwards to avoid direct contact with the metal as much as possible.

A few days ago, the new Minister of Culture, Rima Abdul Malak, toured the interior of the temple. Aware of the pressure exerted by the calendar, she jokingly welcomed the fact that 2024, like all Olympics, is a leap year and therefore offers 366 working days instead of 365. Malak expressed her confidence that that in 2024 "a large part of the works" be completed, without specifying what he meant by "a large part".

Retired General Jean-Louis Georgelin, appointed by Macron at the head of the public entity in charge of the reconstruction, clarified that, barring imponderables, it is expected that in 2024 the cathedral can be delivered to the archbishopric of Paris in conditions "to celebrate worship" . “It will not be a provisional opening,” he said. This does not mean that, even with the access of the faithful and visitors, work can continue in some areas isolated from the rest. The chief architect, Philippe Villeneuve pointed out that there is a very precise planning but it would be necessary, to cover possible setbacks, to save time, by increasing work shifts and including the weekend.

Saving Notre Dame is a titanic task that has involved professionals from 130 different trades, from seasoned climbers to access all points of the building to stone carvers, carpenters, painting restorers and many others. One of the most immediate challenges is building the arrow on the roof. That will require mounting a scaffolding weighing 600 tons and 100 meters high above the floor of the main nave, which still needs to be reinforced to hold. Synchronizing such delicate work in a high heritage value environment is the main difficulty facing the team on the ground.

The increase in the cost of construction materials, due to global inflation caused by the war in Ukraine, forces us to be careful with the budget. Thanks to generous donations from companies and individuals around the world (340,000 patrons from 150 countries), 846 million euros were raised. In the consolidation phase, 150 million were spent. For the restoration, 550 million have been budgeted. That includes the costly set-up of the organ, a six-month job.

The theoretical surplus of 146 million euros is not such because Georgelin wants to use this money for the restoration of the exterior of the temple, which had already been programmed and budgeted for before the fire. For the general, dipping into the 146 million is something obvious because it would be "absurd", given the circumstances, to leave the restoration of the cathedral halfway. But not everyone thinks the same and there is controversy. It will be necessary to consult with the donors so that they do not interpret it as an abuse of their generosity.

Although there has always been a consensus that rebuilding Notre Dame was a national priority, there is a risk that, once again, Paris will exaggerate the country's financial resources and attention. The 146 million represent a significant figure, three times more than the annual budget allocated to restore the 87 French cathedrals owned by the State. It is estimated that this final phase in Notre Dame's rebirth could end in 2030. By then Macron will no longer be president, but whoever succeeds him will surely brandish the gleaming cathedral as a sign of organizational efficiency and collective pride.