Colleges and universities, focus of pressure against the women's revolt in Iran

It is almost three in the afternoon and dozens of young people finish their school days in the Tajrish area, in the north of the city, where dozens of schools are located. 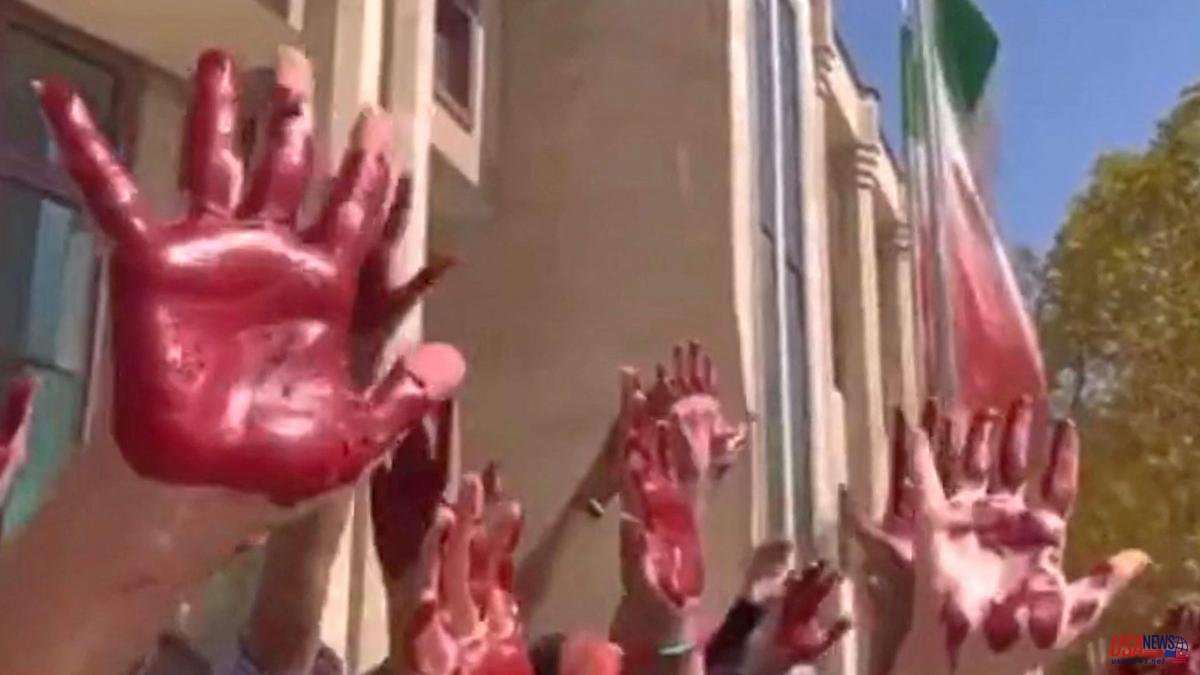 It is almost three in the afternoon and dozens of young people finish their school days in the Tajrish area, in the north of the city, where dozens of schools are located. In groups or alone, the young women walk home, as they do every day, but this time the scene is far from ordinary. The roundabout they have to pass through is populated by a dozen uniformed men, this time the basij, the paramilitary body attached to the Revolutionary Guard. Some of these men chat around their motorcycles. Others do it in a small nearby meadow. One of them exposes one of the weapons with which they fire rubber bullets to disperse the protests.

Despite this scenario, dozens of these young women have dropped the veil when leaving class. A scene that at the same time is repeated in different sectors of the city; even in the most traditional. Some wear long braids that fall along the back, others wear it in a bun and a few wear it short, very short. It is their way of protesting after the authorities have increased pressure on schools to prevent the repetition of images that populated social networks days ago where schoolgirls in many parts of the country sang slogans against the Islamic Republic, broke images of Ayatollah Ali Khamenei or they took photos with their hair in the air and the middle finger pointing towards the sky.

Many more went on strike refusing to enter class or recorded themselves singing the song Por by Shervin Hajipour, which has become a symbol of this popular mobilization that has spread throughout the country.

After four weeks of protests, the military forces and their collaborators dressed in civilian clothes deployed in the street no longer prevent these young women -and the rest of the women- from dropping the veil, but rather they do not group together and sing protest slogans. “Our teachers are under pressure and every time we try to sing something, they order us to shut up,” says a 16-year-old who identifies herself as Mina. She assures that her school is quite religious and they watch them all the time. "They have threatened us with punishment," says this young woman who is wearing a blue trench coat that serves as a school uniform and with the veil fallen completely back. Sara, her friend, goes with her head covered and nervous.

It is the youngest, especially women, and often schoolgirls, who have led the mobilizations in the streets. An example of them are Nika Shakarami or Samira Esmailzadeh, two 16-year-old adolescents whose death during the mobilizations has deepened the pain of the population, who took to the streets moved by the death of Mahsa Amini, 22, after having been captured by the morality police.

The insistence of the authorities on stating from the beginning that Mahsa, or Jina by her Kurdish name, died of a heart attack has created even more outrage, as other versions of witnesses affirm that the young woman was beaten. Mistrust of the versions given by the Nizam, or the system, flourished again with Nika's death, which the authorities attribute to suicide. Her mother has not only denied this version, but she has denounced the pressure of the system not to speak.

The control over the schools began to become greater since Saturday, when the protests in the country were reactivated. Until then, the universities had already been the object of intimidation, but in recent days there have been reports on social networks indicating how the forces of the law are approaching secondary schools. In some places they have come to check the phones of young women in search of images that reveal their participation in the protests. Other versions speak of vans parked at the entrance of educational centers - schools, but also universities - ready to transport detainees.

“The attitude of the authorities with the schools only shows their weakness. Why do they want to persecute minors under 18? ”, Fariba, a 20-year-old law student who asked to change her name, asked yesterday. She, who wears her head covered with the traditional mahnaé of the students -she only shows the oval of her face-, walks through the center of the city with another companion who has the same veil pulled back. "This is the Iran we want, I like to cover up, but I think it's fine that my friends don't want to do it," she explains.

One of the images that was shared the most on the networks yesterday was that of a young schoolgirl offering free hugs in the streets of the city of Kermanshah, in western Iran. And in one of Tehran's universities, students painted their hands red in protest at the violence of the authorities. “Poverty, corruption and injustice, shame of tyranny”, were some of the slogans they chanted.

Pressure from students has also led the authorities to close universities and colleges in Sanandaj, the capital of Iranian Kurdistan, where clashes are growing by the day.

Also yesterday, the workers of the Asaluyeh refinery, in Bushehr, in the Persian Gulf, joined the protests. Already last Saturday, some sectors of commerce, especially the bazaars, also closed their businesses. In response to these latest events, the head of Justice, Gholam Hussein Mohseni Ejei, tried to calm things down by raising the possibility of talks. “If you have any questions, objections, criticisms or ambiguities, let's talk together!” he said.

In parallel, the Government has launched a campaign to show the police as defenders of the population. According to the authorities, 24 members of the security forces have been killed so far. Yesterday, many did not believe that the intentions of this proposal were sincere. "They call us vandals, the authorities shoot and say that we are puppets of foreign forces," concluded Nilufar, Fariba's friend.