City were at their fiercest in the Manchester derby, steamrolling United on one of the best evenings in memory at the Etihad Stadium. 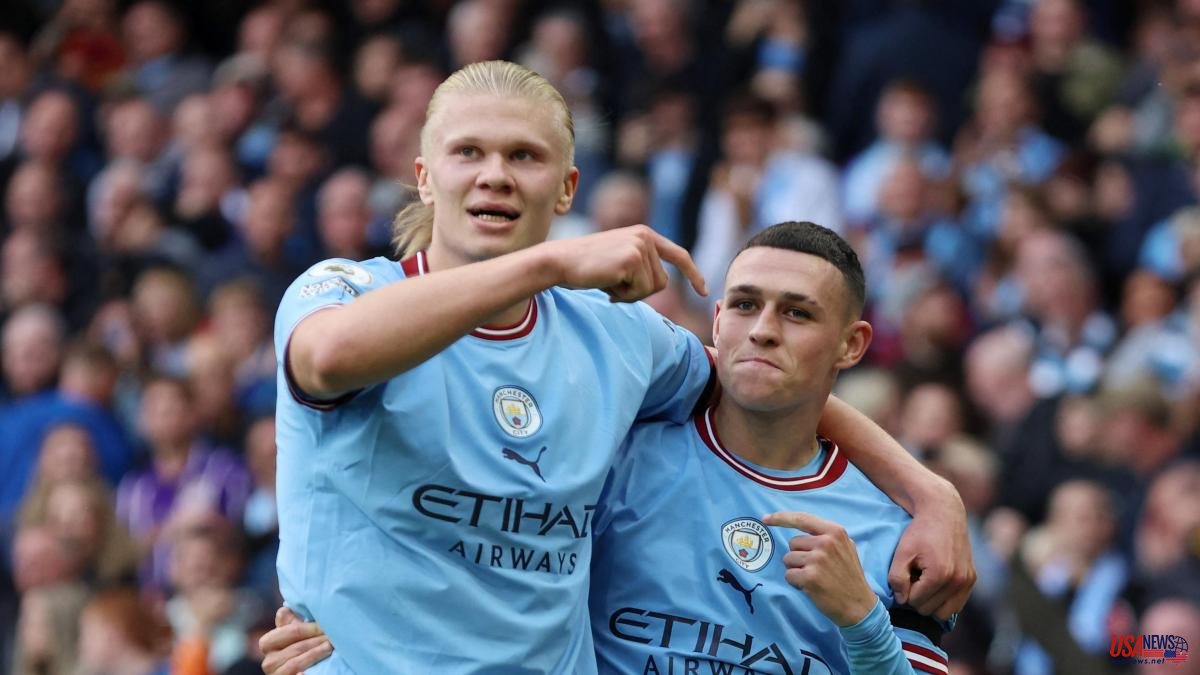 City were at their fiercest in the Manchester derby, steamrolling United on one of the best evenings in memory at the Etihad Stadium. An unprecedented 6-2 in the last decade. You have to go back to October 23, 2011 to find another similar win (1-6) in a derby. And also the derby with the most goals in history (9) in the 187 duels in which they have faced each other over the years. A derby for history in which Erling Haaland wants to continue writing his name in gold letters. Three goals and two assists with his signature. The last Citizen to score a hat-trick in a derby was Franny Lee in 1970.

The duel had hardly started when Guardiola's team warned of what they were capable of with a double chance in which first De Bruyne, providentially rejected by De Gea, and then Bernardo Silva tried to get ahead on the scoreboard. It would not take long for the goal to arrive, in the 8th minute, from Phil Foden's boots who, in true futsal style, sent the ball to the back of the net after a masterful combination by the Citizens.

Gundogan hit the post with a powerful shot on another occasion for City, who were completely wiping United out of the game. At 23 minutes, his two full-backs already had a card, an example of how overwhelmed his defense was to try to stop the locals' offense. And the worst was yet to come.

After De Gea, the only one who was saved in an impotent United, avoided De Bruyne's goal with the tips of his fingers, the incombustible Erling Haaland would appear. Erik ten Hag said in the preview that the Norwegian would not be his only concern in the derby: "We are not playing against Haaland, we are playing against Manchester City," he said. But the truth is that the striker who arrived in Manchester this summer once again showed that he is from another planet.

In just ten minutes, Haaland scored two goals and one assist, bringing his tally to 13 in the eight Premier League games he has played for City. The first came with a header, coming out of a corner, in minute 34. Three minutes later he sent, with great quality, a masterful assist from De Bruyne to the back of the net and in minute 44 he would become an assistant to give Phil Foden the fourth. A landslide and humiliation for a United team that went into the break while watching a large part of their fans leave the Etihad Stadium.

The break gave Ten Hag's men some air, who enjoyed their best minutes at the start of the second half. United had possession and were closing in on Ederson's goal, until he found the goal. Anthony picked up a pass from Eriksen and plugged it in tight to the post with a powerful shot in the 56th minute. But far from being a turning point for United, the goal provoked a strong reaction from City, who started the steamroller again.

Haaland continued to make history scoring 5-1, his particular hat-trick. But the Norwegian striker wouldn't have enough and shortly afterwards he would demonstrate again the great connection that exists with Phil Foden by assisting him for the second time to also score his third goal of the afternoon. In the last minutes, Anthony Martial tried to cover up the humiliation. The United footballer scored the 6-2 in a rebound and would see the goal again in added time converting a penalty in the 6-3 that would end up being final.

Check here all the results and the classification of the day