China adjusts its definition of death from covid downward

With the largest wave of coronavirus since the pandemic began hitting the country, China confirmed that it has limited its way of defining what it considers a covid death. 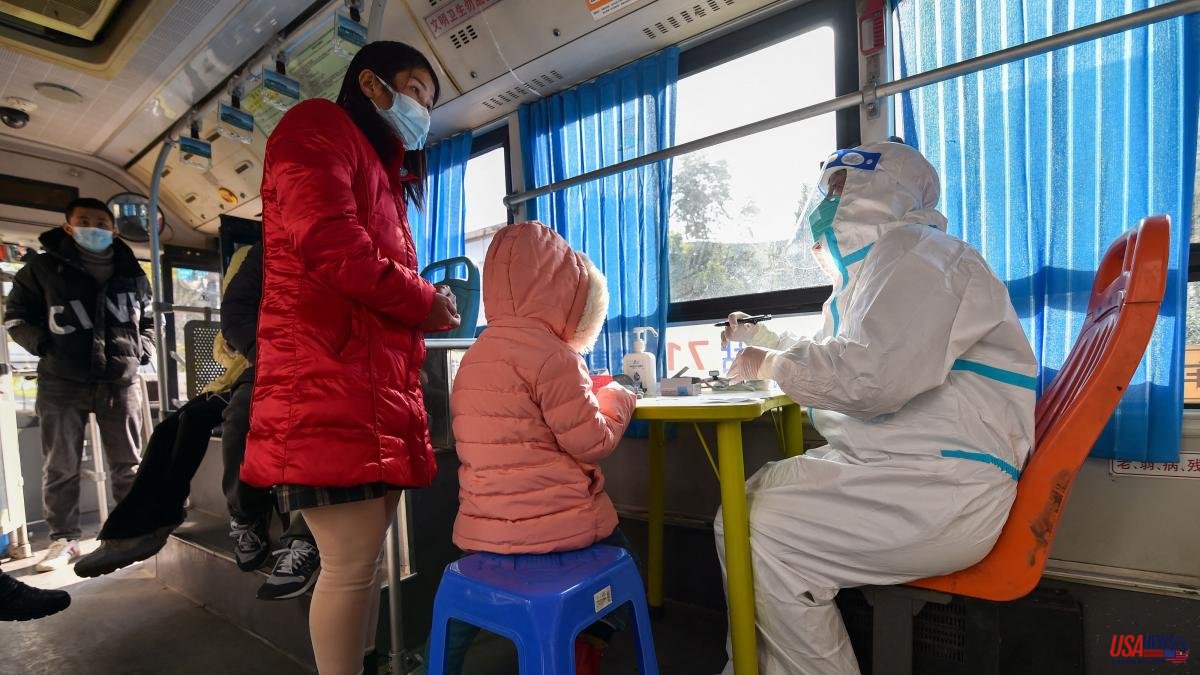 With the largest wave of coronavirus since the pandemic began hitting the country, China confirmed that it has limited its way of defining what it considers a covid death. According to its latest parameters, the official registry only includes those who died from pneumonia or respiratory failure due to the coronavirus, and leaves the rest of those infected with pre-existing diseases off the list. A downward adjustment that sows new doubts about the real scope of the removal of anti-covid restrictions suddenly announced at the beginning of the month.

It was the epidemiologist Wang Guiqiang who confirmed yesterday that the deaths of positive patients caused by underlying pathologies "are not counted as deaths from covid." Before the press, the expert indicated that the omicron variant "rarely" causes respiratory failure, although he admitted that it can cause pneumonia in some patients. “Deaths from pneumonia or respiratory failure due to the coronavirus are classified as deaths from covid,” he asserted.

With these criteria in hand, the country did not include any new victims in its official count this Wednesday (it announced two on Monday and five on Tuesday, the first official deaths since last December 3). In fact, the authorities subtracted one death from the total deaths in the pandemic, which currently reflects 5,241 victims, without giving explanations.

Experts such as Benjamin Mazer, from Johns Hopkins University, criticized that with these criteria "many cases" will be overlooked that are indeed counted in other countries, especially taking into account that people who are already vaccinated and contract the virus have less likely to die of pneumonia.

“There is no point in applying this kind of March 2020 mentality where only Covid pneumonia could kill you when we know that in the post-vaccine era there are all kinds of medical complications,” he told Reuters.

The latest clarification from the authorities comes at a time when the number of positives has skyrocketed with the end of the restrictions announced after the unprecedented street protests that broke out due to the population's weariness towards continuous controls.

As a result, numerous hospital centers are now overflowing with patients and with a large part of their staff infected, there are shortages of medicines in pharmacies and the streets of cities such as Beijing or Shanghai appear semi-deserted as the population remains in their homes, due to fear to catch the virus or because they already have it.

To avoid the collapse of the hospital system, the authorities have accelerated the implementation of the so-called "fever clinics", to which those positive cases suffering from mild symptoms must go. They are also working piecemeal to increase the number of beds available in intensive care units and to provide resources to the precarious medical centers in rural areas, where an exponential increase in cases is expected when the massive migration to the towns that each year brings with it the impending Lunar New Year holiday.

However, the demolition of the zero covid policy does not end up being reflected in official statistics. The new rules announced at the beginning of the month put an end once and for all to the continuous campaigns of PCR tests that had been habitual for months, which translates into the detection of a smaller number of infected people. To this is added that the Chinese National Health Commission has stopped counting asymptomatic cases because "it is no longer possible to determine their real number."

The official number of deaths does not add up for many either, much lower than that of other countries when they began their opening processes, or even that registered by Chinese cities such as Hong Kong or Shanghai when they suffered large spikes in the number of infections in past months.

In recent days, various media outlets have reported a notable upturn in activity in various morgues and crematoriums in some large cities such as Beijing, although they have not been able to confirm that it is directly due to an increase in deaths from coronavirus.

In social networks, numerous users assure that it is "impossible" that the number of casualties offered so far is real. "I know of many more people who have died in recent days regardless of those figures that we see in the statistics," comments a user of Weibo, the Chinese Twitter.

Numerous experts have warned in different studies that the death toll in the Asian giant could range between one and two million people because its population lacks group immunity - the official number of infections to date during the pandemic does not reach nor 1% of the population - and because the vaccination rate among the elderly remains low. According to the latest data, only 66% of those over 80 years of age have been vaccinated with the complete regimen, a figure that drops to 40% for the booster dose.

With the virus unleashed across the country, some foreign epidemiologists fear a mutation to more dangerous strains that could affect other countries, risks that other experts have downplayed.

“I don't think this is a threat to the world. Most likely, the virus behaves like any other human virus and adapts to the environment in which it circulates by becoming more transmissible and less virulent," said Paul Tambyanh, president of the Asia Pacific Society for Clinical Microbiology and Infections.

Even so, several scientists from the World Health Organization have pointed out that the expected increase in cases in China casts doubt on the end of the global emergency phase for now.

Meanwhile, the Chinese authorities continue to approve new relaxations -yesterday they decreed the end of the requirement of a negative PCR to travel between regions by land-, they minimize the effects of omicron in the state media and leave prevention tasks in the hands of citizens. “Be the first person responsible for the pandemic”, underlines an official slogan that has recurred in recent days in the capital.