Check the Govern: Neither so brave, nor so cowardly

At a table set up for eight people you can squeeze to eat ten, but between the domes of ERC and Junts the friction does not make love but quite the opposite. 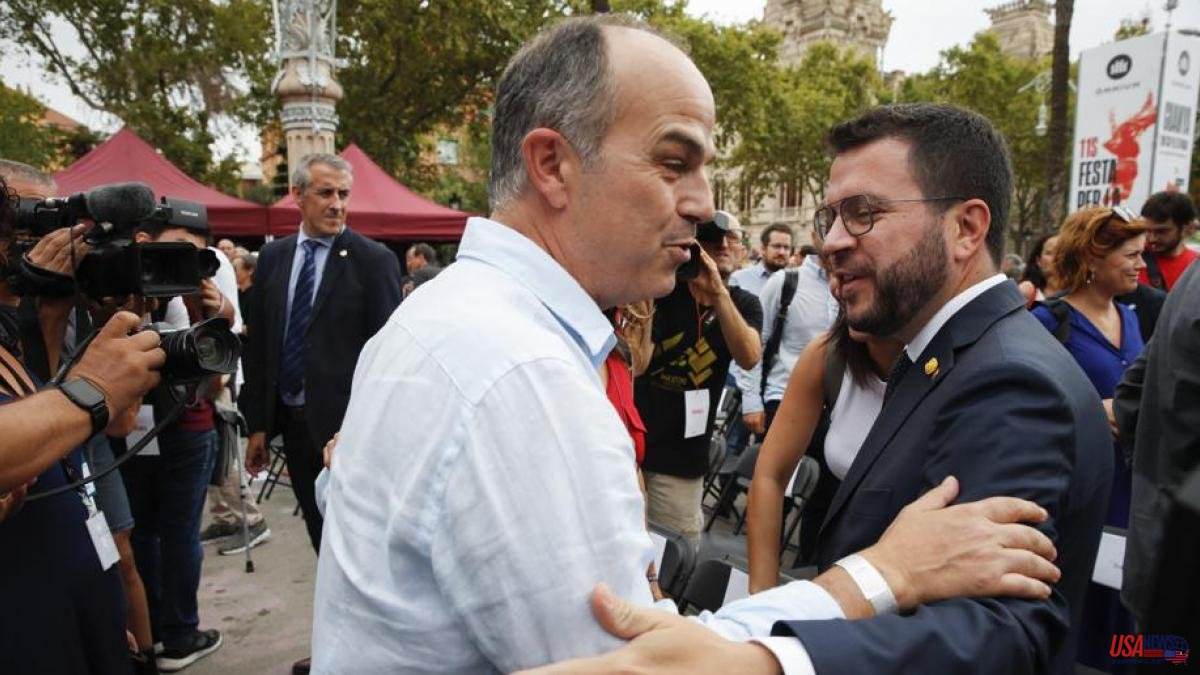 At a table set up for eight people you can squeeze to eat ten, but between the domes of ERC and Junts the friction does not make love but quite the opposite. Junts has put a noose around his neck by publicly linking his continuity in the Government to a gesture by Pere Aragonès. And the president responded on Wednesday at the Palau de Pedralbes. He threw the republican cavalry over the top of them. “We cannot continue like this”, had been Jordi Turull's ultimatum to ERC after the audit of the government pact that led to the investiture of Aragonès. “Enough” of externalizing internal debates, “so far” of delegitimizing the president, came to be the reply of Aragonès and his troika at lunch with Turull, Laura Borràs, Jordi Puigneró, Albert Batet and Josep Rius.

Aragonès is not a friend of dead lines. Neither to bury the dialogue table, nor to call a referendum, much less to proclaim independence unilaterally in a year, as the ANC requests. There, even Junts agrees. And it does not tolerate that its institutional role is questioned. In case Vice President Puigneró comes up with the idea again to say that the president does not speak on behalf of the Government, in ERC there are those who already carry in their pocket the article of the Presidency law that establishes his powers.

Turull entrusts everything to an ERC gesture that ERC is not willing to grant in the publicly required terms. If in a year and a half there has been no consensus on a strategic direction for independence, "we will not fix it in fifteen days," the Republicans maintain. The coordination meetings held every Monday in a restaurant in the Eixample do not go beyond going "fatal" and this week's, despite the solemnity of Pedralbes, was "just as fatal". The menu of reproaches increases and certifies that the wounds of 2017 have not been overcome. In fact, they are increasing. All Borràs' interventions were to remember his suspension: “what you have done to me”.

They do not share or transport. Marta Vilalta and Rius arrived at lunch in Pedralbes just in time from Madrid. They had represented ERC and Junts in the political delegation that accompanied Anna Gabriel in her appearance before the Supreme Court, but Vilalta went by AVE and Rius by plane...

The negotiation is stuck in the diagnosis and in exposing the contradictions of the competitor. To preserve the image, ERC applies the same poultice as in its confrontations with the central government: "trust must be rebuilt". And wait… digging into the wound: Can Puigneró defend the DUI in 2023 and propose a transfer of Rodalíes in ten years? Does Giró keep the door open for the PSC to approve the budgets and does the Junts management want to leave the Government?

The Minister of Economy is campaigning to maintain the agreement and drives along a parallel highway seeking support for the accounts beyond public meetings. Before the holidays there was lunch with Salvador Illa -telephone contact this week- and a meeting with Joan Carles Gallego. He tries a budget agreement with 4 (ERC, Junts, PSC and commons) that the Republicans do not want due to tactics and many in Junts disdain in memory of 155.

Meanwhile, Carles Puigdemont's reluctance to continue in the Govern resurfaces. The former president did not want to enter last year and, once inside, he is in favor of leaving as soon as possible, although he never says so in public. Neither before as president of the formation nor now as a militant. For her part, Laura Borràs has advocated the breakup on half a dozen occasions since she presided over Junts and if the fright is “perfectly possible”, she is also able to stay, they reply at home. ERC has also exposed its arguments to stir up the discussion.

On Wednesday, he conveyed to the post-convergence leadership his will to maintain the agreement -Aragonès maintains "intact" confidence in his ministers-, but not at any price. “We contemplate all the options”, they maintain. Formulas of coexistence without the need to "govern together" were even put on the table. In the organization of the 9-N referendum, in 2014, ERC was in opposition... They even used the polls. The Republicans do not take off, despite holding the presidency, but there is no study that grants Junts more than 25 seats. The independentist sum is becoming more difficult... Neither so brave, nor so cowardly; The check on the Government and its electoral consequences also endanger the pro-independence majority at the polls.

For Junts supporters of maintaining the alliance, the list of benefits in an exit from the Government is brief if you look beyond the discourse of the confrontation without an instruction manual. The party is still under construction, its president is suspended, the general secretary is disabled; the ministers are not deputies, so they would not have any platform; and, seven months before the elections, the surviving mayors of the CDC-PDECat-Junts journey need institutional support. The speakers would be limited to the parliamentary group but, in the opposition, Batet and Rius are far from puffing up as Felip Puig did in the 2006 legislature. “The first group of this Parliament….”, he repeated like a hammer at the beginning of each appearance… Together is the third.

Turull has imposed silence on the Junts executive: "no tweets" and statements, the fair ones. Puigneró's unforced error with the ANC had the dubious virtue of turning the post-convergence opportunity to capitalize on the Diada demonstration into a new internal controversy. The plan was to seek centrality between the ERC and the ANC after the president slammed the door to the demonstration, and it was once again "a missed opportunity".

After the demonstration of the Diada, in the Palau de la Generalitat they ran on Monday afternoon to summon the independentist entities. Òmnium is working on its proposal to reactivate the joint work spaces of the independence movement, which also involves reevaluating the weight of the entities, and the ANC is out of tune. After the “independence or elections”, a coffee meeting was enough to improvise the demand for a unilateral declaration of independence in the second half of 2023. How? Dolors Feliu was asked. "I don't know, we'll see." Junts does not share the idea of ​​the ANC but the photo deepens the gap with ERC. And it goes on…