Alex Maskey, the speaker of the Stormont Assembly and a Northern Irish politician who on Tuesday shook hands with King Charles III (but did not bow his head) and offered his condolences on behalf of the provincial government, was an IRA militant , arrested on two occasions by the British authorities without charges being filed, the object of several attacks by loyalist paramilitaries linked to the State. 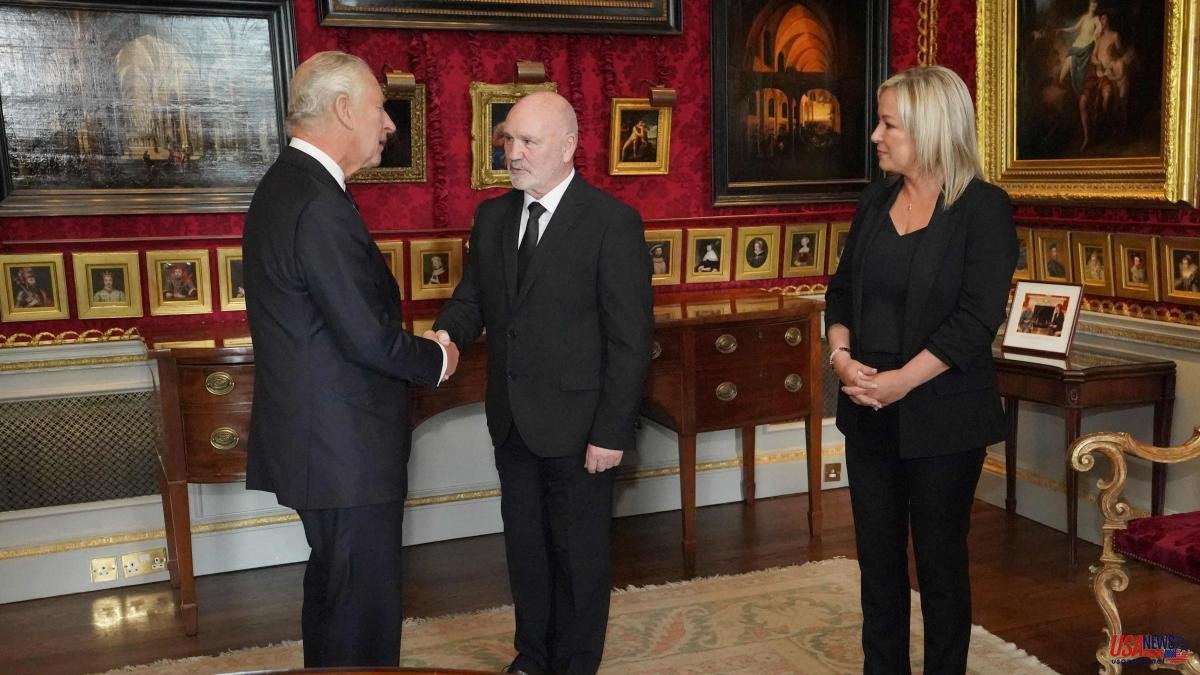 Alex Maskey, the speaker of the Stormont Assembly and a Northern Irish politician who on Tuesday shook hands with King Charles III (but did not bow his head) and offered his condolences on behalf of the provincial government, was an IRA militant , arrested on two occasions by the British authorities without charges being filed, the object of several attacks by loyalist paramilitaries linked to the State. A symbol of the long journey of the peace process.

It is not the first time that the new monarch, whose godfather and mentor, Lord Mountbatten, was assassinated by a bomb from the Irish Republican Army, has participated in a gesture of this nature, having greeted Gerry Adams in 2015, a character of much more senior in the IRA than Maskey, and who gave the green light or at least was aware of most of the attacks committed by his side during the troubles. The king's main goal is to preserve unionism, but that doesn't stop him from chatting politely with old enemies, regardless of what he thinks of them. And for the leaders of the republican movement, the objective is reunification, but they maintain their forms and treat Carlos with respect but without paying homage to him.

The king visited Belfast on Tuesday as part of his trips to England, Scotland, Wales and Northern Ireland after accession to the throne, and met with representatives of all the political parties that currently make up the Stormont Assembly. paralyzed by the boycott of the protestants of the Democratic Unionist Party, who lost the elections but refuse to appoint a deputy prime minister if the Brexit agreements regarding customs controls in the province are not modified. Although it was not a political act, its leader Jeffrey Donaldson took the opportunity to denounce once again the "attack on the sovereignty of the United Kingdom that means the permanence of Ulster in the single market, subject to the regulations and laws of the EU" .

The unionist community has acclaimed Carlos III with cries of "God save the king" upon his arrival, accompanied by the queen consort Camila, at Hillsborough Castle, where in 1998 the Good Friday agreements were negotiated, concluded and signed, and during a walk through the city center. It has been an occasion to reaffirm their support for the crown and their identity as part of the United Kingdom, while viewing the transition as a process fraught with danger, one that can fuel disaffection with royalty among Northern Irish tired of old tribal battles, open to the idea of ​​joining the Republic and thus remaining within the European Union (Brexit supporters are a large minority in the region).

The Catholic and Republican community (the two things are not the same but they go hand in hand) feel increasingly stronger, both for demographic considerations -they will soon be the majority- and for political reasons -Sinn Fein won the last elections, and if a government is formed, it will appoint Michelle O'Neill as prime minister. Even so, for the most radical wing it was a bad drink yesterday to have to greet a monarch they consider "foreign", and whose predecessors are responsible for the colonial subjugation of Ireland, repression and famine. In Ulster the ghosts of the 3,600 dead of the conflict are still very present, divided between both sides. The IRA assassinated Lord Mountbatten and carried out countless attacks, but the army, state security forces and paramilitaries acting under his protection killed as many people or more. And everyone remembers like it was yesterday.

The leaders of Sinn Fein, which aspires to govern in both Belfast and Dublin, and whose deputies do not occupy seats in the House of Commons so as not to be sworn in before the monarch, and which was born to combat the "forces of Corona”, have asked their followers not to write inflammatory messages on social networks. In the current situation, diplomacy prevails over the reaffirmation of republican values, although some do not like it. Its leader, Michelle O'Neill, had no problem taking part in events in honor of the queen, such as the mass at Saint Anne's Cathedral, but instead she was absent from those celebrating Charles's accession to the throne. A difficult balance.

“Carlos III is our king, and may God grant him health and a long life. But I am very afraid that he is going to have a hard time keeping the Union, at the moment he does not inspire as much veneration as his mother, ”says Victoria, a high school teacher and DUP voter in the Protestant neighborhood of Shankill Road. In the Republican stronghold on Falls Road, if you ask about either the new king or Elizabeth, people frown and shrug. Don't comment.