Already at the gates of the 20th century, in 1896, the Sala Parés on Calle Petritxol organized the first exclusively female exhibition to be held in Spain. 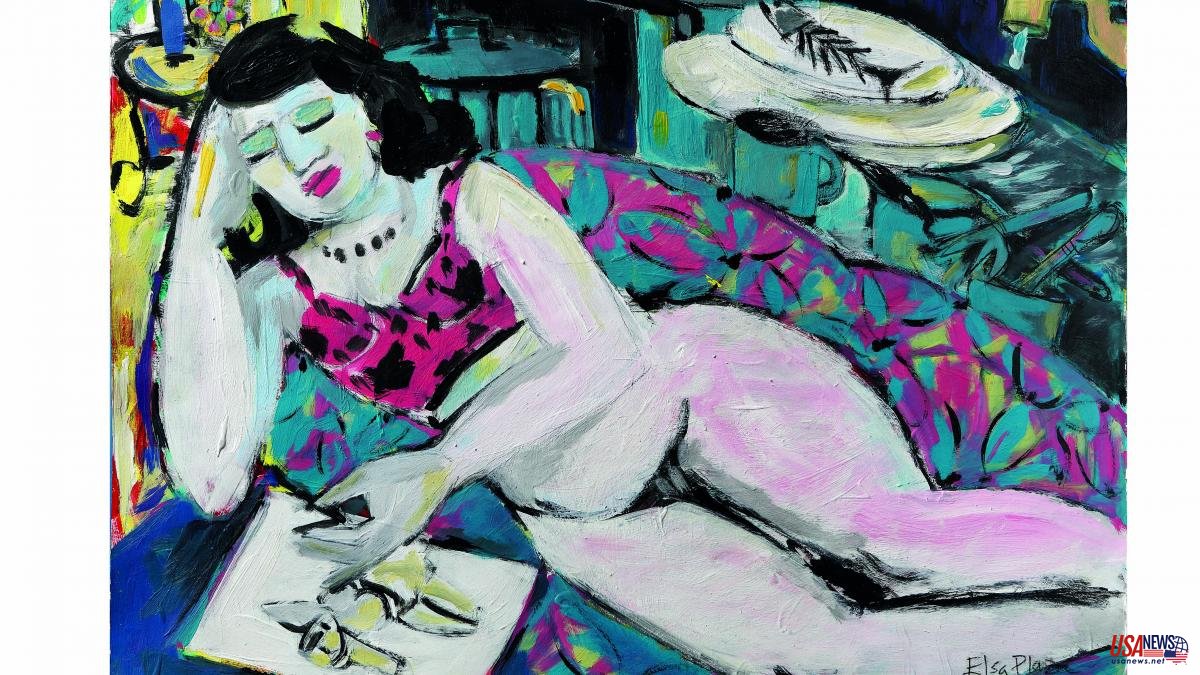 Already at the gates of the 20th century, in 1896, the Sala Parés on Calle Petritxol organized the first exclusively female exhibition to be held in Spain. A hundred artists participated and a good part of the critics, between puzzled and condescending, instead of talking about their creations, chose to comment on the physical attractiveness of their creators. In an article published in La Vanguardia, Raimon Casellas refers to the "lively and smiling spectacle" of La Parés, with "groups of extremely elegant young women reviewing the canvases, the work of their own hands or those of their friends, their acquaintances or fellow students; and the youth of the stronger sex, not knowing where to preferentially focus their attention, distributing their gazes between the paintings and their authors. Both have to do with each other, and although, placed in an alternative, we would not hesitate to put the enjoyment of contemplating the creators before the pleasure of admiring their creation, we are pleased to recognize the merit that the exhibited productions represent as a whole”.

Two years later, in a new article this time in La Veu de Catalunya, Casellas showed signs of regret. Not because of the lack of seriousness and the lightness with which he had dismissed the work of the artists, or because of the slimy tone of his criticism, but because at a bad time, he regretted, he had had the "occurrence of writing an article encouraging that feminist movement of art” (sic). The reason for that amendment is that she had received reproachful letters in which law enforcement officers accused her of promoting "a snobbery in skirts, much more ridiculous even than snobbery in pants."

The Parés Women's Salons were called again in 1897, 1899 and 1900. But the number of participants decreased with each call. Once again Casellas, now yes, does not fall off the cliff in the diagnosis: "The laws of nature and society do not take long to impose themselves, and even the most animated girl with art concerns ends up paying the corresponding tribute to the demands of family life. Love, marriage, motherhood, these are the declared enemies of artistic hobbies; as soon as those three adversaries show up... bye-bye brushes, bye-bye easel, bye-bye color box!"

“Of those women we know nothing or we know very little. With few exceptions such as Visitación Ubach, Antònia Ferreras, Emília Coranty or Pepita Teixidor, it is almost impossible to keep track of those painters who dared to show their work in public. And there were more than a hundred!", points out the art historian Consol Oltra, for whom that still scarcely investigated episode was of paramount importance due to its symbolic and social value: "It was a full-fledged coming out of the closet", she says, " there was everything, teachers, students, with very unequal levels of quality, but without a doubt it marked a turning point”.

Oltra, author of the monograph Lluïsa Vidal. The gaze of a donut, the undertaking of an artist, follows their trail in Quan les donnas havien de pintar flors, a book in which she rescues “surviving” works by those pioneering artists who in many cases were not recognized even by their their own families, who got rid of them or abandoned them in a humid storage room – “those are the most unfortunate” – and who were condemned by circumstances to paint flowers. “Being called a flower painter was the worst of the worst,” Oltra argues, but they didn't have many other options. "At the Llotja they could only attend floral decoration classes and they were prohibited from attending courses with a natural nude model."

Antònia Ferreras (1873-1953), one of the few who never gave up her degree and always lived from her painting, was known as “the lady with the carnations”. Also a poet, she lived the ordeal of a marriage arranged with an abuser, from whom she separated before a notary in 1890. She had two children and until the end she was a committed woman who supported refugee women or prisoners of the Model during the War Civil.

Antònia Ferreras and the Salones Femeninos de la Parés also appear in the first chapters of Cent dues artistes, the first monographic book dedicated to Catalan women artists or those who have developed their careers in Catalonia. Published by Enciclopèdia Catalana on the Univers imprint, it includes texts by eighteen specialists under the direction of the researcher Elina Norandi. “There are many left out, of course, in the initial list there were 200, but in some cases it is difficult to find photographs of the works or the works themselves to photograph them. Because the big problem when we talk about women artists is that many have been erased, their works have been lost and therefore cannot be recovered. It is a perverse circle”, confirms Norandi, also curator of the Feresa de silenci exhibition. Les artistes from the magazine 'Feminal', which can be visited at the Museu d'Art de Girona until February 26. “Where are, for example, the works of Elvira Malagarriga that appear in the magazine? The nudes that we know she did but that she couldn't expose?

The Franco dictatorship played a determining role in this historical erasure of women artists, which in its desire to return to order managed to get many to return to their role as "angel of the home." "That did not happen in Europe, where the woman went out to occupy the public space because the men were at the front and, once their husbands returned, they refused to give it up."

In Catalonia there were very active artists such as Maria Freser, who was a great chronicler of the civil war, Soledad Martínez, who developed avant-garde work and ended up in exile in Mexico, or Carme Cortés, wife of the mayor of Barcelona, ​​Jaume Aguadé, who had to also undertake the path of exile with his daughter, Carme Aguadé, also a painter. “When the war ended, the same thing happened to women as to men: all distribution and sales channels were completely unstructured. When they started up again they were older or had died. And her work, almost always figurative, was underestimated at a time when abstraction dominated ”.

The book advances chronologically in its story until today, with artists such as Eulàlia Valldosera, Patricia Dauder, Mar Arza or Mabel Palacín, whose stories, although they already differ greatly from those of their grandmothers, are full of stones along the way. “Of the historical ones, the most prolific were Lluïsa Vidal and Lola Anglada, who decided to give up a family and dedicate themselves completely to their profession. Because even in the case of those who married artists, and continued to be linked to this world, they ended up giving in to a personal work. Teresa Lostau left art when she married Xavier Nogués and Manolita Piña hung up her brushes when she joined Joaquín Torres-García”. A colleague had warned him: “A painter's wife should not paint. If she does it better, she will be herself to the detriment of her husband. And if she does worse, she will embarrass him.