Carrie Mae Weems, the wish for something to happen

Happy, sexy, sad, bored, tired, drunk or flirty, but always in control of herself. 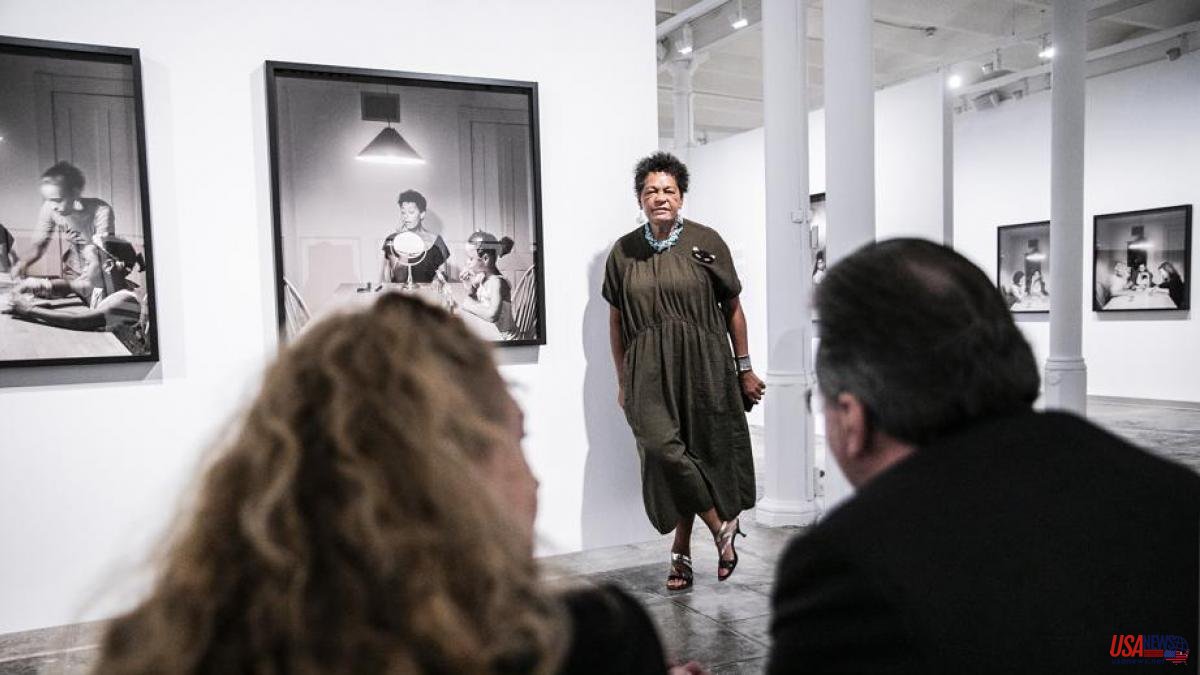 Happy, sexy, sad, bored, tired, drunk or flirty, but always in control of herself. In her best-known series, Kitchen Table, Carrie Mae Weems (Portland, Oregon, 1953) portrays herself doing homework with her daughter, putting on makeup together, eating with her husband, slumped over an empty bottle, chatting with her friends. friends or playing solitaire... With the only light of a lamp that hangs from the ceiling, the artist questions the preconceived ideas of what a woman has to be and what is expected of a man, the nature of the family, its ways of staying together and their falling apart, of the lies of monogamy...

They are like private vignettes of the life cycle of a romance that, as in almost all of his work, is fueled by a transformative longing. “In practically all of his work, the desire for something to happen reverberates and one question is repeated all the time: 'If you were given the opportunity to change history, what would you do?'”, explains Elvira Dyangani Ose, curator of the great retrospective, A great turn of the possible, which runs through three Barcelona spaces: the Mapfre Foundation's KBr, Foto Colectania and the Capella del Macba, of which Dyangani is director.

Carrie Mae Weems is one of the most outstanding and unique figures in contemporary photography. An artist, performer, videographer, woman and black who has a legion of devotees in her country (she appears as herself in the Spike Lee Netflix series She's Gotta Haveuna and Black Thought, the leader of The Roots, mentions her in one of the lyrics from his album Streams of Thought). Her great themes are race, gender and class, but she does not limit herself to documenting history but rather rewrites it, inserting into it those others who were ignored, erased, denigrated or forgotten. Freeing ourselves from our inherited beliefs and expectations, and trying to find "new models to live by".

"Many artists are public intellectuals, true generators of knowledge, but in Weems's work there is also a lot of poetry, a lot of beauty and a lot of popular wisdom in the way she responds to the African-American imaginary," says Dyangani Ose .

Kitchen table, together with And 22 million people very tired and very angry”, a series in which he addresses the struggle for democracy and freedom by oppressed people around the world, are shown in Foto Colectania, while in the Capella del Macba presents Lincoln, Lonnie and me, a hypnotic video installation that takes the form of a 19th century optical illusion, thanks to which, framed in a red curtain, appear, floating like spirits, protesters for civil rights, a boxer or the artist herself in a top hat or trying to dress up as a Playboy bunny.

But it is in the KBr where Weems's work –which warns us of the power of beauty to “modify our belief system”– reveals all the subtleties of personal freedom and its amazing ability to speak to us about our common humanity. Funny, emotional and revealing. Throughout a route in which a good part of the walls have been covered by wallpaper with a domestic appearance (plant motifs among which the figure of a black woman appears), we will see her again in many photographs, her alter ego or his muse, sometimes as a black silhouette with his back to the camera in front of the Louvre, the Guggenheim or the British, temples before which he suggests both a yearning for admission and a testimony of exclusion. A black woman or a female artist who has always struggled to simply be an artist.

During his student days, in 1978, he began Family, Photos and Stories, in which Weems, who had his daughter at the age of 16, gathered photographs of his own middle-class family in response to the 1965 Moynihan Report which claimed that African-American communities were bankrupt due to weak family structures.

In Colored People he turns his attention to beautiful African-American youth and children, whose faces he dyes in color, alluding to the convention that a person of color is better based on the color of their skin. But perhaps his most emblematic body of work is From Here I Saw What Happened and Wept (1995-96), in which he appropriated daguerreotypes of ancients commissioned by a Harvard scientist in 1850. Many of them were depicted nude or semi-nude, as if they were anthropological specimens. Weems reproduced the images, tinted them blood red, and circled the subjects so they appeared to be held captive by the lens. Harvard threatened to sue her for using images from her archive without permission; she would later end up buying her work.