Carmen Mola: "As much as they say, our novels don't even scratch what daily horror is" 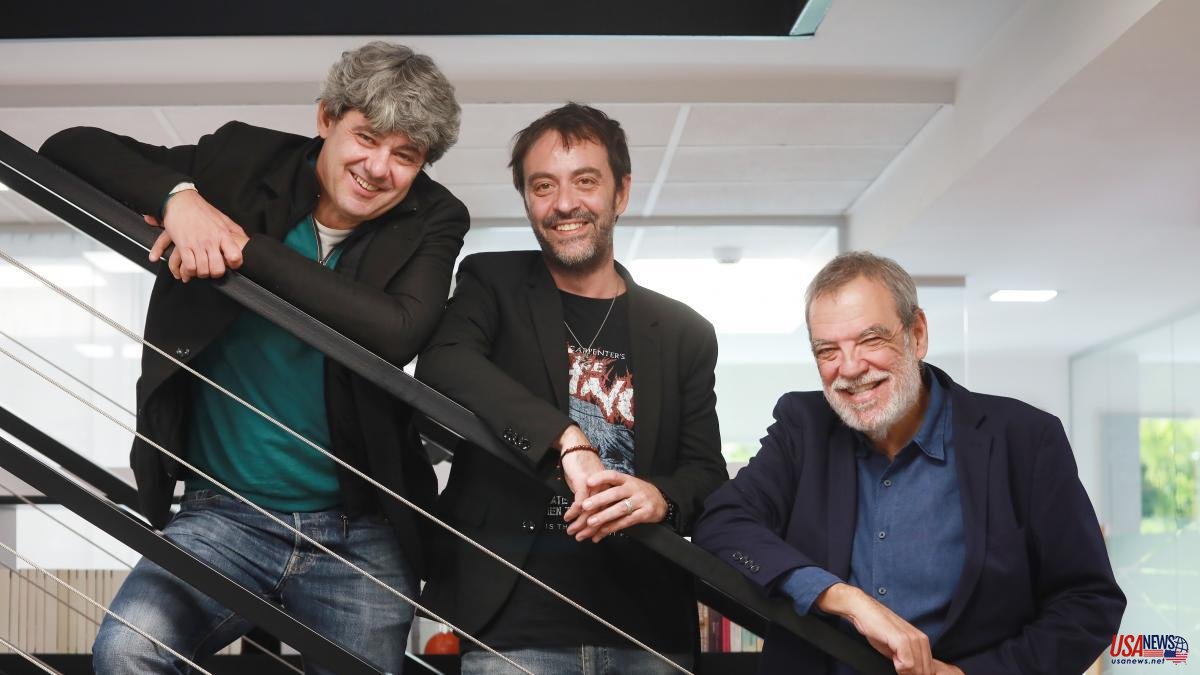 Carmen Mola returns. And she does it to the territory that launched her to fame, before winning the Planeta award and revealing -with no little controversy- that behind the pseudonym there was not a university professor hiding, but no less than three writers and screenwriters, Antonio Mercero, Agustín Martinez and Jorge Diaz. The three of them now return to their previous editorial, Alfaguara, to the territory opened up with The Gypsy Bride, with The Mothers, starring Inspector Elena Blanco and her complicated sentimental relationship with Sub-Inspector Zárate and, above all, with the shocking and macabre scenes that They hook their readers. A novel in which police corruption, mafias, Santeria and a lot of violence against women are mixed, with white slavery for prostitution and wombs for rent.

How does 'The Mothers' fit into the series that began with 'The Gypsy Bride'? And, how have they made Elena Blanco evolve?

Antonio Santos: It is a very clear continuation of Carmen Mola and the Elena Blanco saga. It has the characteristic markings, such as the shocking boot. The corpse that appears is a man with a fetus lodged inside. That sensationalism is very Carmen Mola. And then we pick up Elena Blanco at a point in her life with a very marked evolution from the cynicism and bitterness of the first deliveries. She lives changes: she is an abstemious woman, before an alcoholic, she has abandoned karaoke, she has abandoned sex with strangers and she is looking for a little light in her life within all that darkness in which she works and of which she is a little tired . And that light is to form a family, welcome someone, who is Nena, the character of the third installment, and at the same time try to have a relationship with Ángel Zárate. But these very noble and laudable purposes are going to be put in check with the case that he has to investigate, with Zárate's elusive attitude, highly connoted since the end of La Nena, he has terrible pangs of conscience for what he did in that novel, and for the things that are happening to him. All this virtue that Elena Blanco embodies at the beginning of the novel is going to be put in check and we will see if she achieves one of the two things that she has proposed, both or neither.

Jorge Díaz: It is the natural evolution, the evolution that we have had as well as Carmen Mola because although there are three of us and we have been writing the three of us from the beginning, we are learning. The novel is more reflective than the previous ones, it is more careful. We wanted to refine what we thought could be improved while keeping the features that have made it successful. The same evolution that Elena Blanco has had is being experienced by Carmen Mola, fortunately.

Jorge Santos: We have taken the grappa from Carmen Mola to drink it ourselves.

What is it that cannot be removed from Carmen Mola, what is the hook?

A.S.: There are only two commandments (laughs). In this promotion you have to get a couple of them more.

AM: Yes, there is an attempt to search for originality, to surprise the reader and generate a work that makes an impact. From there we can shoot anywhere. We make literature with reflective grounds, background theme and different layers but without forgetting that on the other side there are some readers who we want them to have a great time.

In 'Las madres', would you say that women and the violence of all kinds they suffer are at the center?

AS: Yes, without a doubt. Although already in the previous ones we look at what we believe is one of the most lacerating scourges of this society, which is violence against women. The usual victims of our novels are women and in this case, although the corpses are male, in reality the victims are also women. It is our theme of denunciation, not doing so would be not looking at reality when you are dedicating yourself to crime novels and you are making a portrait of evil in our time. Within that portrait it is impossible not to refer to the violence suffered by women.

J.D.: Yesterday I got home, I started reading and there were three murders of women, one in Benidorm, another in Palencia and another in Malaga. If you want to make a reflection of society, of the things that concern you, violence against women cannot be ignored. You see things like the police come to the house and find the two children with their mother dead. That awful. As much as they say Carmen Mola does not even scratch what daily horror is.

How do they get to white slavery and wombs for rent in this novel?

AM: We often start from an image when creating a novel, in this case a dead man with a fetus inside. And from there a million questions are displayed to which we are giving answers. In an almost natural way, it led us to a theme that underlies the entire novel, which is the female body as merchandise. As an object for sale with which you can negotiate and make a profit. It has multiple forms, prostitution and white slavery, which is what the novel starts with, but there are other ways of using the woman's body, such as the world of surrogate motherhood and wombs for rent. Almost all of us know people who have been able to resort to surrogate motherhood for thousands of reasons. Well, we bring a terrifying possibility, but unfortunately it is real, it is something that happens, because we have based ourselves on news from places like India, Ukraine, and we bring it to Madrid. Bringing that horror that seems distant and strange to us, and placing it next to us, generates a very important shock in the reader and makes him wonder things and ask himself questions.

How do you see the issue of wombs for rent?

A.S.: As there are three of us, it is difficult for us to have a thesis as a single author, they are very controversial topics. The basic writing strategy is to put the opinions in the mouth of the characters, not the narrator, to relieve us of that responsibility. We cannot apply a single view of life, it is the advantage and disadvantage of Carmen Mola. But the fact that the characters pronounce themselves categorically about it can give clues to the author's opinion. With prostitution for a long time and with surrogate motherhood we are witnessing a tremendous commodification of the woman's body. And constantly normalizing and whitewashing something that if you were to take a step back you would see it terrified. Here it is not legal, but nobody throws their hands up at the possibility of going to California for a surrogacy. Or Ukraine to do it a little more clandestinely. Nobody rips their clothes. It is amazing that the commodification of the female body does not generate more scandal.

AM: We have a very similar position in the background but with nuances. But it does fly over The mothers that sometimes we confuse the concept of what we have a right to, above what we have a right to certain things. we have the right that there is a hamburger for one euro. Voucher. But to get it, what price are we paying to other people? Or a dress at three euros. We don't want to know. We just think we have a right to own those things. In Las madres, both sides are played, the mafia and the consumer's side.

A.S.: We do not make a doctrinal novel, we set the theme and launch the questions without necessarily giving the answers.

Is progress being made in violence against women or will this always be part of gender inequality?

A.S.: Progress is being made in social awareness, at least on the issue of prostitution. Surrogate wombs here are not legal. Prostitution is another singer. There are advances in the awareness of the punter, who at least has the feeling that he is doing something bad, reprehensible. But I am not optimistic that prostitution will disappear. It will never go away and the seedy businesses that always flourish around it will continue.

Do you have the will to make an in-depth portrait of black Madrid? They even talk about the shantytowns that are disappearing, where there was marketing, they seem to trace a black geography of Madrid.

JD: It's voluntary. We liked that the person is one more character in the novel, that marks the life of the protagonists, the antagonists. We are all three from Madrid, one born and two adopted, and those of us who decided to be from Madrid are more from Madrid than anyone else, and we like to reflect the city. In all the novels of Carmen Mola we have wanted to make a portrait of Madrid and not of the tourist one, of the Avenida de la Luz, the Puerta de Alcalá and the Paseo del Prado, but of the Ventorro de la Puñalá, the Barranquillas, the Cordobés ranch , the Marconi neighborhood, of that which is also Madrid, very hard, but despite everything we find it somewhat attractive. In many of these places, urbanizations with swimming pools and paddle tennis are now being built.

The controversy when revealing your identity with the Planeta award, how have you handled it? There are people who believed that once they were revealed, Carmen Mola would be over. Apparently it goes on.

J.D.: It was always known who the Beatles were.

AM: After a year I think the controversy has remained in the interviews. There was a week when people got excited on Twitter, which is a very small site. We have made a lot of presentations throughout Spain and we have not found more than love. The controversy did not have much travel. And people have understood that the proposal we made was one of collective creation, the great difference of Carmen Mola, three authors who, when they come together, create something different. We are already used to music. That's what Jorge said, three get together because we all knew that Ringo didn't do anything with the Beatles, and they make records. Or some artists and they set up the Chronicle Team. That was the proposal, a connection of talents in which something different emerges. And as such it makes a lot of sense that we continue to be Carmen Mola.

AS: I like it. It has personality, strength, the necessary darkness that the book has and it has been very well received. We are very happy.

Carmen Mola, where will you continue?