The Dakar 2023 has been extremely complicated for Carlos Sainz. 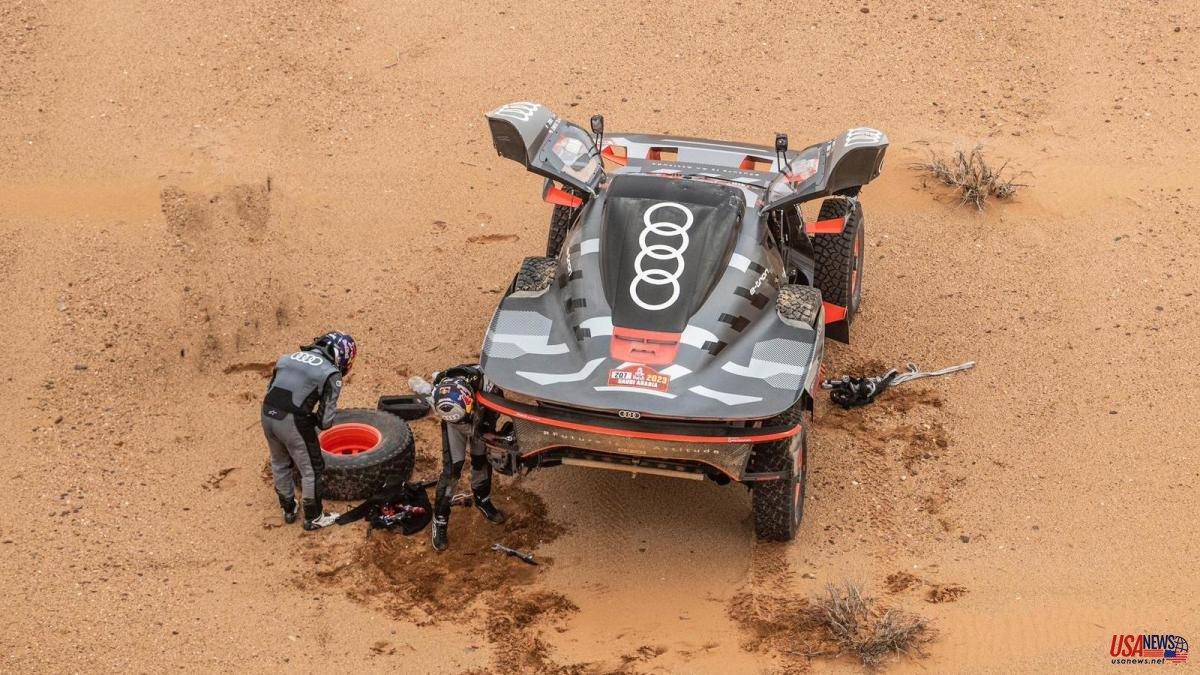 The Dakar 2023 has been extremely complicated for Carlos Sainz. The Madrid driver, leader until today, suffered two mechanical problems that caused him to lose 35 minutes with Nasser al Attiyah when the third stage had to be stopped at kilometer 377 due to bad weather and the terrain in bad conditions due to the rains. The Qatari, 13th of the day, takes the lead in cars. Sainz falls to 8th place overall, after more than half an hour.

The third stage, between Al-Ula and Ha'il, of 447 km of special, started well for Sainz, who led with 2m12 over Al Attiyah who had to open the track as the winner of the previous day. The Spaniard made the most of his Audi and managed to accumulate an advantage of 7m17s at kilometer 184. The provisional lead of the stage was being debated by Al Rajhi and Chichérit.

However, the evils would not take long to visit Sainz. At kilometer 213, the Spaniard had to stop for the first time due to a puncture in the left rear wheel that caused him to lose 40 minutes standing still, since he had difficulties with the hydraulic jack. So Al-Attiyah, De Villers, Al Rahji, Peterhansel and Chichérit overtook the Spaniard.

The loss of time with Al-Attiyah rose to 26m30s at the checkpoint (km 240); a stick for the Spanish. Luckily for Sainz, the Qatari was not riding well and was more than 12 minutes behind the provisional leader, Henk Lategan (km 147).

After resuming the march once the problem was solved, Sainz tried to cut the deficit with the Qatari. At the next checkpoint, the one at kilometer 288, he scratched him about 5 minutes, from being at 26m30s to being at 20m53s, with 160km to go.

However, a second stoppage for another puncture and problems getting the wheel off kept Sainz detained for 15 minutes, so the pursuit of Al-Attiyah fell apart. The man from Madrid fell to 50th place and the Qatari escaped from 36 minutes at kilometer 335, shortly before the stoppage of the stage due to bad weather.

The organizers decided to conclude the stage at the checkpoint at km 377 due to bad weather, given the impossibility of flying for the helicopters.

Sainz was still able to cut Al-Attiyah by a minute in those 35 kilometers before the stoppage, so he closed the stage in 44th place, 35m24s behind the Qatari; that is to say, in the general he falls 33m11s from the current leader.

The victory of the stage went to the Frenchman Guerlain Chichérit (Hunter BRX), ahead of Hategan (Toyota) and Terranova (Hunter BRX).

Laia Sanz, after her odyssey on stage 2, had a very good day with 30th place (33m behind the winner), which puts her back in 59th provisional position overall.

For their part, Carlos Checa and Marc Solà signed 24th place, while Isidre Esteve and Txema Villalobos were 33rd, just behind Sébastien Loeb, who experienced another ordeal.

Nasser Al-Attiyah takes command of the race with 13m20s over the Saudi Al Rajhi (Toyota), 20m45s over the third, Stéphane Peterhansel (Audi), who seemed to run out of options after losing more than half an hour on stage 2, and Sainz He appears eighth, 33m11s behind the Qatari, with a very complicated rally, but not impossible.

The third time was the charm for the Australian Daniel Sanders (Gas Gas), who took the victory of the third stage, shortened at kilometer 377, like the cars, due to bad weather. The Gas Gas rider, who already won the first stage (but was penalized for speeding) and gave victory to Klein in the second, this time he was the fastest from the first checkpoint (km 47) against Skyler Hawes (Husqvarna), who was second, ahead of Klein (KTM).

Sanders is now the new overall leader, with 4m04s over Klein and 6m53s over Kevin Benavides (KTM).

Joan Barreda, from Castellón, with his private Honda, was running with a broken toe (hitting himself with a stone in the second stage) and finished the stage 5th, 11m29s behind Sanders. In the overall he drops from 3rd to 5th, 10m37s behind the Australian.