After 70 years preparing for the moment, Carlos III has been officially proclaimed this Saturday king of the United Kingdom and fourteen Commonwealth countries. 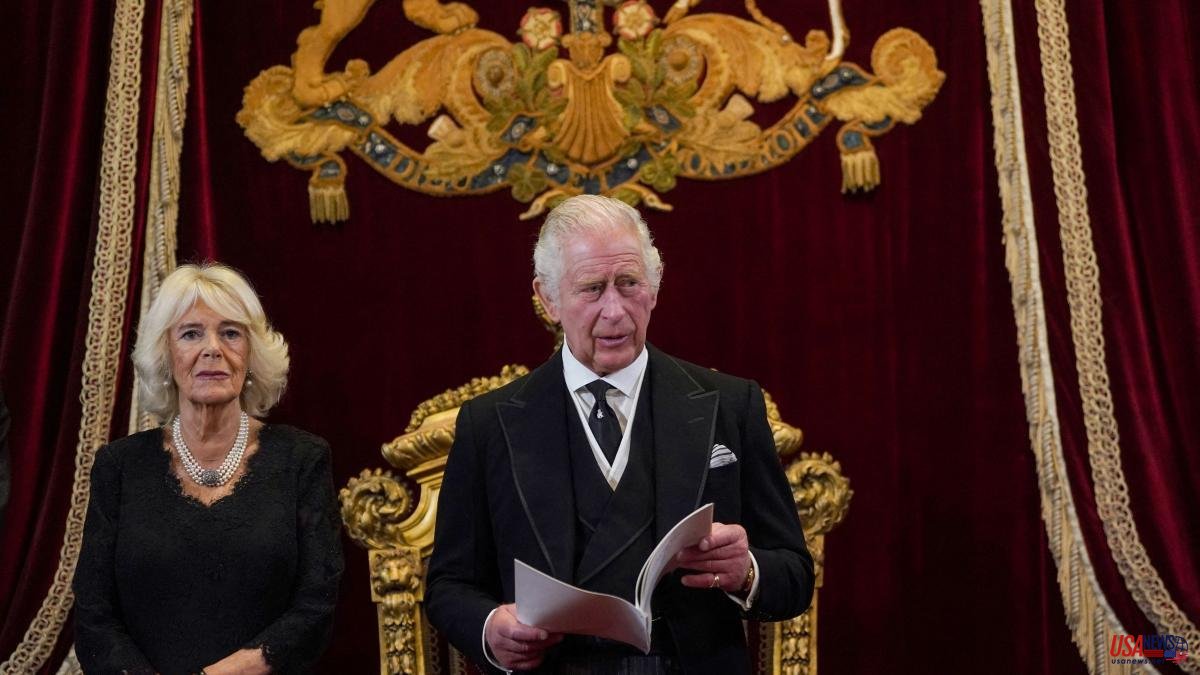 After 70 years preparing for the moment, Carlos III has been officially proclaimed this Saturday king of the United Kingdom and fourteen Commonwealth countries. In a ceremony full of British formalism and symbolism held at the St. James Palace, Carlos III has promised to follow the legacy of Queen Elizabeth II, who died last Thursday at the age of 96.

"I am very aware of the heritage and the duties and great responsibilities of the reign that are now passed on to me," he assured, while promising to make an effort "to follow the inspiring example" of his mother when defending the Government. constitutional and seek peace, harmony and prosperity in all the territories that are part of the United Kingdom. The monarch has been convinced that, if he does so, "the affection and loyalty of the people" will support him to be their sovereign, guided by "his elected parliament" and with "the support" of the queen consort, his wife Camila.

These words are part of a series of oaths and declarations that the King has pronounced after the Adhesion Council, made up of high-ranking political officials and officials who advise the monarch, officially confirmed Carlos Felipe Arturo Jorge as the new monarch Carlos III. “God save the king”, those attending the act have shouted, a proclamation that has been heard on several occasions during the ceremony. For example, from the courtyard balcony of London's St. James's Palace, from where the military office known as the Garter King of Arms has read "the first and foremost Proclamation", culminating in a fanfare and military parade.

The same text that the Adhesion Council had pronounced shortly before and in which the death of Isabel II and her succession by Carlos III is formally confirmed, although in reality the heir automatically replaced her after her death last Thursday. "The Lords Spiritual and Temporal of this Realm, and Members of the House of Commons together with other Members of Her Late Majesty's Privy Council and Representatives of the Realms and Territories, Aldermen, Citizens of London and others, with one voice and With the consent of our tongue and heart, we publish and proclaim that Prince Carlos Felipe Arturo Jorge has now become, due to the death of our sovereign of happy memory, our only legitimate and happy lord, Carlos III," the text reads. The declaration then promises "faith and obedience with humble affection", wishing him a long reign.

Thus, in the first part of the ceremony, the accession council confirmed the new title of Carlos III without his presence. An act televised for the first time since the last time it took place was in 1952, when Queen Elizabeth II assumed the throne. After announcing the death of the queen and proclaiming her successor, the president of the Council, Penny Mordaunt, has ordered the members of this body to go to a separate room to meet with the new king.

While Carlos III assumes his new duties, preparations continue for the queen's state funeral. Although a date has not yet been officially confirmed, it is expected to be held on September 19 and that the day of Queen Elizabeth II's funeral will be declared a national holiday in the United Kingdom.