Carlos Carrizosa: “I am fascinated by extinct creatures”

Carlos Carrizosa (Barcelona, ​​1964) became fond of fossils as a child and immersed himself fully in paleontology books. 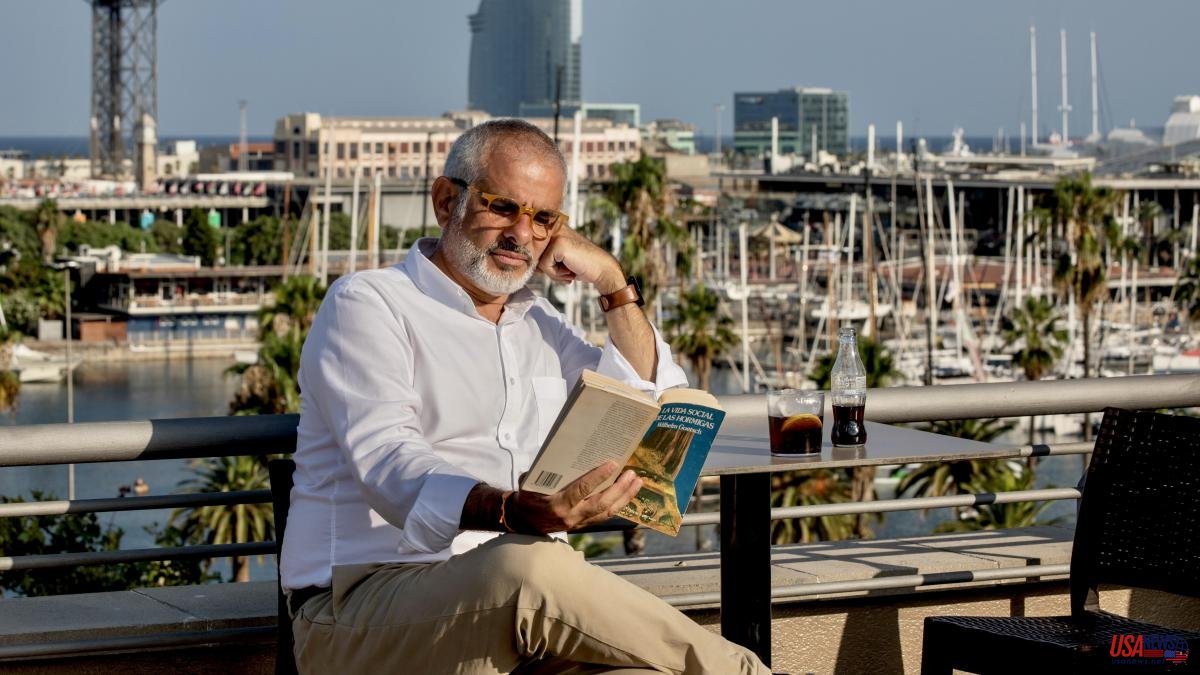 Carlos Carrizosa (Barcelona, ​​1964) became fond of fossils as a child and immersed himself fully in paleontology books. Over the years that interest led to natural history, in a broad sense, and now he entertains himself by seeing how a queen and the rest of the colony manage in the anthill he has at home. He chooses to portray himself on the terrace of the Duquesa Suites hotel in Barcelona, ​​with the sea behind him.

And that fondness for fossils?

I started as a child, and you get into it, it's the story of life and where we come from, of human nature, of animals, diversity. In the end it is a naturalistic explanation of what we are and where we are, of human evolution and what distinguishes us from primates, that has interested me for many years.

Those creatures from millions of years ago are fascinating, it's like the immensity of the cosmos...

It is that, the astonishment, the fascination for these extinct creatures, for what the world has been since the Earth was formed 4,500 million years ago. You think that 3,800 million years ago the first forms of life and that the human species has barely been 180,000 years, the sapiens, on Earth. Except for the last 5,000 years, everything else is the story of a suffering and silent humanity about which we know nothing.

And from one book to another?

Not only. When I was practicing law and had small children, we would go on 4x4 trips to the mountains and look for fossils, we would talk about the history of life, we were in Atapuerca, it was like a family hobby. All that was long before politics.

They were educational outings.

It is as if the landscape were telling you a story, because you go to the areas where there were coal mines in Catalonia, you find fossil leaves there and it leads you to be interested in botanical evolution and everything is like a great mosaic, which leads you to geology , the evolution of the climate on Earth, climate change, is an inexhaustible occupation. And now I have an anthill.

Natural history is a family hobby, and my children got the bug to buy an anthill, and knowing that I am a geek of all this, they convinced me to buy one myself. There are 90x100 millimeters, you put a queen ant and four nurse ants in there and they begin to rear their larvae and it is as if you had them in a house with a patio, on a human scale of almost 600 m2. You give them protein, you give them water to drink, and you watch as the wet nurses take care of the queen. The ants transmit the proteins that you put to them through their mouths and they give it to the queen. And all that with a magnifying glass you can see.

So he's there watching them go up and down.

You take a look to see what they do, how they forage in the part that is dedicated to looking for food and drinking, and it's very funny.

I was thinking that society also watches the political class very closely, there is a very severe scrutiny.

Yes, and the politician then dumps it into the anthill to get even...

There has to be control over politicians, but the consequence is that everything they say and do ends up being predictable, don't you think?

Yes, and the politically correct dictatorship bothers me more and more. If a politician says something that is not what is accepted as normal, he is going to be lynched on the networks, or if you have a way of life that is not what is expected, it seems that they are going to crucify you. I think that politicians should be the first to shake off a bit of that dictatorship that the networks have generated, over politicians but also over any other public figure, and the circumstances that occur. And as a lawyer it disgusts me a bit, I like that we are free and have freedom of expression without fear of being stoned. The guarantees in the modern State are given by a trial, respecting the rights.

In politics gestures are important. If people only see how they disqualify each other, they believe that the opponents don't even talk to each other.

Yes, they ask us if we all talk to everyone. But politics could not be done without a minimum of respect and cordiality in dealings.

He was a criminal defense attorney before entering politics.

Yes, 23 years. With criminal law you deal with people who have committed crimes, sometimes serious, but they are much more than the crime, and as a lawyer I have tried to ensure that they have what corresponds to them and that their rights are respected, the presumption of innocence, and if there are sentence, which conforms to the law. And I also liked knowing the human facet of him, who has a prison knows quite a lot about the functioning of the human soul, and it's nice.

How will your political experience influence you when you go back to work as a lawyer?

Sometimes we lawyers are excessively technical, and surely there are communication issues that are learned in politics that can be very good to practice in court, and I am convinced that this would make me a better lawyer.

Are you going on vacation?

I will go to the islands for a few days, with my children, a few days of sea, and sun and beaches, and culture..., and food.

What reading will it take?

Surely, Moby Dick is a great work, which I have read on several occasions, it makes you think, and you find rereadings of it.

I have the version edited by Valdemar, illustrated by Rockwell Kent, and on my kindle I have the version of Penguin Classics, a great translation, and if I can I'll take the hardcover one and, if not, the other one.

I studied pure letters, Latin and Greek, and I already liked the classical world then, but I didn't start reading the Latin and Greek classics until I was thirty years old, and then I have derived readings on the formation of the first civilizations, Mesopotamia, Egypt..., is that one thing leads to another.

But he always ends up looking back.

They are recurring hobbies, but yes, in the end it is all about diving into the remote past and understanding man, society, understanding what we are and why we do the things we do, and that has always been a curiosity of mine, since I was young.