Brussels calculates that the energy tax will raise 140,000 million

Pressured to offer short- and medium-term responses to the energy crisis that is shaking the continent, the President of the European Commission, Ursula von der Leyen, took advantage of her speech on the State of the Union on Wednesday to present the main lines of her plan to reduce gas and electricity prices as well as an estimate of what these measures could supposedly raise to help governments support consumers. 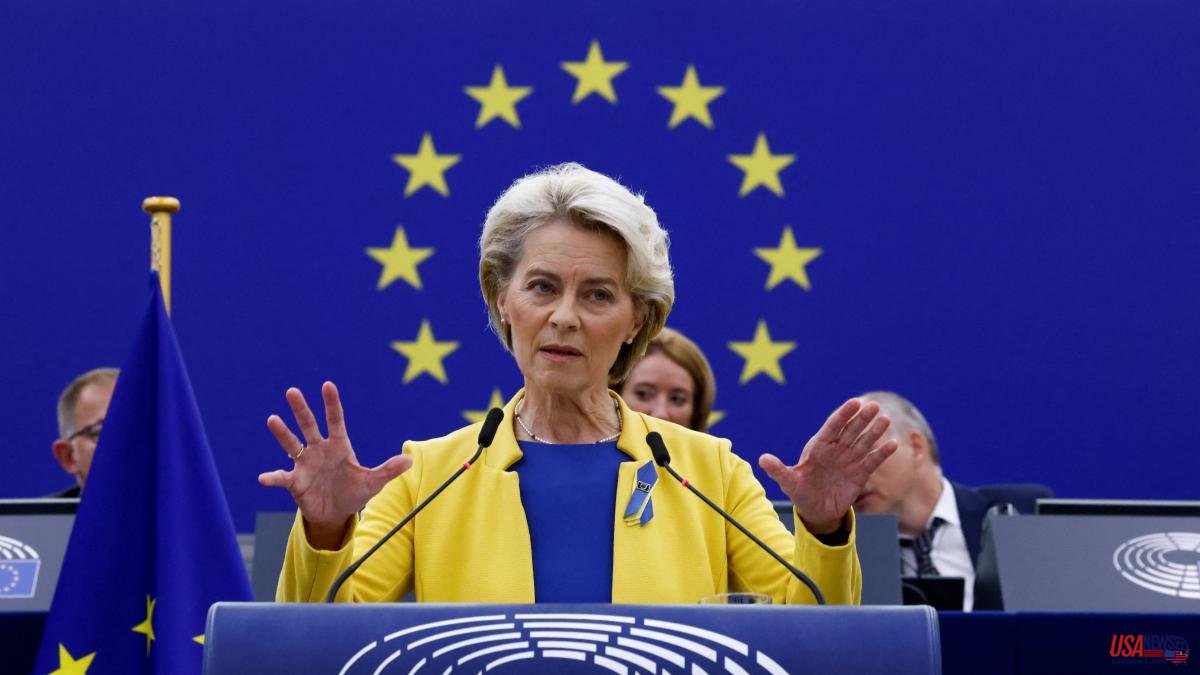 Pressured to offer short- and medium-term responses to the energy crisis that is shaking the continent, the President of the European Commission, Ursula von der Leyen, took advantage of her speech on the State of the Union on Wednesday to present the main lines of her plan to reduce gas and electricity prices as well as an estimate of what these measures could supposedly raise to help governments support consumers.

"In these times we live in, it cannot be that some obtain extraordinary and unprecedented benefits thanks to the war and at the expense of consumers," Von der Leyen criticized before the plenary session of the European Parliament in Strasbourg, who advocated that they be shared and channeled towards “those who need them most”. His proposal to put a limit on the profits of companies that generate electricity from renewable sources, nuclear energy or coal, in addition to a "solidarity contribution" to oil and gas companies, will allow the collection of "more than 140,000 million euros", assured.

Brussels proposes, on the one hand, to set a maximum of 180 euros per megawatt hour as the limit that inframarginal energy sources, those that are cheaper than gas, can charge consumers. The experience of Spain with its similar initiative to limit the profits of electricity companies, which sets the cap on extraordinary profits at 67 euros per megawatt hour, is that the market adjusts, while prices fall but not all that is expected is collected .

On the other hand, the European Commission proposes to retain 33% of the profits obtained in 2022 by the rest of the energy companies, a measure that, based on its temporary and extraordinary nature, deny that it is a tax. The Commission will assess whether the tax that Spain is currently processing, which would levy a 1.2% rate on the turnover of electricity, gas and oil companies, is compatible with its proposal. If the objective, design and results are similar, Spain could maintain its tax.

The same applies to the Iberian mechanism, the exception negotiated by the governments of Spain and Portugal that has allowed the price of electricity to be decoupled from that of gas to prevent its high cost from contaminating the rest of the market. Although the European governments have asked Von der Leyen to propose possible ways to cap the price of gas, there is no agreement between the community technicians, the college of commissioners or the Council on how to move forward. Hence, this Wednesday did not present anything about it.

The Commission confirmed this Wednesday that Spain and Portugal will be able to maintain their system as it serves the same purpose. After three months in force, the Vice President for the Ecological Transition, Teresa Ribera, announced in the plenary session of Congress that she has allowed families and companies to save 2,300 million euros on their electricity bills. The mechanism, endorsed by Brussels, will be in force until at least May 2023.

Von der Leyen also insisted on his proposal to agree on a binding target to reduce electricity consumption by 5% in peak hours, apart from 10% of the total, an approach that has few allies in the Council, which prefers voluntary measures. All these initiatives are urgently needed to resolve in the short term the problems caused by the energy war declared by the Kremlin.

Von der Leyen admitted on Wednesday that the European electricity market "does not work" and announced that a "deep and comprehensive" reform is necessary. It is quite an acknowledgment of the seriousness of the problem that Europe finds itself facing, an absent topic –except for a mention of the car and the electric scooter– in his speech last year despite the SOS launched by Spain and Portugal. The German now admits that Putin's energy war against Europe has not started now but last year.