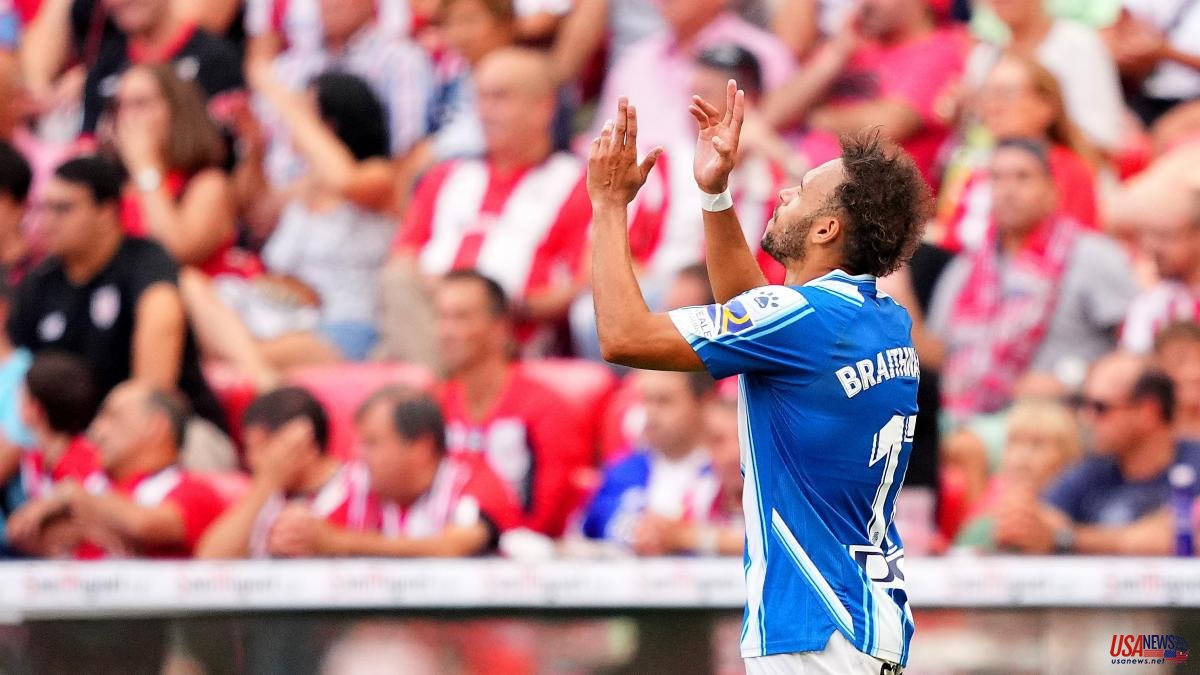 Diego Martínez spreads an enthusiasm seldom savored by Espanyolism. His ability to squeeze and bring out the best talents of his players is already a source of veneration in Cornellà. Right now that is the best, perhaps the only, alibi for a club that has once again disappointed the fans with erratic sports planning, crowned by an incomprehensible handling of the exit request of its best player. Chen's seventh project started three weeks ago, but it was against Athletic, in San Mamés, and after the market closed when he could be judged serenely. And what was evident again is that the staff is courageous, but excessively short. That volunteerism is not enough to generate football. The team is quarrelsome, daring, rebellious, but the shortcomings are obvious. In the form of both defensive and offensive talent. Against Athletic the injuries of Edu Expósito, Keidi Bare, Calero and Lazo were added. Simo (18) and Omar (17) had to debut. And as if that were not enough, De Tomás still acts as a distorting element. Like that annoying beep that never goes away and doesn't allow you to move forward. Well, despite all this, Espanyol managed to win thanks to a goal, a magnificent goal, by Martin Braithwaite. The new star of this team, with permission from Darder.

He crossed the Diagonal last Thursday and for that reason, and even before dressing up short, he became a parakeet idol. Three days later he was crowned with gold letters by scoring a fundamental goal in San Mamés. The victory point. But also the one that serves to give peace of mind to a wounded project at the beginning of the season. Espanyol never deserved the win. But this team has soul, spirit. Always compete. It's not enough for too much, it's true. But hand in hand with Diego Martínez, he is determined to contradict all football laws. In Vigo he already miraculously equalized and against Madrid he even deserved it. San Mamés is a new step. Saint Braithwaite made it possible.

The coach from Vigo did not hesitate and made both the Dane and Álvaro Fernández debut, who stopped the ones that were worth it and also the ones that were not. There is no time to lose. Both must adapt to the mechanisms of the team and in the case of the Dane, he must acquire playing time in his new role as a winger. But he barely had a leading role, because during the first half the parakeet team dedicated itself to defending. To try to survive against the avalanches of an Athletic with personality and capacity to arrive with many men. Vini Souza multiplied to cover the Muniain, Sancet and Williams jr. Arrivals were constant, especially on the left, where Berenguer drove Óscar Gil crazy. In one of those runs, the winger crossed to the far post and Williams, with Álvaro Fernández overtaken and with an empty goal, did not connect well with the ball. Athletic dominated but the goal resisted. It is evident that this team suffers in that aspect. And Espanyol tried to take advantage of this by grouping up in defense. On the verge of half-time, Berenguer sent a shot to the crossbar that shook San Mamés due to his precision and violence. The parakeet team was saved again.

Where the shortcomings of this Espanyol are most noticeable is in construction. Ball and grouchy. That was the most sought after strategy by centre-backs, full-backs and even some midfielders. Only Darder puts pause and some clairvoyance, but very few accompany him. It's not that they don't want to, it's that they don't get it. So easy and cruel at the same time. However, only Darder is much against anyone. And from his boots came a magnificent deep pass for Joselu to score the first. The Galician finished off with a volley, with power, but deflected. That was the best and almost only chance for Espanyol. Because the rest was running and suffering. And suffer and run.

And so Espanyol extended the match. Without conceding too much, and without ceasing to be vertical in search of a miracle. When Keidi was injured ten minutes after entering the field, Martínez looked to the bench and only found two players with more than ten games in the First Division, Melamed and Dani Gómez. He opted however to make Simo debut and play with a defense of five. Calero also broke. And also, in the end, Lazo. And Athletic persisted, although with less and less faith. There Braihwaite appeared in a counterattack to skilfully leave two rivals and beat Unai Simón. The celebration of the bench explains the importance of this goal. From this first triumph that gives peace of mind. Although only for now.

Incidents: Match of the fourth day of LaLiga played in San Mamés with 41,574 fans in the stands. The academy players Ane Elexpuru, Clara Pinedo, Maite Zubieta and Amaia Martínez, European champions under 19 and, the first three, of the world under 20, performed the kick-off.