A goal from Brais Méndez in the first half allowed Real Sociedad to add their second consecutive victory away from home in the League (0-1) against an inferior and impotent Elche that continues without knowing what it means to win this season. 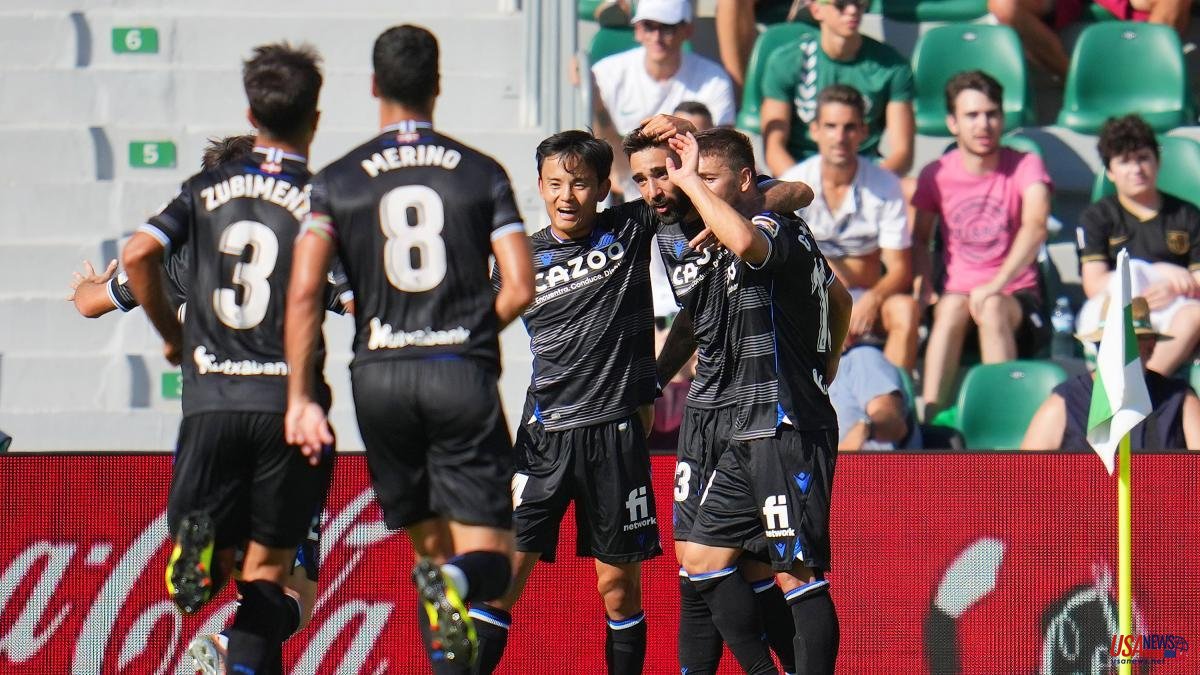 A goal from Brais Méndez in the first half allowed Real Sociedad to add their second consecutive victory away from home in the League (0-1) against an inferior and impotent Elche that continues without knowing what it means to win this season.

Imanol Alguacil's team was far superior to their rival, especially in the first half, in which, in addition to scoring, they wasted several clear chances, including a penalty shot by Mikel Merino. In the second half the game was balanced and Elche, in which only Álex Collado shone, looked for a draw, although he barely made Remiro suffer.

From the first moment, Real imposed their dynamic game against an Elche incapable of discussing possession of the ball. Despite the visitor's dominance, Collado, with his classic start from the flank towards the center, was the first to go around the goal with a shot that Remiro saved.

Kubo answered seconds later in the other area with a shot close to a stick that Badía caught. The superiority of Real ended up materializing in the 19th minute, when Brais took advantage of a pass from Zubimendi to split the defense from Elche and beat the Catalan goalkeeper on his way out.

The goal destroyed Elche and encouraged Real, who played at will. Silva, Kubo, Brais and Cho began to mix, combine and create spaces impossible to detect for the Elche defense, fragile on the sides. After half an hour of play, Cho, a nightmare in space, again exposed the local defense, but when he was about to finish off the goal from inside the area he was shot down by Mojica.

Merino, who was taking his first penalty with Real, opted for the Panenka style, but Badía did not bite and stood up to catch the ball effortlessly. The action, however, did not discourage Real, who continued having fun on the field and drawing walls and diagonals behind the Elche midfielders.

Just before the break and in the midst of a San Sebastian gale, Mojica avoided the goal by anticipating Le Normand and Cho by millimeters at the far post, who were waiting for the ball to score at will. Francisco, Elche's coach, decided to intervene in the game and replaced Lirola and Gumbau with Palacios and Guti at half-time, but La Real continued to do their thing and in the first few minutes they already generated two scoring chances from the boots of Brais and Silva .

Collado, Elche's only offensive asset, woke up his team with a cross shot and shortly after it was Ponce who was unable to capitalize on a Real turnover. Elche, who were encouraged by Boyé and Milla, came close to equalizing with a shot from Guti, again after an assist from Collado, who Remiro took off with reflexes.

Real Sociedad lost finesse with the ball and the match leveled out, although Alguacil's team was once again close to scoring with a shot from Karrikaburu. Elche did not stop trying, but without precision or success in their offensive game against a rival who knew how to defend themselves with the ball and who did not even feel seriously threatened with a draw in the final minutes.

Referee: Iglesias Villanueva (Galician Committee). He showed a yellow card to Gumbau, Tete Morente and Mojica for Elche and Merino, Zubeldia and Karrikaburu for Real Sociedad.

Incidents: Match corresponding to the third day of LaLiga Santander played at the Martínez Valero stadium before 22,656 spectators.