In Baščaršija, the old Ottoman quarter of Sarajevo, shell casings are sold as tourist souvenirs. 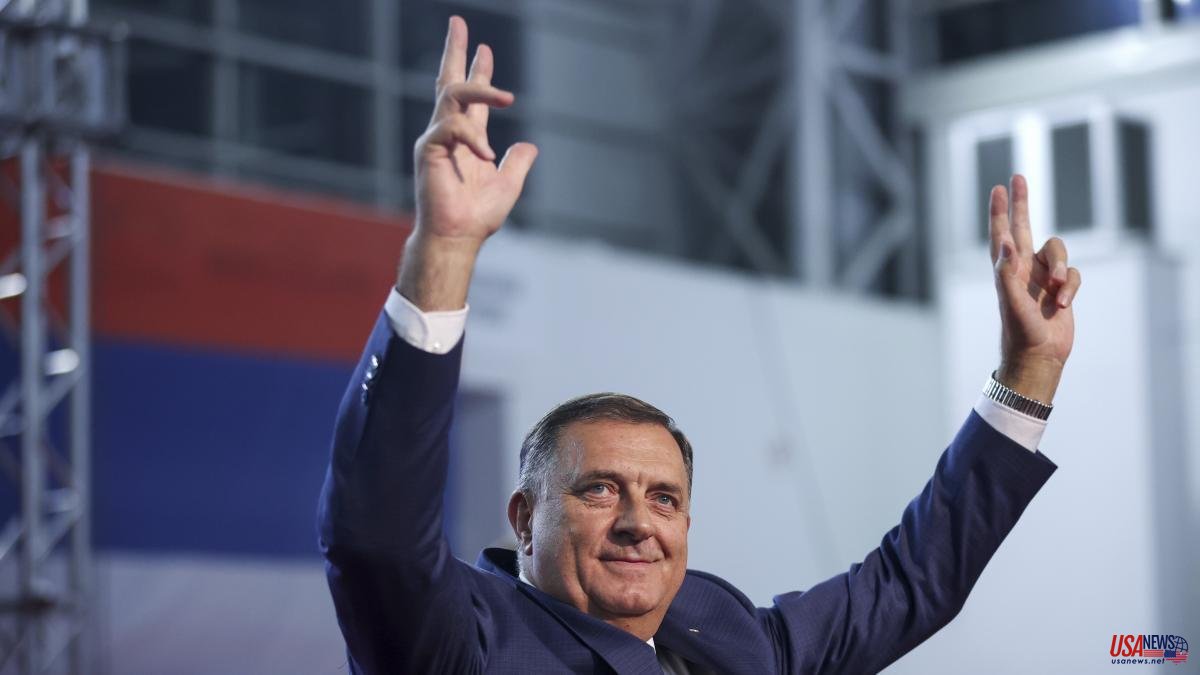 In Baščaršija, the old Ottoman quarter of Sarajevo, shell casings are sold as tourist souvenirs. Keychains, pens, even figurines in the shape of a tank or plane are made. “The ones that shine are fake, made in China; the real ones are the ones that are dirty and have traces of gunpowder”, specifies one of the shopkeepers on Calle del Cobre.

Bosnia and Herzegovina has spent three decades trying to turn the page on a war that left more than 100,000 victims between 1992 and 1995 and that pitted Serbs, Croats and Bosnian-Muslims against each other. Since then, some of the city's facades have been repainted, but most retain the misfires of Serbian snipers. Yoga classes are now advertised in one of those battered buildings. In another, various electoral posters from a dozen parties cover the holes.

Today the ninth elections are being held since the signing of the Dayton peace accords, in which the current political structure was established: two entities, one for Serbs and the other for Croats and Muslims; as well as three presidents, one representing each group. This system, protected by the international community, "seeked to represent all the parties involved in the conflict, but has ended up perpetuating ethnic divisions," says Semir Mujkic, editor of the Balkan Investigative Reporting Network (BIRN), the main observatory of historical memory. and monitoring of the extreme right in the region.

These fractures are especially visible in the capital. Across the Miljaka River, in East Sarajevo, half a thousand people attend an election rally in Serbia Square.

This neighborhood is part of Republika Srpska, the autonomous entity that comprises half of the country's territory. Its president since 2010, Milorad Dodik, enters the pavilion as a favorite in the polls.

A cigarette dealer during the war, he began his political career in the 2000s with a moderate discourse, even open to the idea of ​​Europe. But his last years in power have been characterized by a nationalist drift and denial of the war crimes committed by the Serbs. His biggest project is, according to himself, "the independence of Republika Srpska with some kind of state link with Serbia."

But for that, you need allies. "We have the territory, the support of the population and we have an effective executive and legislative power," he replied to La Vanguardia. "We just need international recognition," she adds. At that same election rally, Dodik brags about his good relations with China, Hungary and especially with Vladimir Putin, whom he directly calls "friend".

Russia is behind the main economic investments in the country and has offered unconditional support for a possible secession. Just this week, the Kremlin and Gazprom gave their go-ahead to a gas pipeline project with Serbia and the construction of various gas-fired power plants in the Republika Srpska. In return, Dodik has used his vote in the tripartite presidency to block all Bosnia and Herzegovina sanctions against Russia since the start of the Ukraine invasion. "Dodik is waiting for the right moment," says Mujkic. The war gave him momentum, but the recent defeats of the Russian army have caused him to suspend, for the time being, steps towards independence.

Meanwhile, the rhetoric of Serb nationalists strikes fear in the Federation of Bosnia and Herzegovina, the country's other political entity. More diverse than Republika Srpska, with 70% Muslims, 10% Croats and 20% other minorities, it has major infighting. Croats in the south of the country seek to change the electoral law to gain representation, while Muslims accuse them of discrimination and Islamophobia.

Presidential candidates have to declare by law which of the three main ethnic groups they belong to, which almost completely eliminates political ideologies and perpetuates the division. “We have a feeling that nothing ever changes in Bosnia,” explains Agan, a national television technician who was seven years old when the siege of Sarajevo began.

Like him, many other young people who did not participate in the conflict feel a great disaffection for politics, while suffering the consequences of inflation with salaries that do not even reach €600. For these elections, participation is expected to be around 50%, despite the thousands of electoral posters that are plastered throughout the country.

This twisted system, which not even the citizens themselves understand, is one of the main obstacles to accessing the European Union. Bosnia and Herzegovina is expected to apply for candidate status again after Ukraine and Moldova did so a few months ago. However, the country "is unable to apply the necessary economic and political reforms, to which is added high levels of corruption in all administrations," says Mujkic. "There is no real will either in Brussels or in Sarajevo," he adds.

In this sense, the Russian invasion has awakened solidarity among the Bosnians, who see shadows of Sarajevo in Kyiv and of Srebrenica in Bucha. But it also revives a certain resentment towards Europe and the Western powers. "We support Ukraine, of course, but it bothers us that they send millions of dollars worth of weapons to them, while the Bosnian army sent ten men with only one gun," criticizes Agan.

The only European promise left to the Bosnians is to emigrate. Amina was born in Tuzla, central Bosnia, in 1995. In the same year, her father was killed by the Serbs. She has lived since the age of five in Linz, Austria. "There is a huge Balkan community in the diaspora," she says via video call. "Sometimes those who are out show a lot more hate than those who stay," she adds.

He confesses that he does not follow the news very much, and that nothing has been reported about the current elections. His main link to Bosnia is his paternal grandmother, Djuljia, one of the few Muslim women who returned to present-day Republika Srpska after the war. She lives in Krasan Poljie, ten minutes from the Srebrenica memorial, where her son, Amina's father, is buried.

“I am glad that she has been able to study and live in a rich and peaceful country,” she explains as she walks among the tombs. She is angry that politicians like Dodik deny, explicitly or implicitly, what happened during the war. “I have neighbors who once pointed out Muslim families in my town and who today say that nothing happened,” she explains.

The villages surrounding Srbrenica are the last stronghold of Bosnians in the Serbian region. In a hypothetical independence, this would become the hottest point next to the Brčko district, a small strip of neutral territory designated by the peace agreements that divides Republika Srpska in two.

The threat of ethnic conflict in the short term is unlikely, although a resurgence of nationalism is worrying, especially among teens born after Dayton. "People don't want the war to come back, but the hatred is still there," explains Amina. For her grandmother Djuljia, on the other hand, “everything is possible with Dodik”. According to her, the “Serbs want this territory, and they have Russia as an example”.

On the road back to Sarajevo, Serb and Bosnian pennants are interspersed, some of them torn. They pass cemeteries of white graves or black crosses; new houses with insulated windows and others burned that no one has stepped on in three decades. A dirty and faded Ukrainian flag hangs near a mosque. On a roundabout, under a large Z painted in pink graffiti, the words Dodik and Putin are written, separated by a heart.