Boris Johnson was no longer stubborn but almost delirious. 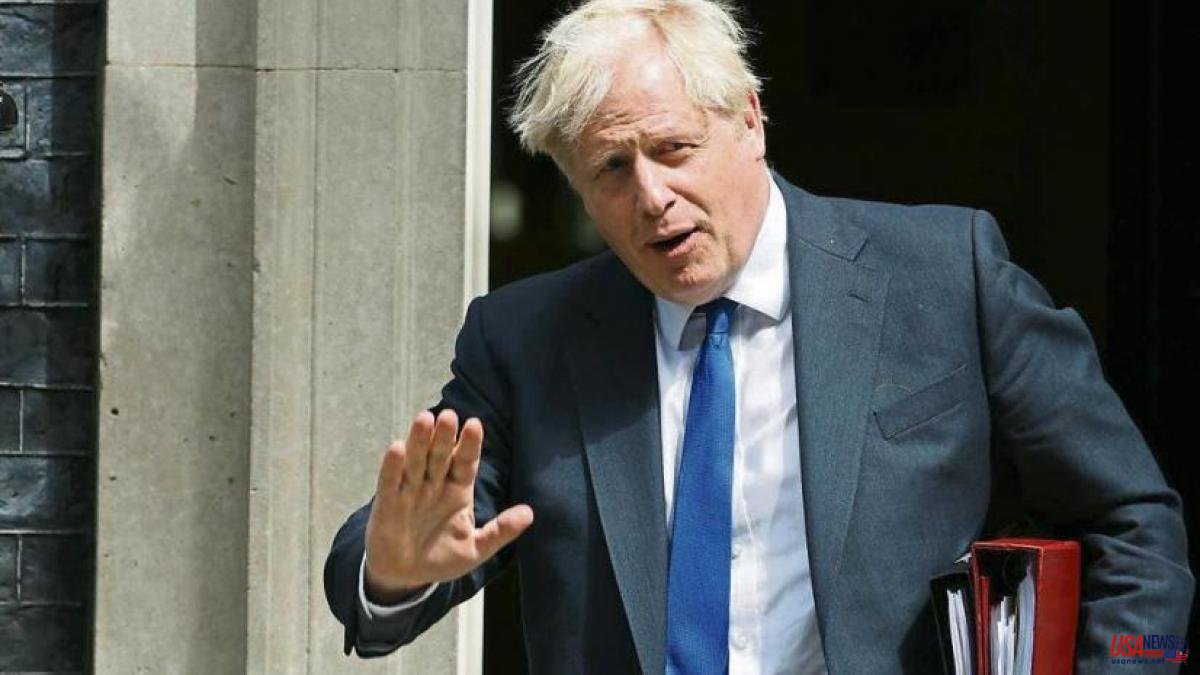 Boris Johnson was no longer stubborn but almost delirious. To get him out of Downing Street, it was not enough that a delegation from the Cabinet itself asked him to do so and the total loss of support from the Conservative Party, but rather it was necessary to enter his office, to which he was nailed like the protesters who tie themselves to the bridges and railways, and put the straitjacket. But he has finally resigned himself to resigning.

"No one is indispensable but it is clear that the Conservative Party wants a new leader - Johnson said in his farewell -. It is a painful moment, but British politics is Darwinian, the survival of the fittest". The Prime Minister has reiterated his theory that this is not a good time for change, with the cost of living crisis and the war in Ukraine, and after all, Labor's lead in the polls is only a few points. But he has recognized that he has not been able to convince his co-religionists to have patience.

He has claimed to have reached an agreement to remain in office on an interim basis until the Tories choose his successor (the timetable will be set next week), but within his own group many think it is better to cut to the chase. "Now things look bad, but the future of the country is rosy," his statement concluded.

Any normal leader would have already seen this Wednesday night that his fate was cast, as in those Greek tragedies that he is passionate about, and in which the characters (Hamlet, Macbeth, Henry V...) have a fatal character flaw that is their perdition. In Boris's it has been arrogance, believing himself to be above others, with some rules for himself and others for the rest of humanity. “If I can't do what I want, why the hell am I prime minister?” he told his former adviser Dominic Cummings on one occasion, when he contradicted her. Nor has a chronic inability to focus on details and a lack of organization and a concrete ideology helped him.

Johnson went to bed ready to continue fighting until the end, with a Numantine resistance. But this morning things immediately took a turn for the worse, and the clocks had not yet struck seven when the Minister for Northern Ireland Affairs, Brandon Lewis, resigned. The barrage of resignations of secretaries of state and general directors has followed, up to fifty, making it obvious that there was no de facto functioning government. The attorney general, Suella Braverman, and the newly appointed finance minister, Nadhim Zahawi, have told him it was time to pack his bags. The head of Education, Michelle Donelan, has left the ship less than forty-eight hours after getting on it.

Even Boris Johnson, whose mental health was beginning to be questioned, has realized that the situation had become unsustainable, and has informed the parliamentary group of his decision to resign as party leader. Now it's about the conditions, the how and the when. His wish is to remain prime minister until the Conservatives choose a replacement, a process that will start immediately with the aim of having someone in charge by the autumn, the man or woman who will lead the Tories to the 2024 election. of positions has already begun. But many insist that he go now.

Succession candidates? All those who have held the main ministries in the Johnson era (Liz Truss of Foreign Affairs, Rishi Sunak and Zahawi himself of Economy, Pritti Patel of Interior, Ben Wallace of Defense, Penny Mordaunt of Commerce, Sajid Javid of Health...), the MPs Tom Tugendhat and Jeremy Hunt… But the list is very open, given the identity crisis of the Conservatives, and it cannot be ruled out that relatively unknown figures will be thrown into the ring, with an agenda to limit measures against climate change and the commitment to shun CO2 emissions to zero by 20250, for example. The return of far-right Nigel Farage is not even impossible, if not in the first person, perhaps in the shadows, as someone's patron.

The Tories, after twelve years in power, have to decide what they are, if they embrace the culture war, a Trump-style English nationalist populism, allergic to the environmental revolution, trans rights and the woke movement but willing to spend public money at large, or they return to their liberal tradition of fiscal prudence, low taxes, few regulations and austerity, a formula with which they have won more elections than any other major European party since 1840.

One reason Johnson prefers to stick around until there is officially a successor is to avoid the ignominy of being overtaken by Theresa May and Neville Chamberlain as the shortest-serving Tory leaders. In his case, for now, 1083 days. Such a hard fall seemed unthinkable when he won the 2019 election with one of the strongest Conservative majorities in forty years, creating a hitherto nonexistent coalition of traditional Tories and working-class ex-Labour from the north of England. It seemed that he was going to revolutionize British politics (he has, but in another, more negative sense), and remain in power perhaps until the 1930s.

Johnson's supporters use the pandemic and the war in Ukraine as an excuse, but the truth is that realpolitik immediately revealed the prime minister's weaknesses. He fulfilled the promise of making Brexit a reality, but with a commitment on Northern Ireland (the permanence of the region in the single market) unacceptable to the unionists and which he was quick to back down, even opening the doors for the United Kingdom to fail to comply. an international treaty. Promises from his manifesto such as equalizing the English north and south, building forty hospitals, investing massively in infrastructure and public services, supporting families and workers, developing the potential of Great Britain or signing beneficial trade agreements, immediately went up in smoke. . Faced with the need to choose between a Keynesian spending and public debt policy and the tax cuts that the traditional wing of the Party was asking for, he opted for both at the same time, as if it were possible.

The contradictions overwhelmed him, and to them were added the loss of by-elections to Labor and the Liberal Democrats, the negative impact of Breexit on trade and the value of the pound, and a succession of scandals; the costs of renovating the Downing Street flat, the support for deputies accused of rape, sexual harassment and watching pornographic videos; and especially the illegal parties in Downing Street, always denying any knowledge of the matter and blaming others until hard evidence forced him to admit responsibility for it. After Everest came K2, and then the Matterhorn, Monte Rosa, Aconcagua, Mount McKinley... One mountain after another mountain and another mountain, in a succession of obstacles that extended into an infinite horizon.

Johnson rose to the top by overcoming the traditional boundaries of the Tories but has fallen not only because of lack of decency and honesty, lies, incompetence, character flaws and political mistakes, but because he was not "conservative enough" in his pursuit of a magic formula to preserve employment during the pandemic, which pushed him towards social-democratic economic approaches that made the axes of his formation screech.

Boris came in style and left in style, like a superhero who has run out of powers and can no longer fly. His place in British history is not going to be the one he dreamed of.