Borges plus Bioy Casares were Biorges

The press of the time used to portray them as a two-headed beast, but the brothers Edmond and Jules de Goncourt – five books and the first three volumes of their Diaries between them – preferred to speak of “one brain to create” and “one hand with our pen at the end. 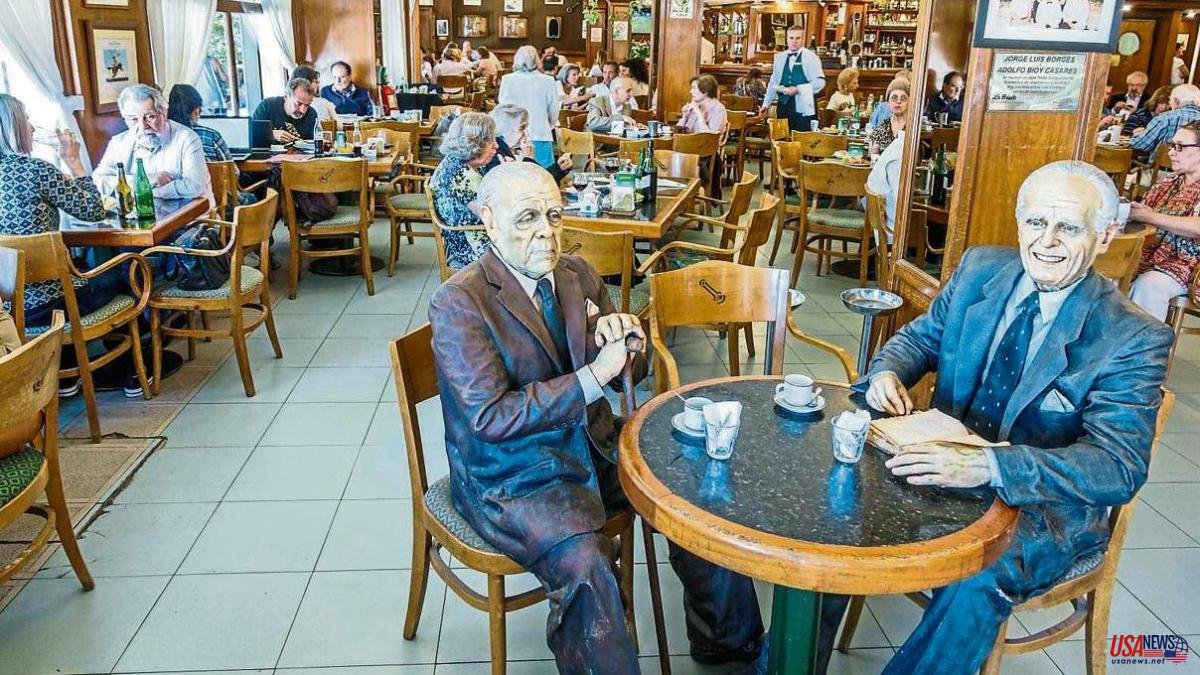 The press of the time used to portray them as a two-headed beast, but the brothers Edmond and Jules de Goncourt – five books and the first three volumes of their Diaries between them – preferred to speak of “one brain to create” and “one hand with our pen at the end.”

“This absolute of the literary, aesthetic, affective, psychological fusion, far from being translated into a writing 'with four hands', ends in a writing 'with one hand only'”, maintain Michel Lafon and Benoît Peeters in Escribir en colaboración; but the question, in that case, is, say Lafon and Peeters, "which hand" is that.

Jorge Luis Borges and Adolfo Bioy Casares would have answered that theirs was not; As Alan Pauls points out in his prologue to Alias, Honorio Bustos Domecq and Benito Suárez Lynch, the heteronyms with which they signed Six problems for don Isidro Parodi (1942), Two memorable fantasies and A model for death (both from 1946), the Crónicas (1967) and the Nuevos cuentos by Bustos Domecq (1977), as well as four film scripts –two of them co-authored with the filmmaker Hugo Santiago and truly exceptional, Invasion and Los otros–, do not belong entirely to Borges or to Bioy.

“Bustos Domecq is one author, one author another”, confirms Pauls; Like Fernando Pessoa's heteronyms, Parodi has his own biography and literary work – which includes credible but reprehensible titles such as La patria azul y blanca and Let's speak more properly! –, in addition to a true and well-known story: in 1935, Borges and Bioy Casares commissioned a “dietary study” on curdled milk – of which they had no knowledge, despite, or precisely because of, the The brochure, included here, is revealing – and they discovered, in doing so, that nothing amused them more than working together, something they would not stop doing until Borges's death.

"What are they going to laugh at?" Silvina Ocampo –the notable Argentine writer, wife of Bioy Casares– wondered when she heard the laughter coming from the room where Borges and her husband were writing; The answer is that of everything and everyone. His was a monstrous writing because it was infrequent and unleashed, and his product, the children of the imagination of that writer that some call “Biorges”, monstrous.

Isidro Parodi, locked up perhaps unfairly in the Buenos Aires Penitentiary and endowed with the talent to solve police cases without leaving his cell, using intelligence. Gervasio Montenegro, an "Argentine gentleman". Marcelo Frogman, "editor and manager of El Malón, 'factotum of the Argentine Aboriginal Association'". The playboy Baulito Perez. The voracious plagiarist César Paladión. Parodi sounds like a parody, but its creators did not limit themselves to burlesque imitation, but also projected their sarcasm onto the claims of a good part of Argentine society, the recently acquired nationalism of its immigrant population, the superficiality and brutalization of its classes. well-to-do, the fatuity of its writers, the absurd loquacity of the porteños...

Borges and Bioy favored stylistic restraint in their books; but Borges plus Bioy is deliciously baroque, and often the plots lie under a huge accumulation of public and private jokes, clumsy euphemisms and linguistic cross-dressing that make them incomprehensible.

The fact that The Victim by Tadeo Limardo and Una tarde con Ramón Bonavena were written by the authors of El perjurio de la nieve or El jardín de senderos que se bifurcan may surprise those who read the texts of Alias ​​for the first time –despite which , as Edwin Williamson points out in his biography of Jorge Luis Borges, the last of these stories was written in the second half of 1941, the same as the first problems of Isidro Parodi–, but that is precisely its grace: literary arithmetic is particular , and in it the sum of one plus one sometimes results in one: a monstrous one. Everything else is in this book and in that extraordinary work of complicity and enthusiasm that is Borges by Bioy Casares, "the" book of Argentine literature of the last decades.