Bono, his wife, Pavarotti and a silent father

The start of the show is long overdue. 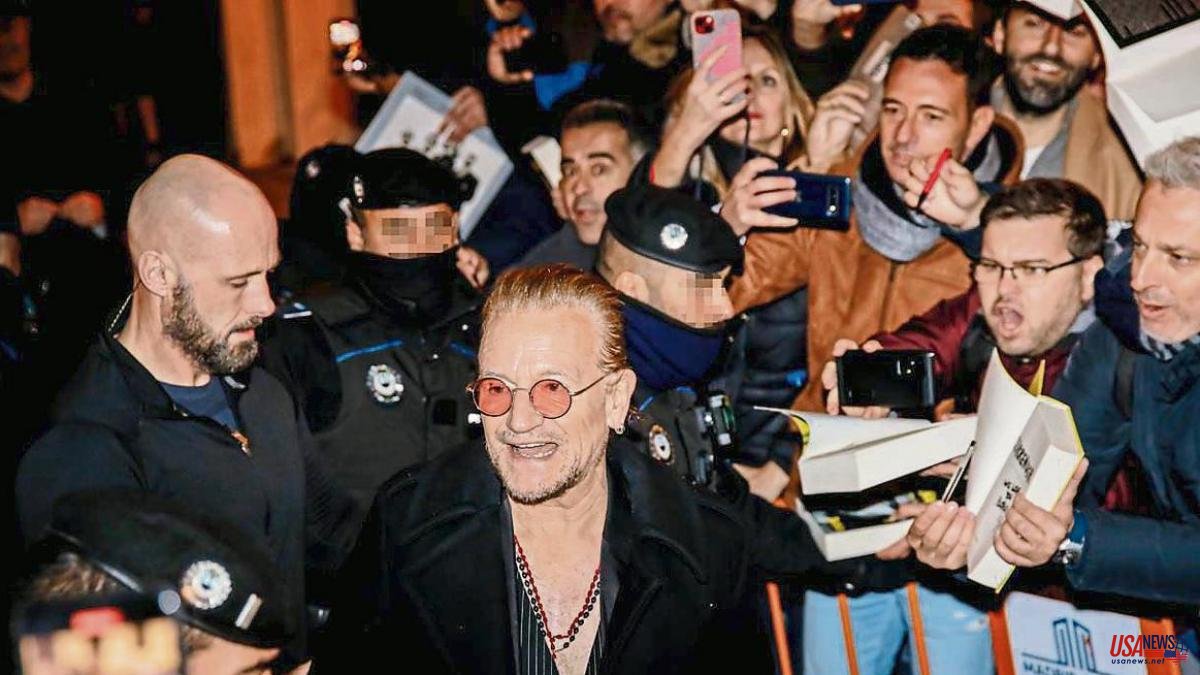 The start of the show is long overdue. The queues on Madrid's Gran Vía are long and move very slowly. Each spectator, each fan, because last night the audience cost 150 euros and that requires a certain degree of commitment, has to deposit their mobile phone at the entrance in a gray bag that, once closed, can only be opened with a device similar to the one pulls the alarms from clothing stores. After that phase, the same spectator will be searched and his bag will be registered. No electronic devices, cameras or cell phones. A show that is also a concert... lived without screens, without even looking at the time, quite a challenge.

And, finally, once through the door of the huge Coliseum Theater, each of the attendees receives the book that is going to be presented in a surprising and exciting way: Surrender (Reservoir books), the memoirs of Bono, the singer, who not leader, as he would clarify later, of U2. A band name that, by the way, as he would also remember later, he still prefers the previous one, The hype. 35 minutes past eight and the show with which he is touring half the world begins. And as soon as Bono comes on stage, after three of his musicians, the audience rises up to applaud him fervently.

Now he can do whatever he wants but the truth is that everything Bono does on stage, he embroiders. Dressed in rigorous black, with a jacket over a vest and no shirt, revealing the necklaces he wears around his neck, with his pink-tinted glasses, Bono begins a daring, poetic, sometimes painful, sometimes hilarious journey through his life. Because of his songs too, of course, because the public is discovering, that's what the 680 pages of his book are about, that his songs have everything to do with his life trajectory. Like With or without you, who sings on stage with the audience going crazy after explaining that it has to do with his relationship with his wife, Alison Stewart, who is in the audience and with whom his changing way of life at some point distanced them.

A wife whom he married very young – they went to live directly, he recalled, from the houses of their respective parents to a peculiar tower in the coastal town of Bray – and who turns out to be, he says at the beginning of the show, a Eurydice capable of descending into the depths to save his Orpheus, that prodigious musician, "from his own hell", "Alison saved me from myself", says Bono who is frequently emotional while evolving on a stage presided over by images and animations almost of comic about the stories he tells.

And what does he interpret? Because Bono sings with power and his songs in the theater and with his explanations sound and feel different. But the public also discovers that he is a great actor who imitates his bandmates, his father, or Luciano Pavarotti – total protagonists, the last two, of the fascinating evening – without blinking, to perfection, causing hilarity. Or causing awe when he gets on the table – there is barely a table, a few chairs and the musicians and their instruments on stage – to interpret himself looking from the ceiling of the operating table, in 2016, at the Mount Sinai Hospital in New York, with that heart that bursts and with that lack of air that grips him. He raises his fists, squirms slowly. He could be in a Shakespeare and it wouldn't be too out of place.

The beginnings of the band come out, his fascination with Joey Ramone and he sings Out of control, his Christianity appears and he sings Sunday bloody Sunday, the Live Aid concerts arrive and he sweeps with Pride (In the name of love). But above all, above all, the absence of his mother Iris appears on the scene again and again, whom he last saw alive was at the age of 14 at his grandfather's funeral, where she suffered an aneurysm –" everything is very Irish”, he jokes – and, above all, the impossible conversations with his father, a tenor, to whom he repeatedly asks for attention without success and who is silent and skeptical about the career his son is pursuing.

And to whom he will finally be able to connect thanks to Pavarotti –it is hilarious when he imitates the diva on the phone, “Bono, Bono, Bono”, with an Italian tenor accent–, who literally bundles him up to perform at a great charity concert in Modena to which he will manage to bring his father, who will agree to go because, after all, he thinks his son is only "a baritone who thinks he is a tenor". There are a thousand anecdotes with him, they go through Lady Di -of whom her anti-royal father falls in love when he meets her, "800 years of oppression were erased in 8 seconds, and then they ask what royalty is useful for"- and of course they end with the U2 singer singing a powerful opera aria in his honor, Torna a Surriento.

And although Bono admits at the beginning of the show that writing memoirs is absurd and that taking them on stage is already a higher level than looking at one's navel, last night he showed in Madrid that, naked, truly felt, just as he said that the songs have From first moving the singer and then moving the audience, some memories can produce truly epic evenings.